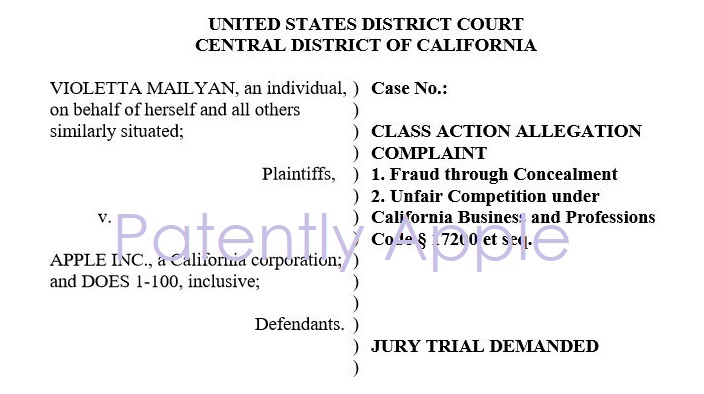 The eight and ninth Class Action lawsuits have been filed against Apple in California and New York respectively for purposely slowing iPhones over the years. In the first class action filed by Violetta Mailyan and her lawyers, they're shooting for the moon by demanding the off-the-wall amount of $999,999,999,000. In the second class action that was filed in New York by Raisa Drantivy and her legal team, they're humbly demanding a mere $100,000,000. I mean in light of Violetta's $999 Billion, it's a bargain, right?

Considering that Samsung will launching a new mid-class A8 series smartphone in January and their high-end Galaxy S9 in February, you could count on Samsung taking a couple of shots at Apple over this issue. It's just in their nature.

The following is in-part from Violetta Mailyan's class action. It's from the segment of the lawsuit titled 'Class Action Allegations.'

Plaintiffs' claims are typical of the claims of the Class. Each member of the Class had to buy a newer iPhone model because the performance of their older iPhone model had slowed down as a result of Defendant's purposeful conduct. Each member of Class was denied the use, utility and value of the older iPhone model because of the slowdown of performance. The injuries of the Plaintiff and Class are identical, and Plaintiff's claims for relief are based upon the same legal theories as the claims of other Class members.

The ninth Class action lawsuit filed against Apple was filed by Raisa Drantivy in the Eastern District Court of New York with six causes listed:

Cause 01: Breach of Implied Contract

Cause 02: Trespass to Chattel

Cause 05: Deceptive Business Acts and Practices

The plaintiff in this case, as in all cases, recounts Apple's updates over the years that stated such things as follows: "Defendant's 'update' descriptions expressly specified and recommended that Plaintiff and other iPhone users should download and install the 'updates' to 'fix bugs and issues' as well as 'increase performance' on the iPhone 5."

At a later point under the 'Substantive Allegations' segment it states:

"Plaintiffs and Class Members have owned and used defendant Apple's product, iPhones, for a number of years.

Defendant alleges that its battery may retain up to 80 percent of their original capacity at 500 complete charge cycles.

Defendant alleges that it slows down iPhone processors when the battery is wearing out.

Defendant never requested consent or did Plaintiffs at any time give consent for Defendant to slow down their iPhones.

Plaintiffs and Class Members were never given the option to bargain or choose whether they preferred to have their iPhones slower than normal.

Plaintiffs and Class Members suffered interferences to their iPhone usage due to the intentional slowdowns caused by Defendant.