While Apple's Patent for an iPhone with a Glass Back is fulfilled, Apple Legal Updates the Patent's Claims 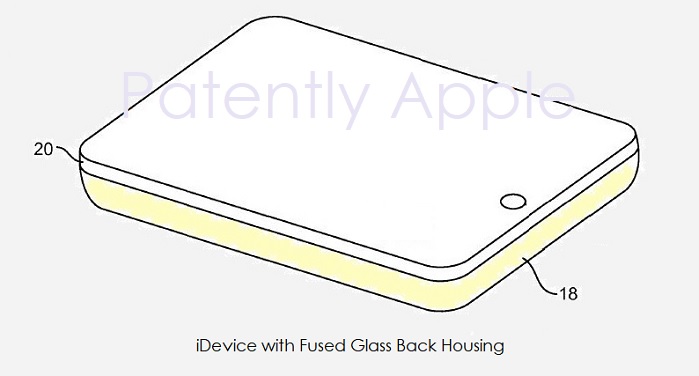 Apple was granted a patent in September for glass device housing in-part or in whole. Our cover graphic illustrates one of Apple's patent figures showing an iDevice with a glass backing highlighted in yellow. Technically this becomes a patent fulfilled in-part with the introduction of Apple's iPhone 8 and iPhone X using a glass back panel to assist wireless charging. Apple's patent also describes future iDevices that could be entirely made of glass with no metal supports.

Although Apple has already been granted a patent for this invention, today's application is a continuation patent (20170318686) where Apple legal has updated the inventions patent claims.

The new claims de-emphasize the thickness of the glass to be used. With the iPhone 8 and iPhone X using a back glass as this patent covers, the glass thickness restriction may have had to be de-emphasized to keep the invention legally protected.