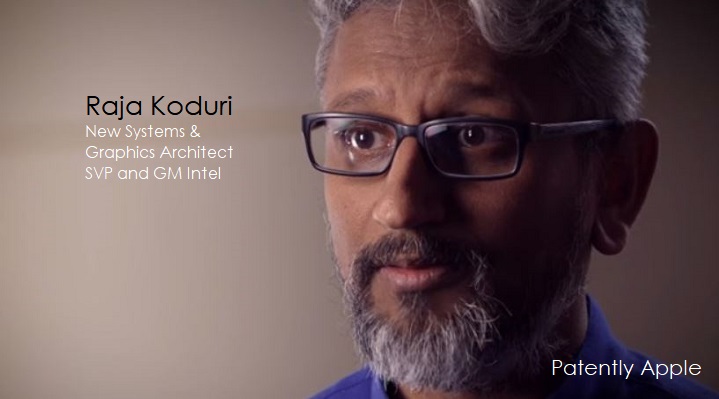 What a strange week it was for Intel and AMD. On Monday Patently Apple posted a report titled "Intel Surprises the Market with a combined Intel-AMD Processor GPU Package for 2018 Smaller Form Factor Devices." While the new architecture could eventually pop into a future MacBook or Mac Mini, its primary market will be giving thinner lighter 2-in1 hybrid devices the graphics power of a top notebook for gaming and VR experiences sometime in Q1 2018.

One prototype that Intel presented using the new architecture showed a new area above the device's keyboard that would allow a user to use a stylus for artwork or to scribble notes on a document. See Intel's prototype below along with a patent pending invention Apple filed for in 2012. 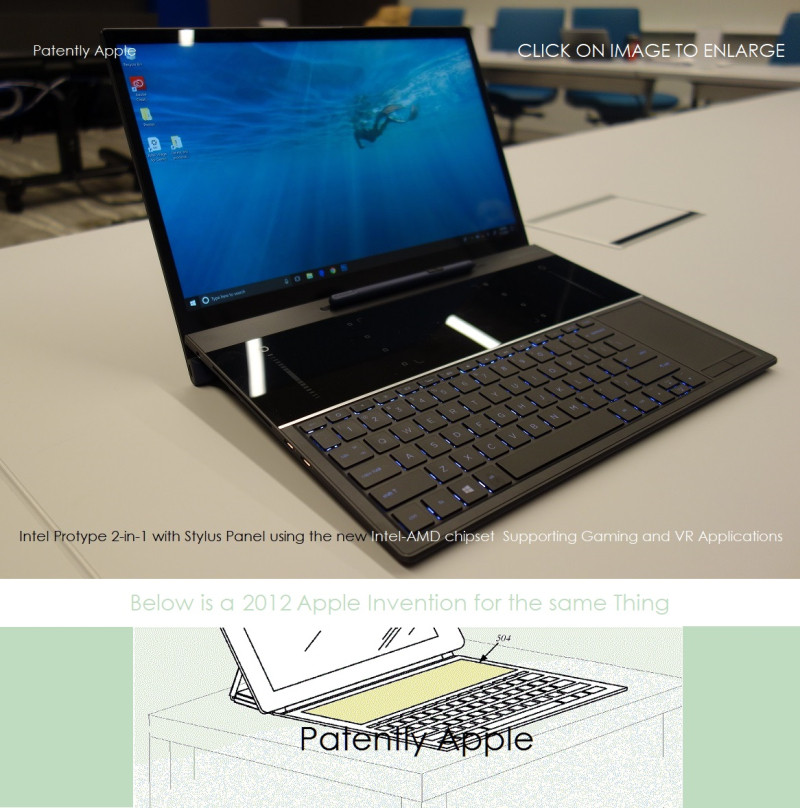 So on one hand we saw Intel and AMD sing Kumbaya and collaborate on a solid graphics solution that will uniquely serve the mobile hybrid device market to take on Nvidia.

On the other hand, we learned that Intel just sawed off AMDs right arm by hiring away their lead graphics guru. On Thursday Intel dropped the bombshell in a press release stating:

"Intel today announced the appointment of Raja Koduri as Intel chief architect, senior vice president of the newly formed Core and Visual Computing Group, and general manager of a new initiative to drive edge computing solutions. In this position, Koduri will expand Intel's leading position in integrated graphics for the PC market with high-end discrete graphics solutions for a broad range of computing segments.

"Raja is one of the most experienced, innovative and respected graphics and system architecture visionaries in the industry and the latest example of top technical talent to join Intel," said Dr. Murthy Renduchintala, Intel's chief engineering officer and group president of the Client and Internet of Things Businesses and System Architecture. "We have exciting plans to aggressively expand our computing and graphics capabilities and build on our very strong and broad differentiated IP foundation. With Raja at the helm of our Core and Visual Computing Group, we will add to our portfolio of unmatched capabilities, advance our strategy to lead in computing and graphics, and ultimately be the driving force of the data revolution."

Prior to AMD, Koduri served as director of graphics architecture at Apple Inc., where he helped establish a leadership graphics sub-system for the Mac product family and led the transition to Retina computer displays (April 2009-March 2013)."

With Nvidia hitting an all-time record high yesterday after the chip maker delivered third quarter financial results that crushed Wall Street's expectations in an upside surprise that Mark Lippacis at Jefferies called "tectonic." Nvidia's has more than tripled in value in the last 12 months and Intel wants in on the action for serving the AI and automobile market as well as for PC's that will support the next wave of VR and AR experiences on PC's and Macs and especially future models of the new iMac Pro.

Intel's move shows that they want to be up and running as quickly as possible in high-end discrete graphics solutions to take Nvidia head on in various markets where Nvidia is running away with. It could be another area that would allow them to earn more of Apple's Mac business as well.