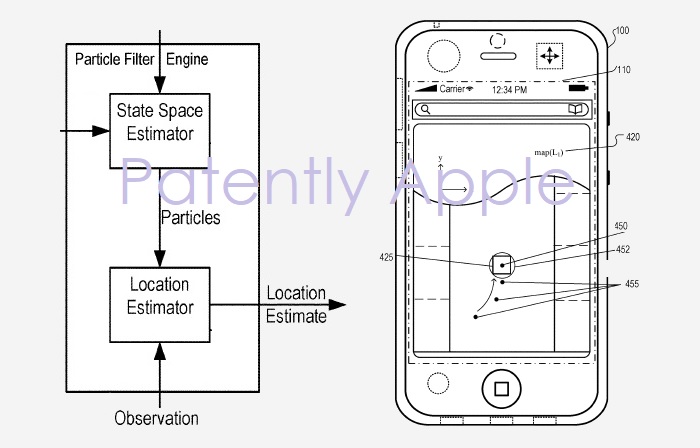 In September Patently Apple posted a report titled "More Patents are fulfilled as Apple's iOS 11 introduces us to Indoor Mapping." Apple noted that with iOS 11 you're now able to see "detailed maps of major airports and shopping centers around the world. Find out which restaurants are past security at the airport or which stores are on level three of the mall." Our September report illustrated one major patent on this and today Apple was granted a more sophisticated patent regarding indoor mapping. 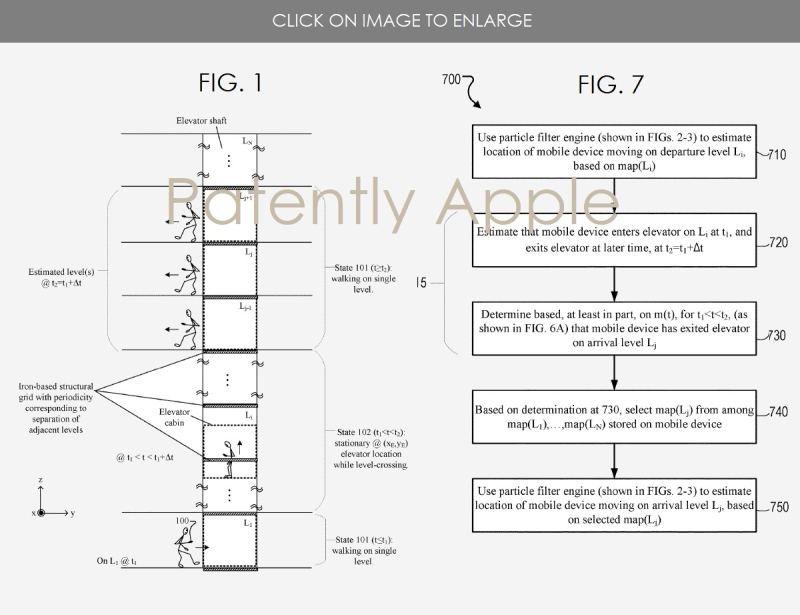 Apple's patent FIG. 1 above illustrates a user of a mobile device that enters an elevator on a departure level of a multilevel building and exits the elevator after a time interval at an arrival level, different from the departure level. An indoor location estimator implemented on the mobile device estimates that the arrival level is one of a subset of levels of the multilevel building. The estimated level is obtained based, at least in part, on a periodic magnetometer signal formed by a magnetometer of the mobile device. In this example, the periodic magnetometer signal is formed due to the magnetometer traveling along an iron-based structural grid with periodicity corresponding to separation of adjacent levels.

Apple's patent FIG. 7 shows an example of a technique for estimating, based on a magnetometer signal formed during an elevator trip, a floor on which the elevator trip of mobile device ends. Apple's patent FIGS. 2 and 3 show aspects of an example of a location estimation system that uses a particle filter--having inputs that include (1) sensor signals formed on sensors of the mobile device, and (2) one or more level floor plans stored by the mobile device--to estimate location of the mobile device while moving on and/or crossing corresponding levels of the multilevel building.

Apple's patent FIG. 4 above shows us a graphical user interface (GUI) that includes a map of a departure level indicating a path traveled by a mobile device to an estimated location of the mobile device inside an elevator.

Apple's granted patent. 9,832,617 was originally filed in Q1 2016 and published today by the US Patent and Trademark Office. Rob Mayor, Apple's Director of Location Technologies is noted as the sole inventor of this invention.