Amnesty International Says Apple Leads the way in Tracing Cobalt Mines that use Child Labor, but more Action is needed 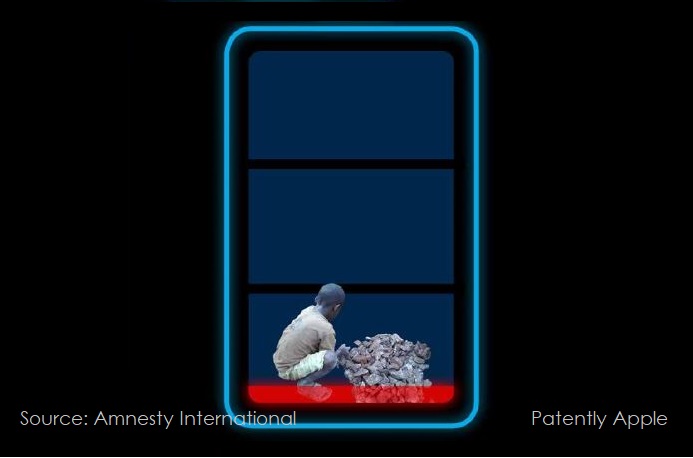 In March Patently Apple posted a report titled "Apple Caught in another Controversial Story about Supporting Slave and Child Labor in Congo." The report covered a brutal story with Apple being in a bad light on the issue of children miners and Apple buying materials from these artisanal mines. We noted that the Washington Post has reported that stating that "Last year, Apple pledged to clean up its cobalt supply chain, but the technology giant said it wanted to avoid hurting the Congolese miners by cutting them off. Mining provides vital income for hundreds of thousands of people in what is one of the world's poorest countries. Now, Apple says it has stopped — for now — buying cobalt from artisanal mines."

In April I did a follow up report titled "Apple Sets Goal to Stop Mining for Minerals to make iDevices even though they don't know how they'll do it."

While Apple is leading the way in tracing cobalt used in its electronics to ensure the metal has not been mined by children in Democratic Republic of Congo in contrast to tech companies like Microsoft and Sony, a new report by Amnesty International says the bar is set too low.

Seema Joshi, Head of Business and Human Rights at Amnesty International stated in the report that "Our initial investigations found that cobalt mined by children and adults in horrendous conditions in the DRC is entering the supply chains of some of the world's biggest brands. When we approached these companies we were alarmed to find out that many were failing to ask basic questions about where their cobalt comes from.

Nearly two years on, some of the richest and most powerful companies in the world are still making excuses for not investigating their supply chains. Even those who are investigating are failing to disclose the human rights risks and abuses they find. If companies are in the dark about where their cobalt comes from, so are their customers.

This is a crucial moment for change. As demand for rechargeable batteries grows, companies have a responsibility to prove that they are not profiting from the misery of miners working in terrible conditions in the DRC. The energy solutions of the future must not be built on human rights abuses."

The number one abuser has been identified as a Chinese processing company called Huayou Cobalt whose products then end up in the batteries that are used to power electronics and electric vehicles. 'Time to Recharge' assesses the progress that Huayou Cobalt and 28 companies potentially linked to it are buying cobalt from the DRC. 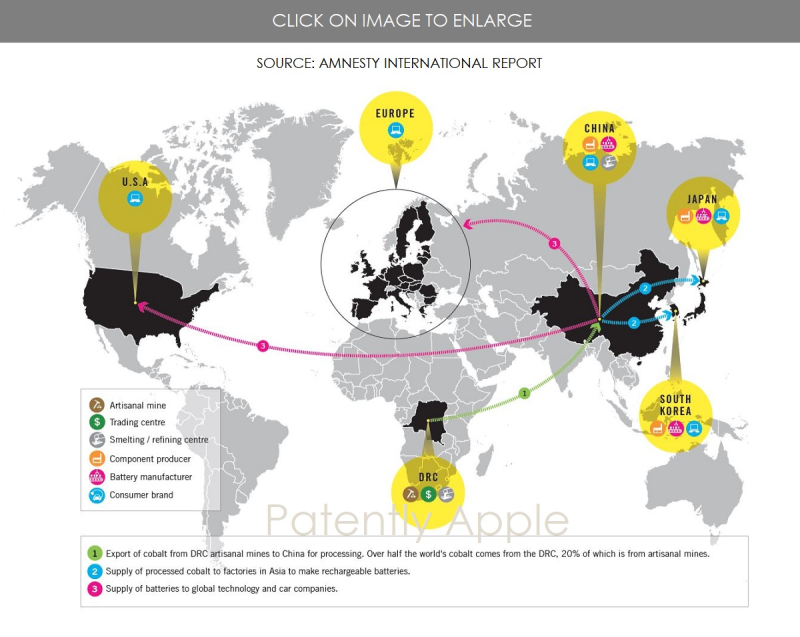 Apple and other Tech Companies

The report further noted that "Earlier this year, Apple became the first company to publish the names of its cobalt suppliers, and Amnesty's research shows it is currently the industry leader when it comes to responsible cobalt sourcing. Since 2016, Apple has actively engaged with Huayou Cobalt to identify and address child labour in its supply chain.

Dell and HP have shown signs of potential. They have begun to investigate their supply links to Huayou Cobalt, and also have in place some of the stronger policies for detecting human rights risks and abuses in their cobalt supply chains. But other major electronics brands have made alarmingly little progress.

Microsoft, for example, is among 26 companies that have failed to disclose details of their suppliers, like the companies who smelt and refine the cobalt they use. This means Microsoft is not in compliance with even the basic international standards.

Lenovo also performed badly, having taken only minimal action to identify human rights risks or investigate its links to Huayou Cobalt and the DRC. Across the board there is a lack of transparency; companies are not disclosing their assessments of the potential for human rights abuses in their supply chains, or of their suppliers' own due diligence practices.

For example, while Apple and Samsung SDI have identified their smelters, they have not publicized their assessments of the risks associated with those smelters. This makes it impossible to say whether they are fulfilling their human rights responsibilities.

Companies funding research on this issue consider it to be part of their risk-mitigation and remediation strategies. For example, Apple told Amnesty International that, "independent, rigorous research into root causes of issues in the DRC affecting cobalt mining practices is an essential component to building effective prevention or remediation programs."64 This is good practice. Nevertheless, where harm has occurred, companies must do more to remediate the worst forms of child labor if they have contributed to and benefitted from it.

And lastly, the report noted that the biggest abusers of using mines with child labor are electric car makers. Amnesty International's previous research exposed a significant risk of cobalt mined by children in the DRC ending up in the batteries of electric cars. The progress report shows that electric vehicle companies are lagging behind other sectors when it comes to cleaning up their batteries.

Renault and Daimler performed particularly badly, failing to meet even minimal international standards for disclosure and due diligence, leaving major blind spots in their supply chains. U.S. Tesla is shown on the chart above as taking 'moderate' action. 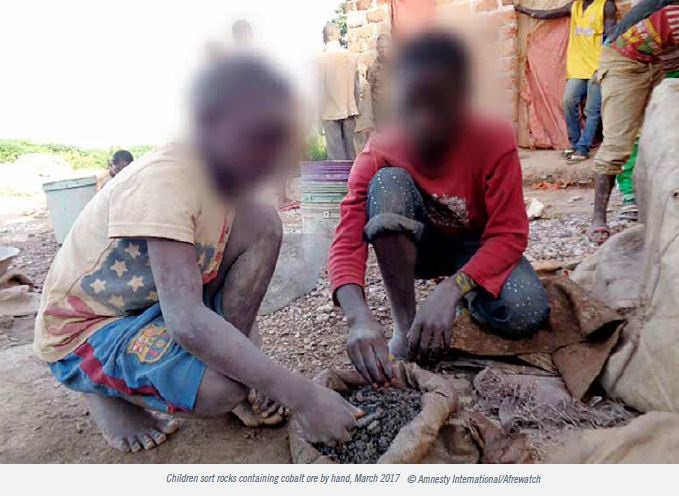 For those wishing to learn more about this issue, Patently Apple is providing you with a full copy of the Amnesty International report below titled "Time to Recharge."