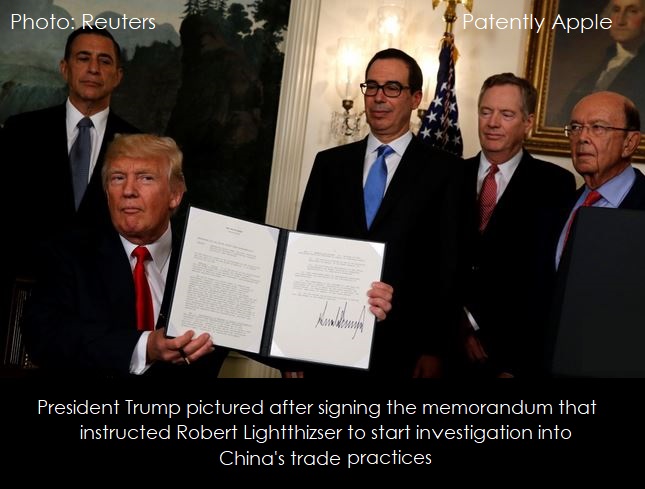 The South China Post is reporting that US industry groups representing Apple, IBM and other tech giants have blamed China's rules on inbound investment for infringing the intellectual property rights of US companies.

Repeating a complaint likely to top the agenda during US President Donald Trump's upcoming visit to Beijing, the advocacy groups spoke in a public hearing convened to gather input for an ongoing trade investigation.

Erin Ennis, senior vice-president of the US-China Business Council, told the hearing in Washington that rules that required them to transfer technology to Chinese enterprises "as a condition to gain market access" might place "unreasonable and discriminatory burdens" on American commercial interests.

The event was the first hearing in support of US Trade Representative Robert Lighthizer's inquiry into alleged Chinese intellectual property theft under Section 301 of the US Trade Act of 1974.

Trump, who is expected to visit his Chinese counterpart Xi Jinping next month, ordered Lighthizer to start the investigation in mid-August.

"We will stand up to any country that unlawfully forces American companies to transfer their valuable technology as a condition of market access," Trump said in Washington after signing an executive order authorising the investigation.

Ennis told the hearing that the "the ultimate goal" was to eliminate technology transfer requirements, calling them "an acute concern of American companies in key sectors, who often must make difficult choices about managing the trade-off of technology sharing and access to the world's second-largest economy". For more on this story read the full South China Morning Post report here.

In July Patently Apple posted a report titled "Apple to Comply with China's Cyber Security Law by Partnering with 'Guizhou-Cloud' to Set Up new Data Center." Apple noted in a statement that "These regulations require cloud services be operated by Chinese companies so we're partnering with GCBD to offer iCloud." Apple was quick to point out back then that "No backdoors will be created into any of our systems."