Home Archives Contact Us Subscribe Twitter MeWe Facebook Patently Mobile
Apple Signs onto the Bain Capital Deal for Toshiba Memory without Details of their Negotiated Terms Revealed
One of Apple's Detailed HomePod Patents may have surfaced Today at the U.S. Patent Office

On the day of Apple's special iPhone event introducing iPhone 8 and iPhone X Samsung decided to try to change the subject as noted in our report titled "Samsung Attempts to Downplay Apple's new iPhones by Committing to a Foldable Note Smartphone for 2018." The debate as to when Samsung would bring their first folded smartphone has been covered in many of our reports over the year (one, two, three and four). Our April report was titled "Samsung will reportedly field test foldout smartphones this fall." After testing, Samsung apparently has decided to go back to their original "Fold-In" smartphone concept.

One of many designs on this front from Samsung is presented in our cover graphic which was covered in a Patently Mobile report back in January. One of Samsung's more elaborate patents on this kind of smartphone design was detailed in a Patently Mobile report posted back in December 2013 (when our site other blog was still called Patent Bolt). One of images from that report is noted below. 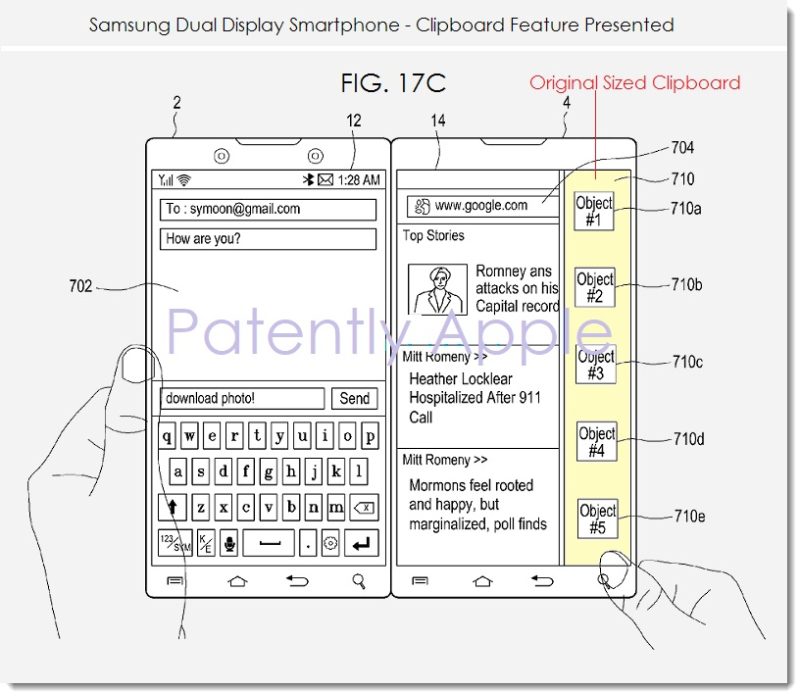 Today Samsung is getting the news out through several Korean tech site reports that they've decided to go with a fold-in smartphone design. In our September 12 report we quoted Samsung's mobile division chief Koh Dong-jin stating that "Samsung has the foldable smartphone in its roadmap for the Note series and is currently working to solve a series of hurdles before unveiling it next year. Samsung will not roll out the foldable smartphone as a stopgap product, but as a well-made flagship that can appeal to consumers."

Korea's Etnews reports today that "Samsung Electronics recently restarted developing in-folding foldable Smartphones with Samsung Display and its goal is to implement 3R in curvature of a display. 3R is a number that shows how much a display is bent and it indicates curvature that covers a circle with a radius of 3mm.

It is heard that Samsung Electronics was going for in-folding method when it just started developing foldable Smartphones and it had carried out many years of R&D on displays, parts, and materials that are related to in-folding method.

However it suddenly changed its direction of its project towards 'out-folding' method. It started developing Smartphones that can be folded outwardly instead of inwardly.

All of these changes in direction of foldable Smartphone project took place just 1 to 2 years ago. Until last year, development of out-folding foldable Smartphones was the biggest task for Samsung Electronics, Samsung Display, and other businesses that were in participating in this project.

Exact reason why Samsung Electronics changed direction of its foldable Smartphone project again is not known. However fact that it switched back to in-folding method, which was its initial project, indicates that it is now at a level where it can start working on a commercialization process of foldable Smartphones."