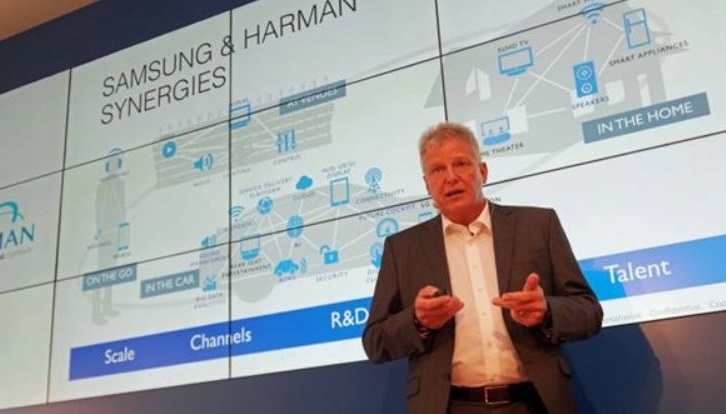 Patently Apple posted three reports (01, 02 and 03) last month on the news that Samsung will soon be entering the smart speaker business to compete with Apple, Google, Amazon and others. One of the reports covered an elaborate design stemming from one of Samsung's recent patent filings. Yet to get to market quickly, it appears that Samsung is working with their recently acquired Harman Kardon on their first generation smart speaker system.

The "Combination of Harman and Samsung is a perfect setup," said President Mauser, adding that "We have created the most comprehensive connected company by combining our audio and sound control technologies with Samsung's strengthens in mobile, semiconductor, and AI."

Yoon Boo-keun, president and CEO of consumer electronics business at Samsung Electronics, held a confidential meeting earlier this month with Harman International CEO Paliwal to cement their collaboration on next year's smart speaker from Samsung.

Paliwal said in a recent interview that "A significant level of joint research and development of the device is underway. The Samsung speaker will have a better AI platform than Google Assistant and Amazon's Alexa."

As we reported on in August, the Harman CEO stressed that the Samsung speaker would be a complete platform that supports operations of all kinds of home appliances and mobile devices, the ultimate goal of which is to establish an AI ecosystem.

Commenting that Samsung is already a company "better than Google and Microsoft" with sophisticated home appliances and wireless products and services, Paliwal said it would be unbeatable when the Samsung AI ecosystem is launched.

Apple's entry into the smart speaker market with HomePod will begin to roll out in the US, UK and Australia this December. As a home assistant, HomePod will be a great way to send messages, get updates on news, sports and weather, or control smart home devices by simply asking Siri to turn on the lights, close the shades or activate a scene. When away from home, HomePod is the perfect home hub, providing remote access and home automations through the Home app on iPhone or iPad. Apple's HomePod supports the HomeKit framework.

Apple's Siri speaks 21 languages localized for 36 countries while Samsung was proud to tell the world during their Note 8 keynote in New York on August 23 that Bixby now speaks English in more than 200 countries; talk about nonsensical babel.

A smart speaker system being limited to English isn't going to win the market over. So this is a potentially huge disadvantage that their home speaker system may have on day one if they can't dramatically improve on that blatant weakness.

Another weak point is that Samsung is convinced that they'll win in the home market just because they make appliances. That's a pipe dream at best. Most home owners usually choose from a wide variety of branded appliances, so this is unlikely to provide them with much of an advantage, outside of their own cult following.

In the end both Apple and Samsung will do well within their respective ecosystems, but the notion that Samsung will conquer the world because they make home appliances is exaggeration at its finest.