One of Apple's Detailed HomePod Patents may have surfaced Today at the U.S. Patent Office 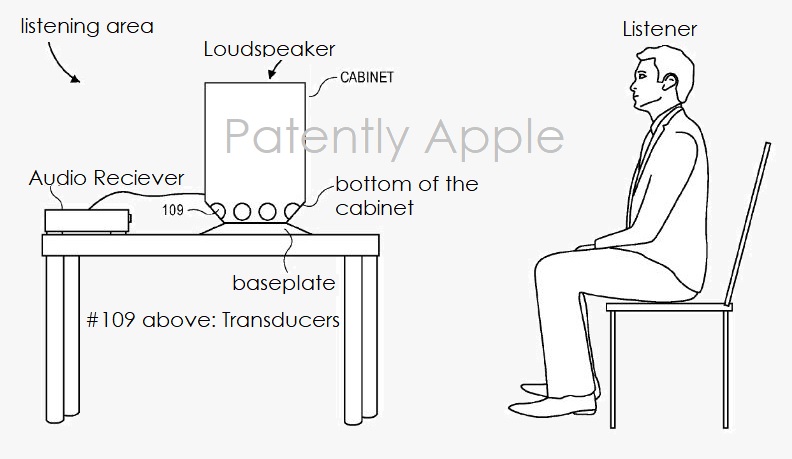 Earlier today Patently Apple posted the first of two major audio patent application reports titled "Apple Reveals a Future Stereo System that Automatically Readjusts Sound when Speakers are moved or Added." Apple's second patent application published today by the U.S. Patent Office is titled "Loudspeaker with Reduced Audio Coloration caused by Reflections from a Surface." Apple's invention, as their title reflects, relates to reducing the effects caused by reflections off a surface on which the loudspeaker is resting, be it the floor or a desktop. Unlike our earlier report that described a camera within a speaker that is used to reset audio parameters when a speaker is moved, the nature of this invention could very well be the foundation for Apple's HomePod.

Apple's patent FIG. 12 juxtaposed to Apple's HomePod shown below illustrates the stand in patent figure simply hidden under the HomePod's mesh cover. The patent reveals that Apple contemplated many design types and speaker configurations before choosing its final design which would be covered in design patent not a utility patent such as the one published today.

Of course with Apple, this may only be one of a few patents covering their product invention in total. For instance, Apple may have filed another patent for the HomePod's mesh encasing along with others. 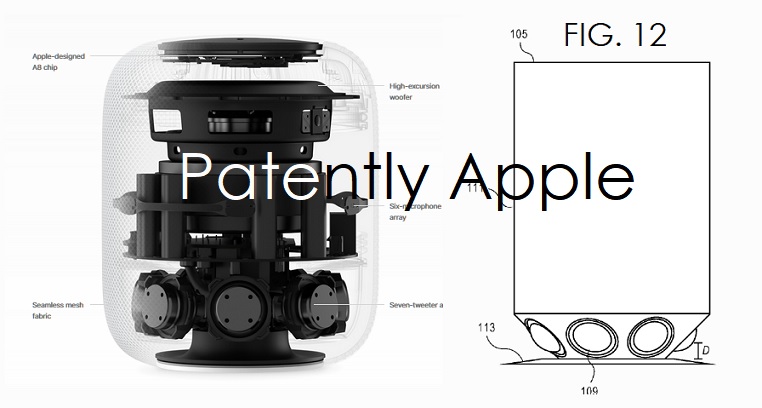 Loudspeakers may be used by computers and home electronics for outputting sound into a listening area. A loudspeaker may be composed of multiple electro-acoustic transducers that are arranged in a speaker cabinet. The speaker cabinet may be placed on a hard, reflective surface such as a tabletop. If the transducers are in close proximity to the tabletop surface, reflections from the tabletop may cause an undesirable comb filtering effect to a listener. Since the reflected path is longer than the direct path of sound, the reflected sound may arrive later in time than the direct sound. The reflected sound may cause constructive or destructive interference with the direct sound (at the listener's ears), based on phase differences between the two sounds (caused by the delay.)

Apple's invention relates to a loudspeaker with a ring of transducers that are aligned in a plane, within a cabinet. In one embodiment, the loudspeaker may be designed to be an array where the transducers are all replicates so that each is to produce sound in the same frequency range. 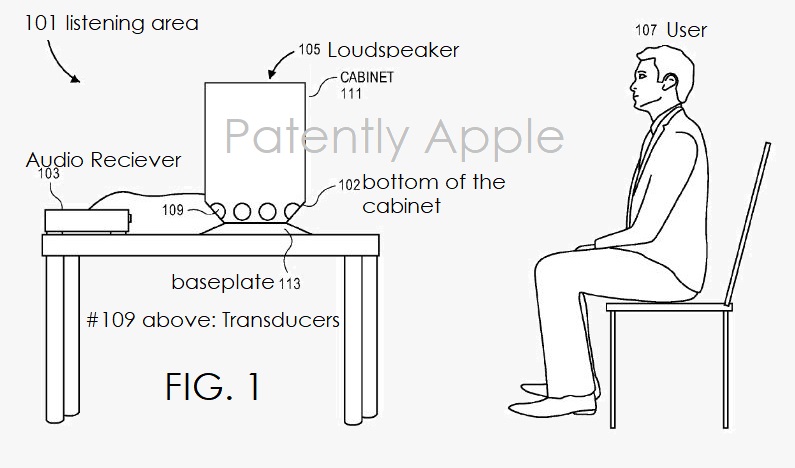 Sound emitted by the transducers may be reflected off the baseplate or other reflective surface on which the cabinet is resting, before arriving at the ears of a listener, along with direct sound from the transducers.

The predefined distance may be selected to ensure that the reflected sound path and the direct sound path are similar, such that comb-filtering effects perceptible by the listener are reduced. In some embodiments, the predefined distance may be selected based on the size or dimensions of a corresponding transducer or based on the set of audio frequencies to be emitted by the transducer. 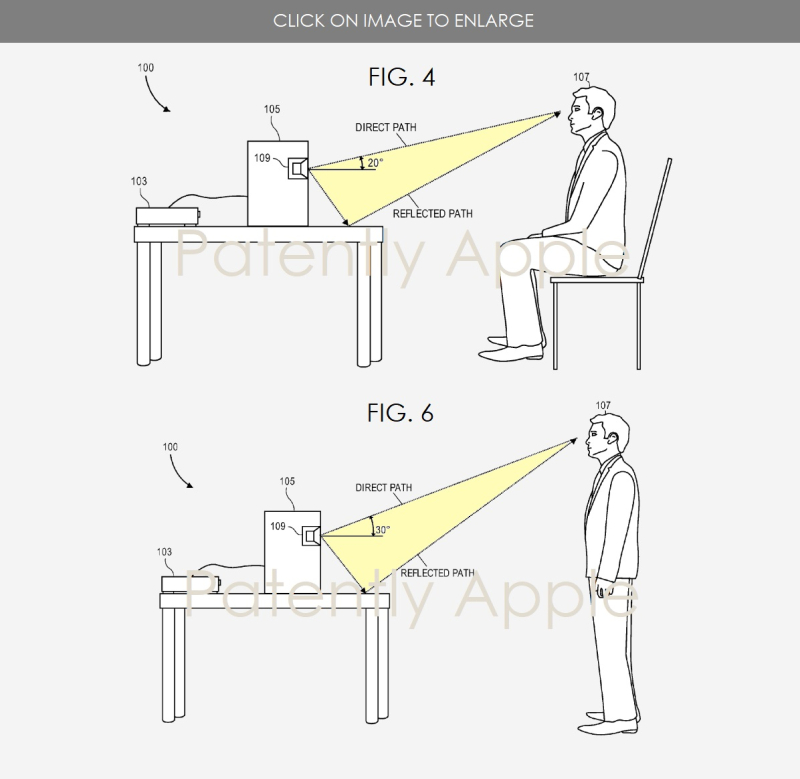 Apple describes in patent FIG. 4 that sound emitted by the transducers #109 may be spread vertically with minimal limitation. In this scenario, the head or ears of the listener (#107) are located approximately one meter and at a twenty degree angle relative to the ring of transducers in the loudspeaker #105.

Since the reflected path is indirect and consequently longer than the direct path in this example, a comb filtering effect may be detected or perceived by the listener. A comb filtering effect may be defined as the creation of peaks and troughs in frequency response that are caused when signals that are identical but have phase differences are summed.

When the listener goes from sitting to standing there's a rapid change that requires the transducers to move with elevation or angle (degree) change, as the path length differences between direct and reflected sound changes rapidly based on movement of the listener.

For example, the listener in FIG. 6 may stand up such that the listener is at a thirty degree angle or elevation relative to the loudspeaker instead of a twenty degree elevation as shown in FIG. 4. 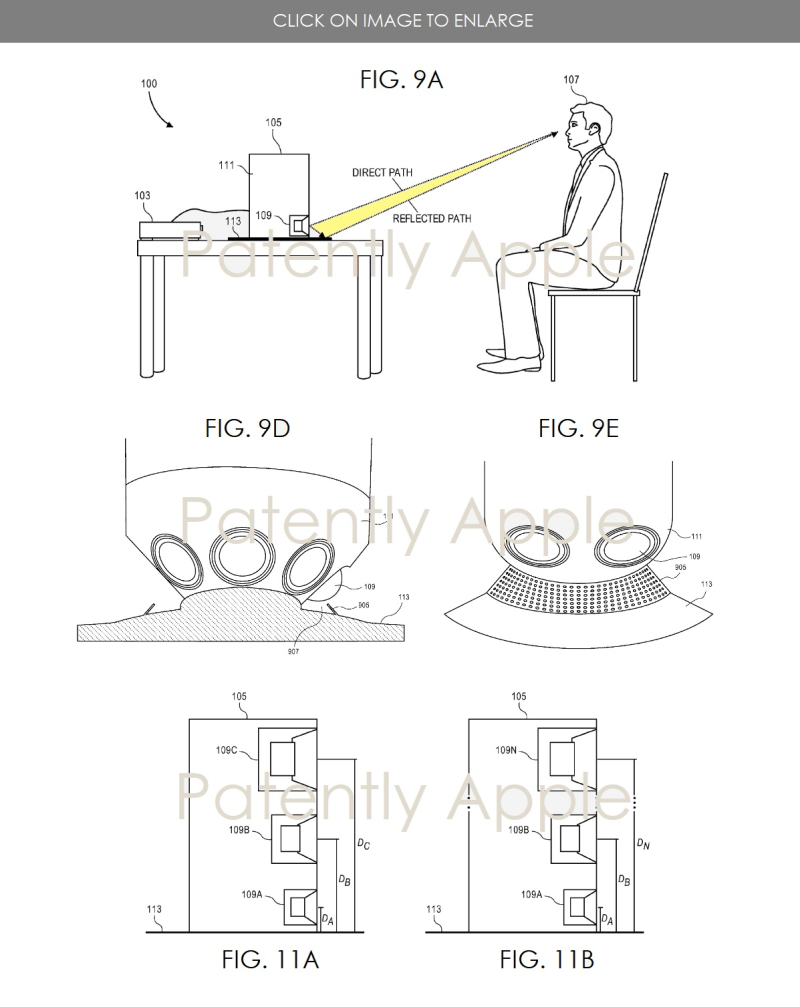 Apple's patent FIG. 24 illustrated below shows us a cutaway view of a cabinet for a loudspeaker in which phase plugs are used to place the effective sound radiation area of the transducers closer to a reflective surface. 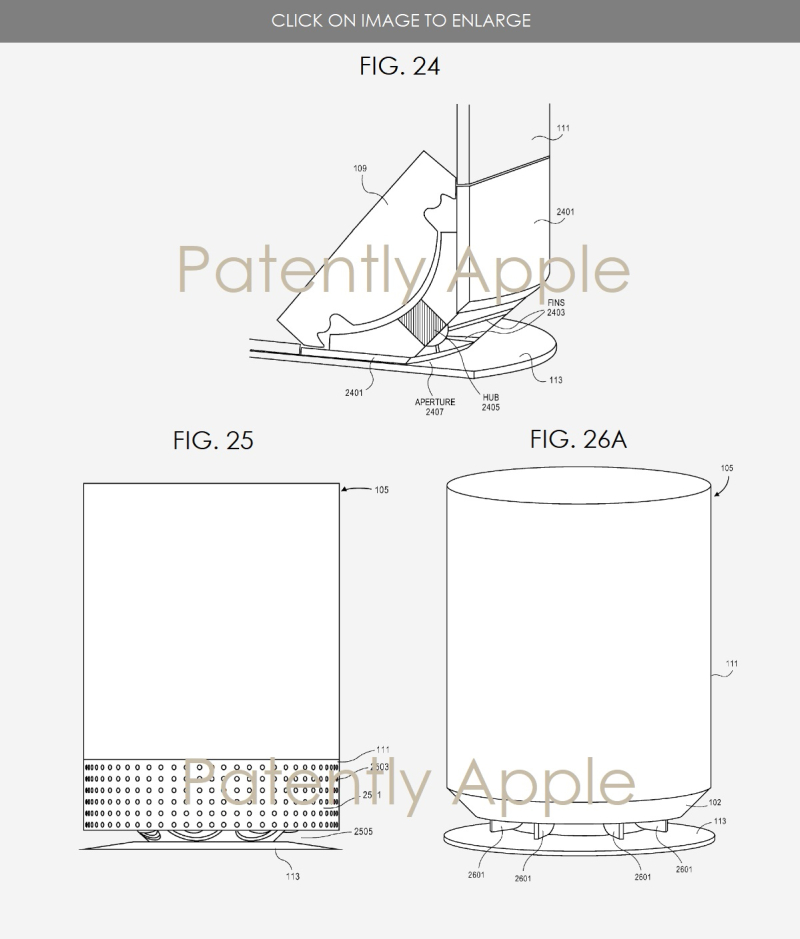 Apple's patent application 20170280231 was filed back in Q1 2017. This is likely the first of a few HomePod related inventions to follow.