Microsoft Invents Deformable Sensors for use in future Surface Devices, HoloLens and even an annoying Smart Couch 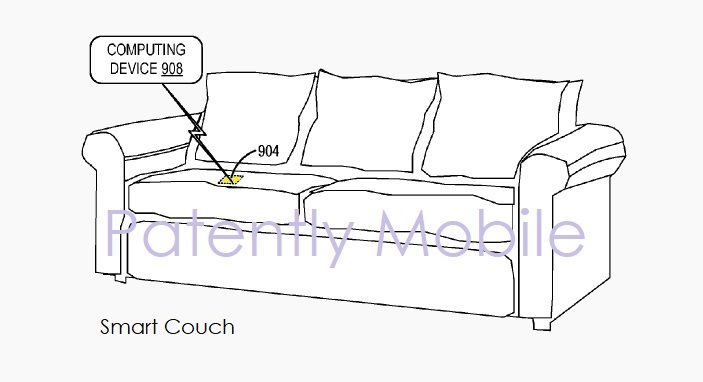 In late August the U.S. Patent & Trademark Office published a patent application from Microsoft that relates to future deformable sensors that could be used in a wide variety of devices and other products such as fabric for clothing and furniture. As for the couch, the new sensors could be both friend and foe. On the good side the deformable sensors built into a future couch could be used to automatically turn your TV on when you sit on it or close it when there's no one left sitting on it. On the flip side, it could be set so that if you're sitting too long, it'll buzz or shake your cushion until you get up off the couch to stretch. The Apple Watch has an activity app that could notify a user to stand or just get off their butt if they're sitting for too long a period of time and now Microsoft wants our couch to get in our face. I wouldn't be surprised if the sensor will one day even freeze our current TV program and have Cortana step in to shout: "Get your fat a** off the couch and move! Maybe it'll use humor, who knows, but you get the point. Technically speaking Microsoft shows us patent FIG. 9 above that provides us with an example of an article in the form of a couch #902 including a deformable sensor #904 that may be incorporated into the exterior surface of a cushion of couch.

Specifically, patent "FIG. 9 illustrating a user applying strain to the couch, as detected by the sensor. By detecting that user is sitting on couch, various actions may be taken, including but not limited to automatically activating a display device (e.g., television) located in the environment or notifying user when he or she has sat for a threshold duration, order to encourage user to stand up."

Noteworthy is that Microsoft informs us that the deformable sensors may also be incorporated into other suitable devices or articles in the future such as car seats (e.g., in order to detect presence of a passenger in a seat), cribs, beds, and the like.

Microsoft also envisions their deformable sensors being built into future Surface tablets (and yes a smartphone is mentioned too), their HoloLens and other devices as noted below in patent figures 7A, 7B and 8. 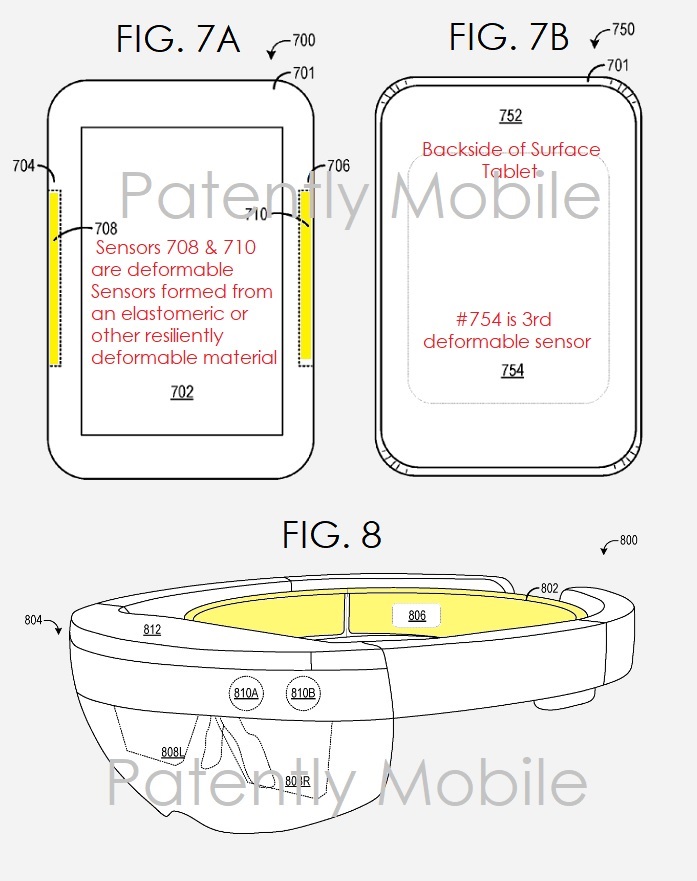 In respect to patent FIGS 7A and 7B, Microsoft states that in one non-limiting example, the first sensor #708 and second sensor #710 may be configured to detect touch/strain applied to the first side surface #704 and second side surface #706 in order to measure a grip applied to hand-held computing device #701 when the device is held by a user. In such an example, a grip pressure may be used for user interface interactions, e.g. to perform a selection operation in place of a mouse click or touch screen touch.

Third sensor #754 may be configured to detect touch input made to the back surface, for example. This may allow touch user inputs to be made (e.g. by controlling a cursor or other suitable user interface mechanism) without having to release a grip of the hand-held computing device to use a touch screen.

Apple is another tech company who has worked on this for added bezel touch controls and touch backside zones. 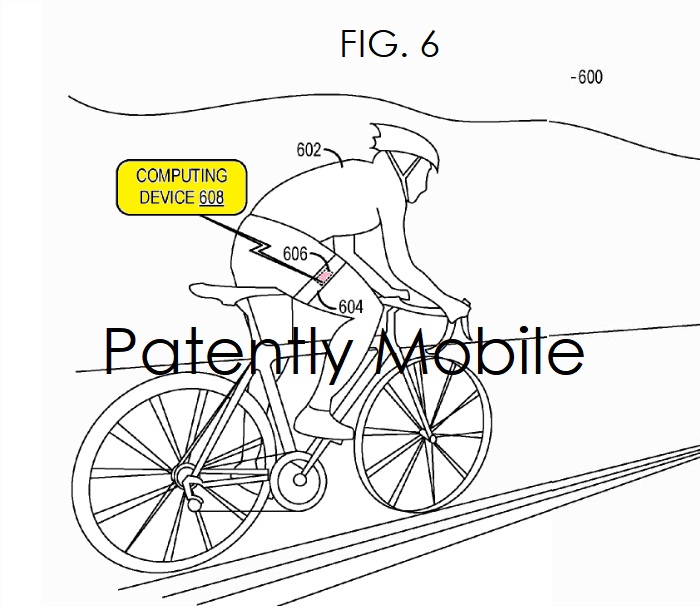 Lastly we present patent FIG. 6 above which illustrates an example of a wearable article in the form of a band #604 including a deformable sensor #606. The band is configured to be worn around a body part of a user, for example around a leg of the user. The deformable sensor may be configured to detect strain that may be induced by onset or recession of muscle swelling, muscle flexing, heartbeat, or other suitable body movement or function.

At a particular level of muscle swelling, the device could notify the user that their muscle is undergoing swelling so that user can terminate their activity to prevent further injury. Similarly, such a sensor also may be used to monitor an injured muscle for recovery, e.g. by detecting a reduction in swelling of the injured muscle.

The band may be formed from any suitable material, including but not limited to fabrics, flexible plastics, and elastomeric materials. The sensor may be configured to provide output to an operatively-coupled computing device #608 via a wired or wireless connection. The band may take the form of a thin, belt-like strap, or a larger, sleeve-like enclosure or worn as part of shirt, pant, shoe, hat or other suitable clothing article.

And one more thing: Microsoft notes that in some embodiments, the input subsystem may comprise or interface with selected sensors of sensor subsystem such as a natural user input (NUI) componentry. Example NUI componentry includes a sensor subsystem that may include a microphone for speech and/or voice recognition; an infrared, color, stereoscopic, and/or depth camera for machine vision and/or gesture recognition; a head tracker, eye tracker, accelerometer, and/or gyroscope for motion detection and/or intent recognition; as well as electric-field sensing componentry for assessing brain activity. The sensor subsystem could also include one or more deformable sensors as presented elsewhere in this report.