As Expected, Apple's CEO Sends out an Emotional Reaction to the End of DACA 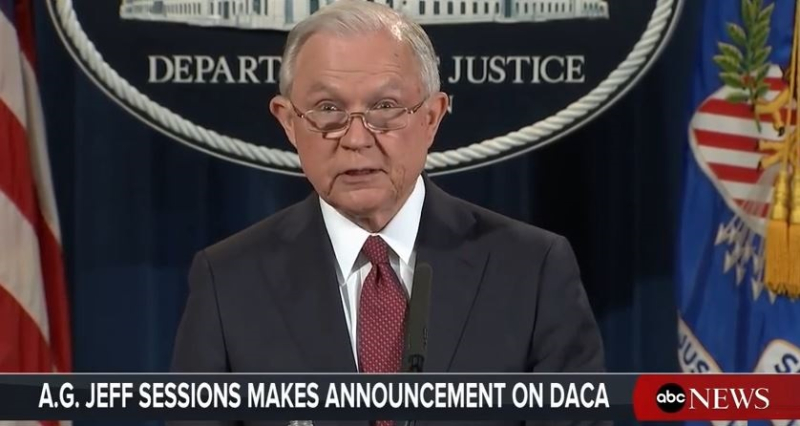 Earlier today Attorney General Jeff Sessions announced that the Trump Administration will end a program that deferred deportation of undocumented people brought to the U.S. as children.

"To have a lawful system of immigration that serves the national interest, we cannot admit everyone who would like to come here," he said at a press conference.

Sessions went on to state that "The DACA program was implemented in 2012 and essentially provided a legal status for recipients for a renewable two-year term, work authorization and other benefits, including participation in the social security program, to 800,000 mostly-adult illegal aliens.

This policy was implemented unilaterally to great controversy and legal concern after Congress rejected legislative proposals to extend similar benefits on numerous occasions to this same group of illegal aliens.

In other words, the executive branch, through DACA, deliberately sought to achieve what the legislative branch specifically refused to authorize on multiple occasions. Such an open-ended circumvention of immigration laws was an unconstitutional exercise of authority by the Executive Branch.

We inherited from our Founders—and have advanced—an unsurpassed legal heritage, which is the foundation of our freedom, safety, and prosperity.

As the Attorney General, it is my duty to ensure that the laws of the United States are enforced and that the Constitutional order is upheld."

On Sunday Patently Apple posted a report titled "Apple's CEO Revealed Sunday that 250 of their Employees have DACA Status."

"Earlier today, the Justice Department announced that President Trump will cancel the Deferred Action for Childhood Arrivals (DACA) program in six months if Congress does not act to make the program permanent."

"On behalf of the hundreds of employees at Apple whose futures are at stake; on behalf of their colleagues and on behalf of the millions more across America who believe, as we do, in the power of dreams, we issue an urgent plea for our leaders in Washington to protect the Dreamers so their futures can never be put at risk in this way again.

Despite this setback for our nation, I'm confident that American values will prevail and we will continue our tradition of welcoming immigrants from all nations. I'll do whatever I can to assure this outcome."

It's safe to say that his personal opinions on the matter, including the one where he said that the decision was a "setback" to the US, isn't shared by all.