In August Patently Apple posted a report titled "Samsung Remains the King of Smartphones for Q2 2017, based on the useless Volume Shipments Metric." But in China, Samsung didn't fare well at all.

According to a new report published by the Korea International Trade Association, Chinese customers owned 48 million Samsung cellphones as of end-June, making the company the sixth-largest player in the world's No. 2 economy. It was down two notches from its standing in the first quarter of last year.

In July Patently Apple posted a report titled "While Apple is Still Holding on to Fifth Spot in China, Samsung has fallen from Grace with a Paltry 3% Market Share."

The Trade Association's report called on Samsung to ramp up efforts to restore customer confidence in its cellphones. "Only 7.2 percent of Samsung phone owners repurchased Samsung products in the second quarter, far lower than 53.4 percent for iPhones and 25-26 percent for Oppo and Vivo. Samsung should regain customer confidence in its brand and establish a base of loyal customer again."

Where the report took a wild turn left is when the Korean International Trade Association claimed that Apple grabbed the top spot in China in Q2 2017 with 171 million handsets with Huawei in second spot with 132 million units; Oppo with 124 million units; Vivo with 108 million units and Xiaomi in fifth position with 68 million units sold. The information flies in the face of all other statistical data from the most known research firms. 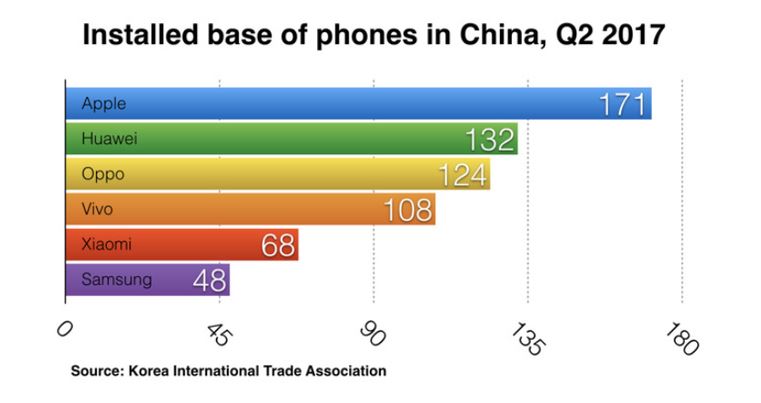 The news of these statistics were also repeated by Yonhap news today which is our second source. We were unable to find the KITA report on this subject to confirm the data first hand.