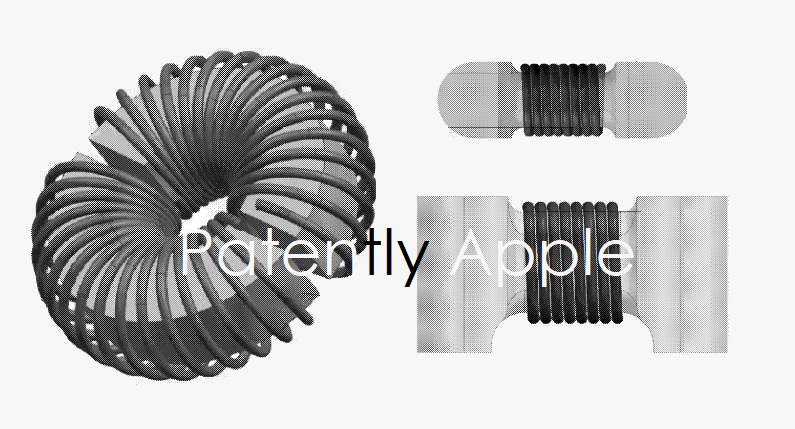 Accordingly, any simplification in the assembly process may noticeably reduce manufacturing costs. Further, a failure of the connector system may render an entire electronic device inoperable, so reliability may be important for maintaining customer satisfaction.

In that light, what is needed are connector assemblies that may be space efficient, have a high corrosion resistance, are difficult to damage, reduce or prevent moisture leakage into an electronic device housing the connector assembly, are readily assembled, and are reliable.

Apple's invention may provide connector assemblies that may be space efficient, have a high corrosion resistance, are difficult to damage, reduce or prevent moisture leakage into an electronic device housing the connector assembly, are readily assembled, and are reliable.

An illustrative embodiment of the present invention may provide a space efficient connector assembly by using inductive charging ports for transferring electrical energy from a first electric device to a second electronic device.

As compared to conventional connector inserts and connector receptacles, these inductive charging ports may have a smaller form factor and consume a reduced volume in an electronic device. This may allow the device to be smaller or to include an increased level of functionality, or combination of the two.

In these and other embodiments of the present invention, other types of connection detection apparatus may be used. For example, a proximity sensor, such as a Hall-effect sensor, may be placed on a connector assembly, while a magnet may be placed on a second, mating connector assembly. The electronic device with the proximity sensor may detect a change in magnetic flux indicating that the second connector assembly is coming into a mated position. As another example, the presence of a mating connector assembly may be detected by providing a stimulus to a connector assembly and then monitoring the result. For instance, a coil on an inductive charging port may be activated for a short burst. A 5 MHz or other frequency signal may be applied to the coil for a limited duration. Following the burst, the decay of the resulting signal may be monitored. If a second, mating inductive charging port is present, the transformer in the mating port may sustain the signal and the decay may take longer to reach a threshold level, while if no mating transformer is present, the signal may decay quicker and reach a threshold level in a shorter time. As another example, an optical detect may be used to detect mating, or attachment. A light-emitting diode (LED) in an electronic device may generate light, which may be reflected by a surface of a mating connector in a second device as the second device moves across the surface of the electronic device. The reflected light may be detected using a photodiode, which may generate a signal indicating that a connection has been made. The LED and photodiode may also be used for data communication when connectors of the first and second electronic devices are mated. As still another example, a user may provide an input via a user interface to the electronic device indicating that a connection has been made. Any combination of presence detection techniques may be used, and the first and second electronic devices may use the same technique or different techniques. 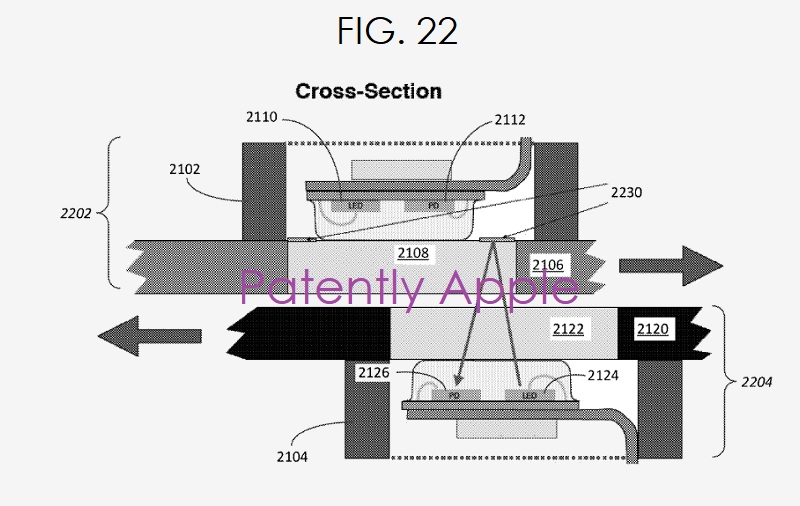 Apple's patent FIG. 48 illustrated below presents just is a single stage of an assembly process for a 60-GHz data port within a multi-stage process. 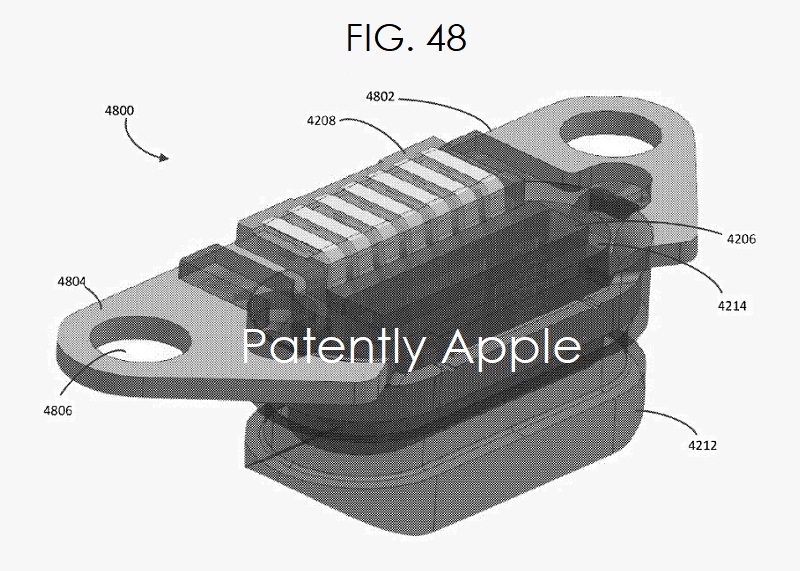 Apple's patent FIGS. 46-51, shows various stages of an assembly process for a data port of which FIG. 48 is just one. The overview of these patent figures show a simplified view of the transceiver chip #4206 which may be a packaged semiconductor device that incorporates antenna components to generate and detect RF signals as well as signal processing circuitry (amplifiers, digital-to-analog converters, analog-to-digital converters, encoders, decoders, modulators, demodulators, etc.). A back surface portion of the transceiver chip may have electrical contacts disposed thereon supply power to transceiver chip and to provide signal input and output paths for data communication and control signals.

Apple's patent application 20170250578 was filed back in Q1 2017. Apple provides well over 60 patent figures illustrating various parts of the device and in different iterations.

Our cover graphic illustrates patent figures 14B on the left and 13 on the right. FIG. 13 illustrates additional examples of transformer core shapes that may be used and 14B illustrates a semi-circular design which provides higher power transfer efficiency than one with a U shape design. Apple notes that in some embodiments space constraints or other design considerations may preclude the use of semicircular transformer cores. Some designs will work in future desktops or notebooks while others in future iDevices, wearables and accessories.

With Apple's iPhone X being the first iDevice to adopt inductive charging, it'll be interesting to see which methodology that they've initially chosen to go with. Considering that this is a patent application, the timing of this specific kind of inductive charging system coming to market is unknown at this time.

Posted by Jack Purcher on September 02, 2017 at 09:51 AM in 1A. Patent Applications, Wireless Charging, Wireless technology | Permalink | Comments (0)