It's been recently thought by market players that it would take at least another three years before Micro LED displays would be able to hit the market due to current technological bottlenecks. Yet that might be changing faster than many think. According to PlayNitride's CEO Charles Li, Micro LED production is not as difficult as originally expected. PlayNitride aims to start trial production of Micro LED in the second half of 2017, according to Li. Interesting to note that in the interview with Li, it was said that Apple's LuxVue owns a possibly important patent in producing micro-LED displays.

In May Patently Apple posted a report titled "Interest in Micro-LED Displays is Exploding as Test Runs are Reportedly Scheduled by Apple in 2017 and Others in 2018." The report presented the chart below that illustrates the trajectory of micro-LED over the next 8 years. 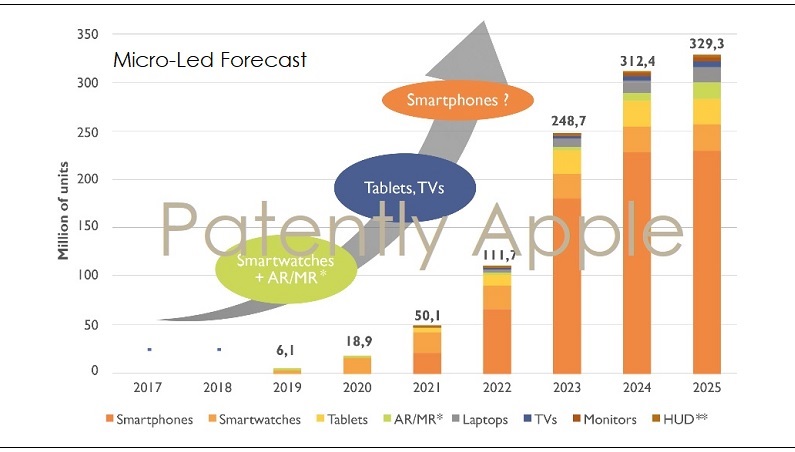 We further noted that PlayNitride could have products to market for 2019 for AR/VR headsets and beyond. The reason for following what PlayNitride is up to is because they're being targeted for an acquisition by Samsung. Though with their de facto leader Lee Jae-yong behind bars, they've publicly made it known that they can't currently make acquisitions without Lee's approval. It's a golden opportunity for Apple to grab this company like a thief in the night just to foil Samsung's early entry into another display technology beyond their stranglehold on AMOLED displays. But that's a story for another day.

It takes about 10 seconds to mass transfer 200,000 Micro LED chips in laboratory and based on the speed, it will take 10 minutes to produce a 5-inch Micro LED smartphone panel, Li indicated. The key factor affecting Micro LED panel production has shifted from how to break through the technological bottlenecks to how to decrease production cost.

At the moment, a Micro LED smartphone panel is estimated to cost about US$300, much higher than AMOLED's US$70-80 and LCD's US$15, therefore it is difficult to use Micro LED panels in smartphones for the time being.

For commercializing Micro LED technology, it is necessary to seek feasible application in terms of cost, such as smartwatches, automotive transparent displays and VR (virtual reality)/AR (augmented reality) devices."

Interestingly the report noted that "Micro LED chip sizes are about 1% of those of LED chips. Micro LED's structural arrays allow pixel pitches to be reduced to micrometer level, making it easily for Micro LED displays to reach resolutions over 1,500ppi, much higher than 400ppi for Retina LCD displays."

The report further noted that "For use as displays, Micro LED chips must be in mass transfer repeatedly. There are several technologies for such repeated mass transfer. US-based LuxVue Technology, which has been acquired by Apple, owns a technology patent for mass transfer based on static absorption."

While the exact patent name of number wasn't provided, Patently Apple listed the patents that Apple acquired from LuxVue back in 2014. Since that time we've covered a number of new patents that have come to light from the U.S. Patent Office (01, 02 and 03).

One of the other killer advantages to micro-LED that Venture Capitalist John Doer revealed in the video below between the 4:20 and 5:50 minute mark, is that micro-LED displays are 9X brighter yet uses much less power than required today. Doer mentions that 90% of the power associated with a smartphone is used to power the display.

LuxVue will provide Apple with not only the technological advantages of delivering displays that are almost 4X sharper and 9X brighter than current displays, they'll also be able to deliver these displays at incredible energy savings so that devices could stay connected longer. And the cherry on top is that LuxVue owns a key patent on how to actually make the displays at superior production rates than is known today.

While introducing it for the Apple Watch is where most analysts believe Apple will begin to slowly bring this type of display to market, it's really an Augmented Reality headset where the display could shine. Creating realistic augmented reality will definitely be enhanced using displays with resolutions at 1500ppi.

While these displays will be coming further down the road, it's good to hear from a leader in the field that confirms that the display technology is likely to roll out quicker than most are expecting. I think we all hope that's true for Apple.