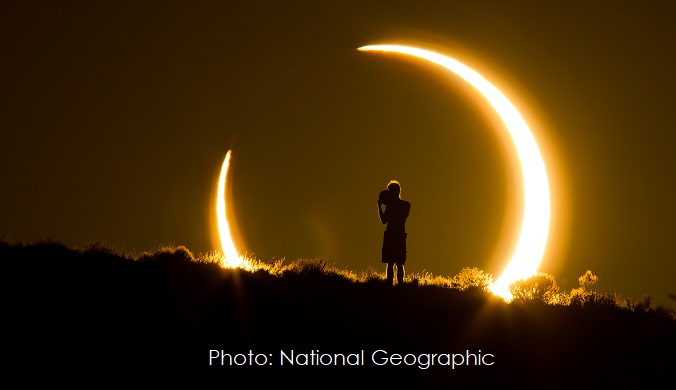 It's being reported today that POTUS is attacking the media for its "very unfair" coverage of Monday's solar eclipse, because "the sun was equally to blame for blocking the moon."

He went on to say that "The fake news is covering the eclipse from the sun's side instead of the moon's side, but if you look at it from the moon's side the sun is blocking the moon's side." He added that "There are so many sides you can't count all the sides."

Trump angrily tore into the sun itself, calling it a 'showboat' for its role in the solar eclipse. "The sun thinks the world revolves around it," Trump said. It's really "Sad."

There's nothing like a little humor to lighten up a situation that rightfully angered so many people last week. There's a little more to the satire report published by The New Yorker yesterday that you could check out here.

My hat is off to Andy Borowitz for trying to poke a stick in Trump's eye for being a little slow in directing the blame on the Neo Nazi group for coming out to a protest with sticks and helmets looking for trouble.

One of their members couldn't handle the clashes with the opposition and used his car as the ultimate weapon to injure and kill protesters opposing his views. It was despicable from any angle, from any perspective, it was raging hate plain and simple.

So I appreciate the humor from Borowitz who wanted to mock Trump's massive stumble. Of course days later President Trump made it crystal clear that he condemned racism in all it's forms including the KKK and neo-Nazis as reported by CNN and others.

Instead, Obama invited the group to the White House. Can you imagine if Trump would have done the same thing for the KKK? But the oh-so-honest press gave Obama a pass and the Democrats thought nothing of it. What a contrast. I wish that Borowitz would have used his humor wisely at that time to help us laugh at Obama. But it was nowhere to be found.

Though in the end I'll repeat that I deeply appreciate the New Yorker's attempt at using a little humor to end a tense filled week.

Due to the subject matter of this report, the comment section is closed.