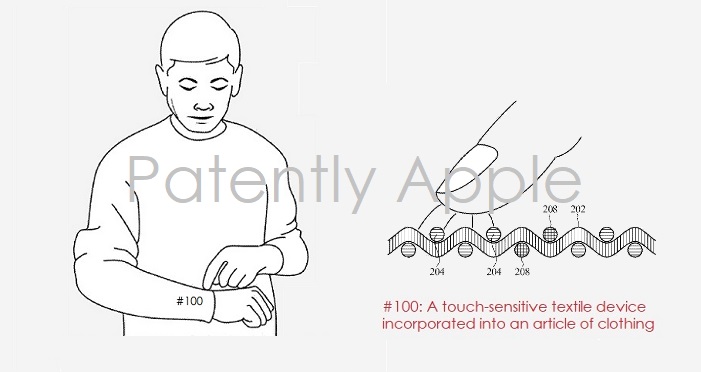 Apple has a few standing patent application in regards to using future smart fabrics for various devices such as a MacBook, Apple Watch band, iMacs, headphones, iPhone and beyond. Today the US Patent & Trademark Office published three new major smart fabric patent applications titled Fabric Sensing Device; 3D Fabric with Embedded Input-Output Devices; and Fabric with Embedded Electrical Components. As noted in our cover graphic, the main patent covers smart fabrics that could be used in next-gen wearables in the form of clothing, purses, bags, pockets and beyond. The fibers can incorporate a woven interface that may include touch-sensitive buttons to activate features of the product. Apple's 3D fabric extends smart fabrics to office furniture, sofas through to car seats, head mounted glasses and event TVs. The last patent covers an Apple TV-like device or Mac Mini having a body covered in a smart fabric that could incorporate smart buttons that are flat to the surface.

While this is something that's likely to be viable in five to ten years out, it's interesting to see the work being done by Apple's engineers today. And with three in-depth patents being filed during the same week in March of this year, it's clear that they have a dedicated team exploring this technology that could apply to future iDevices, wearables, accessories, car seats and a whole universe of products that these smart fabrics could apply to. 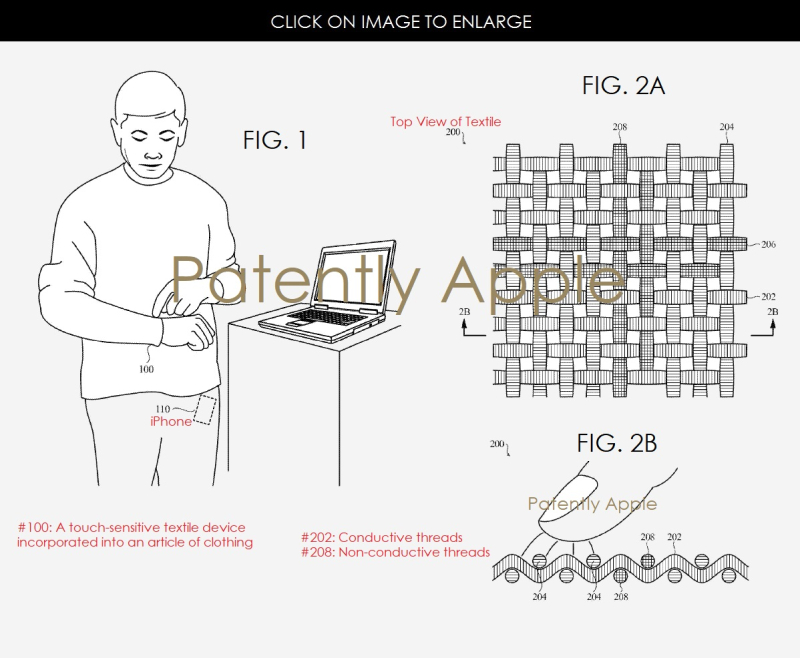 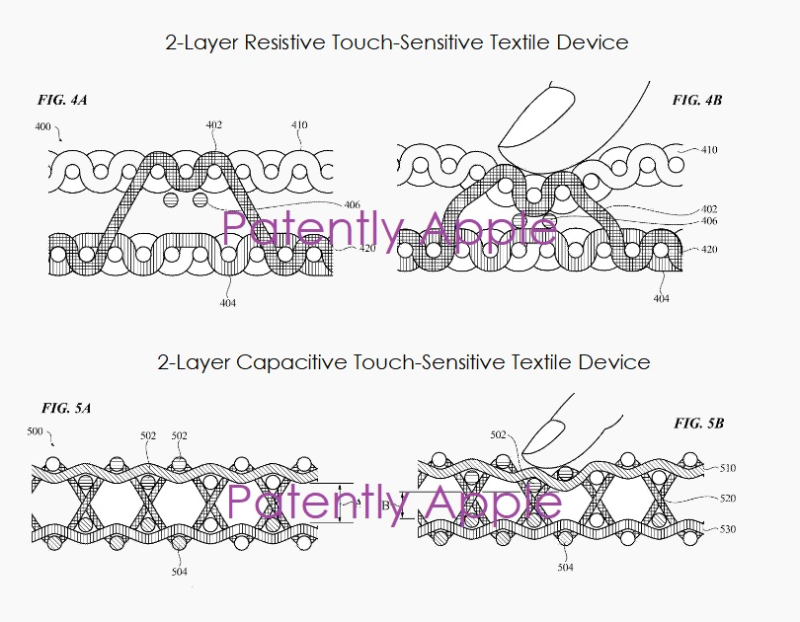 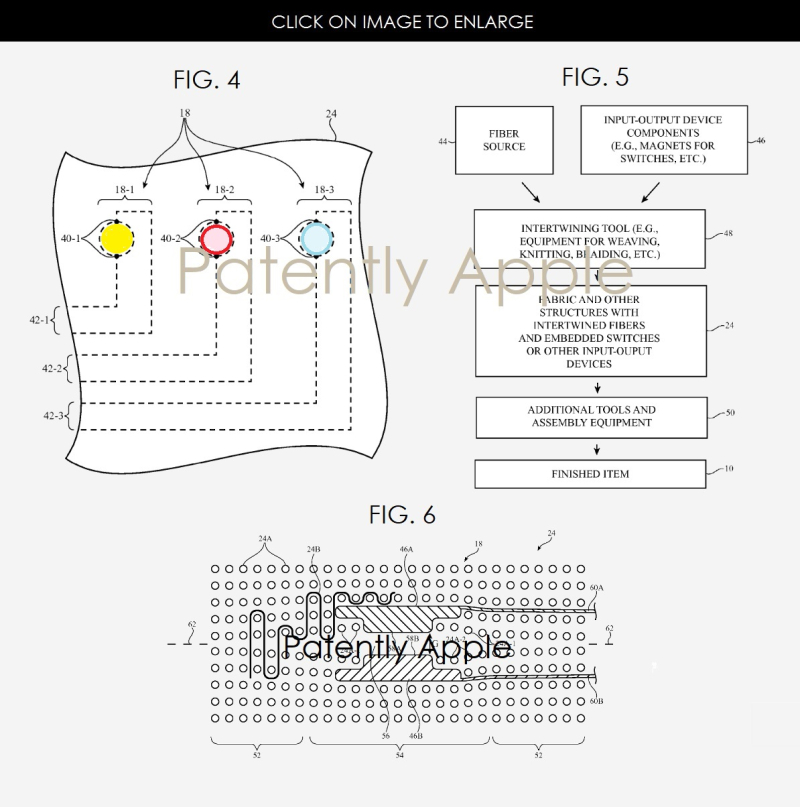 In patent FIG. 4 noted above we're able to see a top view of fabric #24 in a configuration in which three input-output devices (#18) have been incorporated into fabric. As an example, the input-output devices may be buttons that are open and closed in response to user button presses and/or switches that serve as sensors to determine whether force is being exerted on a portion of the fabric.

As shown in FIG. 5, the fabric that includes embedded components #46 for forming switches for buttons or force sensors and other input-output devices may be processed using additional tools and assembly equipment. For example, the fabric may be attached to housing structures formed from plastic, metal, glass, or other materials using adhesive, fasteners, or other attachment techniques, the fabric may be sewn, cut, and otherwise incorporated into fabric-based items, the fabric may be formed into structures with cavities that are filled with foam, circuitry, and other items, and the input-output devices, circuitry and/or other structures may be assembled with the fabric to form a finished fabric-based item or electronic device.

And lastly in patent FIG. 6 we're able to see a cross-sectional side view of an illustrative portion of a smart fabric into which components 46A and 46B have been incorporated to form an input-output device )#18. 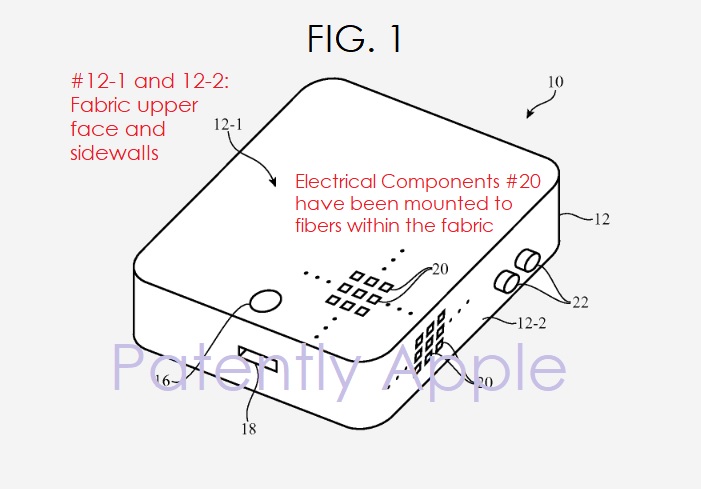 In the illustrative configuration of FIG. 1 noted above we're able to see a device (#10) like an Apple TV box that has portions formed from fabric such as upper face 12-1 and sidewalls 12-2. Electrical components #20 have been mounted to fibers within the fabric. Openings in the fabric may, if desired, be used to accommodate components such as buttons #22, button #16, and connector #18 or components such as components #16, #18, and #22 may be omitted.

Apple's patent claims put a lot of emphasis on the fabric comprising of woven weft and warp fibers.