IDC Reports on the Top PC Vendors in Europe and the Middle East for Q2, 2017 with Apple Shut Out IDC reports that in Europe, Middle East, and Africa (EMEA) traditional PC market (desktops, notebooks and workstations) continued to improve in the second quarter of 2017, with a stable performance. A total of 15.9 million units were shipped, according to IDC. Notebooks performed positively across EMEA (+3.1%) with a strong growth in Central and Eastern Europe (CEE) (+5.2%) and Middle East (MEA) (+11.1%) and showing a further stabilization in Western Europe (+0.4%). In the top PC vendor's list IDC shows that Apple didn't make the cut, with HP, Lenovo, Dell, Asus and Acer taking the top five positions. 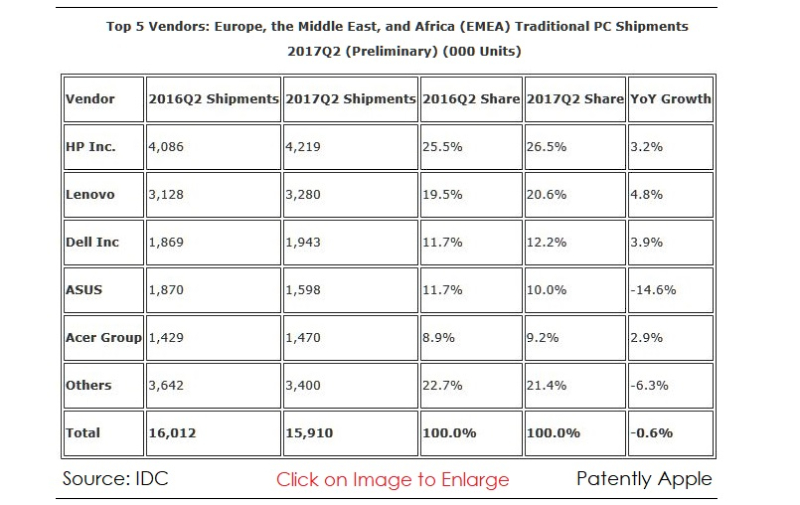 Traditional PC market consolidation is progressing, and the share of the top 3 vendors continued to grow in 2017Q2. The top 3 players accounted for 59.3% of the total market volume, with 56.7% in 2016Q2.

HP Inc. held onto the top spot, with 26.5% market share (up 1% YoY) and a growth rate of 3.2% YoY. Solid notebook results, in both the consumer and commercial markets, combined with stronger consumer desktops, boosted performance.

Lenovo ranked second, recording a market share of 20.6% (up 1.1% YoY) and growing at 4.8% YoY, led by the double-digit growth of commercial notebooks.

ASUS, despite securing fourth position with 10% market share, continued its struggle to return to positive growth territory (especially in CEE and WE), posting a YoY decline of -14.6%.

Acer Group maintained its growth trajectory for the third quarter in a row (2.9% YoY), strengthening its position (9.2% share) thanks to back to school shipments.