The U.S. Patent and Trademark Office officially published a series of 54 newly granted patents for Apple Inc. today. In this particular report we cover Apple's invention relating to the field of image capture, and more particularly, to acquiring images with a wide "field of view" (FOV) image sensor as they relate to taking superior 'Selfie' photos. The invention reveals that the sensor is smart enough to actually coax the user to hold the camera in a more optimal position. 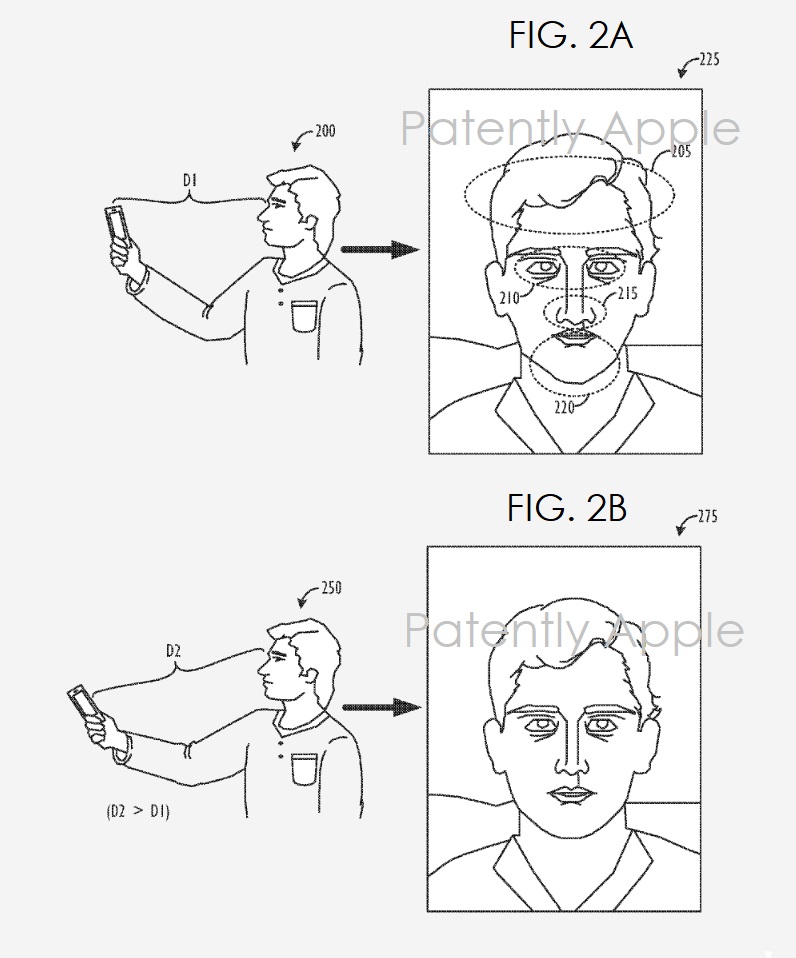 Apple notes that Traditionally, image sensors use a fixed field of view (FOV), whether the camera device is being held in "portrait" orientation or in "landscape" orientation. For camera devices with a relatively limited Field of View, e.g., a horizontal FOV of 57.degree. or less, this may result in sub-optimal "selfie" photo-taking conditions. For example, when attempting to compose a "group" selfie while holding the camera device in a "landscape" orientation, the FOV may not be sufficiently wide to capture all the members of the group, even when the camera device is being held by the user at a fully-extended arm's length (estimated at around 50 cm). Conversely, when attempting to compose a traditional, "self-only" selfie while holding the camera device in a "portrait" orientation, typically at a bent-arm's length (estimated at around 30 cm), the camera may be so close to the user's face that the resulting captured image has unwanted perspective distortions, such as exaggerated nose, cheek, and/or forehead sizes, as well as the gaze of the user appearing "cross-eyed." For a standard consumer electronic device camera with a wide angle lens (e.g., a "rear-facing" camera), taking a portrait image requires moving within roughly 30 cm of the subject's face, which could be uncomfortable for the subject and result in a distorted image. A standard camera with a normal lens (i.e., non-wide angle lens) may not have a wide enough field of view to capture typical scenes.

What Apple's invention covers is an improved camera comprising an image sensor designed to read out a 16:9 aspect ratio (or some other wide-angle aspect ratio), for example, 3840.times.2160 pixels. In such an exemplary device, a lens with a 79.degree. diagonal FOV would cover the full image sensor diagonal and could be used to produce wide angle landscape images. When the camera device is held in landscape orientation and/or a landscape photo is otherwise selected by the user or the system, the full, wide diagonal FOV may be displayed to the user on a preview screen of the camera device, and the landscape image may be captured in a wide, 16:9 aspect ratio.

When the camera device is held in portrait orientation and/or a portrait photo is selected by the user or the system, a 4:3 aspect ratio image (or some other non-wide-angle aspect ratio), e.g., using an effective 68.degree. diagonal FOV, may be displayed and captured. In this way, the user can hold the camera device in portrait orientation to take self-portraits or make personal video calls. If the user wants to include other people in the photo, include scenery in the photo, or make a video call with multiple people in view, he or she may hold the phone in landscape orientation, allowing the camera will configure itself appropriately and output the wider diagonal FOV, higher resolution and 16:9 aspect ratio image(s).

Apple further notes that if the camera device is detected to be in the portrait orientation, the camera may be configured to be optimized for a portrait or self-portrait image, e.g., using the reduced FOV techniques described above. In one exemplary embodiment, the FOV may be reduced to a 38.degree. or less horizontal FOV (simulating a 50 mm equivalent focal length) so that the user will move the camera device further away, in order to properly frame his or her face in the shot on the camera device's preview display screen.

As a result, lens distortion will be reduced, producing a more flattering and natural-looking image. In still other embodiments, the aspect ratio of the captured portrait orientation image may be cropped to a 4:3 aspect ratio, with the crop window shifted over the image sensor so that the user will be inclined to position the camera so that his or her eyes are closer to the lens plane, thus producing a more natural-looking gaze in the portrait or self-portrait image. In still other embodiments, the image data capture by the image sensor may be optically zoomed, cropped, scaled, and/or shifted before being displayed to the user on the camera device's preview display screen, so that the user will naturally be inclined to hold the camera device in a position that will produce an "optimal" portrait or self-portrait image, i.e., avoid as much as possible of the unwanted distortion and unnatural gazes that are typically produced by smaller FOV cameras. 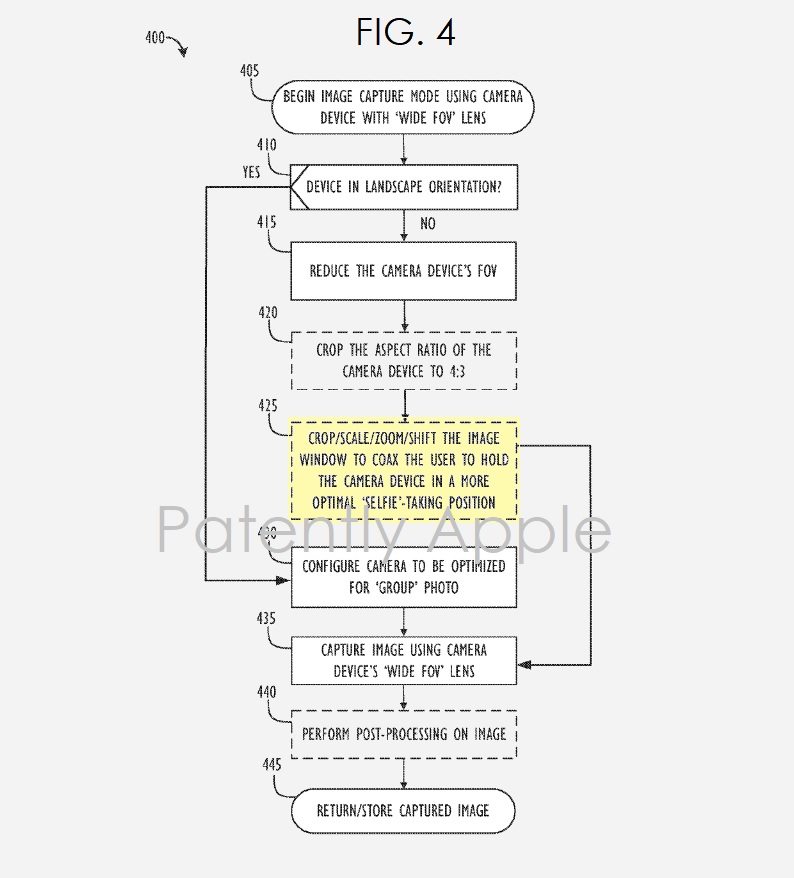 Apple's patent FIG. 4 noted above is a flowchart illustrating a method of capturing enhanced self-portrait images using a wide diagonal FOV camera. Apple interestingly adds to FIG. 4 that the "image capture device may apply one or more FOV effects, e.g., optically zooming, cropping, scaling, or shifting, the image captured by the image sensor in order to coax the user to hold the image capture device in a more optimal portrait-taking position (Step 425)." Whether Apple dropped this feature or is one yet to come is unknown at this time.

Apple's granted patent 9,712,751 was filed in January 2015 and published today by the US Patent and Trademark Office.