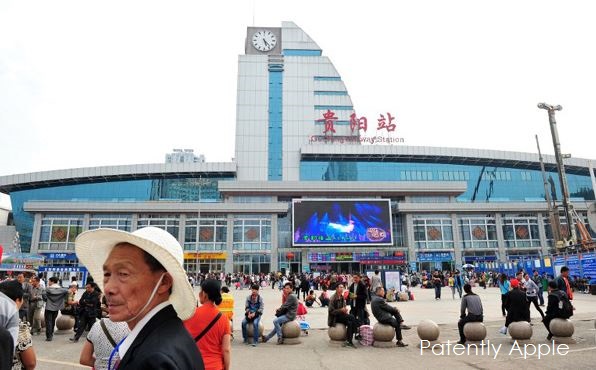 In November Patently Apple posted a report titled "Chinese Cyber Security Law goes into Effect in June 2017." Today we're learning that Apple is now setting up its first data center in China, in partnership with a local internet services company, to comply with tougher cyber-security laws introduced last month. The center will reside in the southern province of Guizhou with data management firm Guizhou-Cloud Big Data Industry. China launched its first big data pilot zone in Guizhou in May 2014.

An Apple spokesman in Shanghai told Reuters the center is part of a planned $1 billion investment into the province.

"The addition of this data center will allow us to improve the speed and reliability of our products and services while also complying with newly passed regulations," Apple said in a statement to Reuters.

"These regulations require cloud services be operated by Chinese companies so we're partnering with GCBD to offer iCloud," it said, referring to its online data storage service.

Apple is the first foreign firm to announce amendments to its data storage for China following the implementation of a new cyber-security law on June 1 that requires foreign firms to store data within the country.

In November Bloomberg reported that "China has green-lit a sweeping and controversial law that may grant Beijing unprecedented access to foreign companies' technology and hamstring their operations in the world's second-largest economy.

The requirement on certification could mean technology companies will be asked to provide source code, encryption or other critical intellectual property for review by security authorities. This is something Microsoft already does with its software, under controlled conditions."

With that in mind, Apple was quick to point out today that "No backdoors will be created into any of our systems." For more read the full Reuters report here.

On Monday Patently Apple reported that Apple announced it will setup its second Data Center in Denmark in the first half of 2019.