The U.S. Patent and Trademark Office officially published a series of 54 newly granted patents for Apple Inc. today. The particular granted patent covered in this report covers their invention that relates to a new laminar battery system that could provide a greater energy/battery weight or volume ratio for a better, longer lasting battery that may be able to recharge faster.

Batteries come in a range of different architectures and forms, including traditional rod-and-tube (dry cell) and flat plate (flooded cell) designs, as well as "jelly roll" configurations in which the anode and cathode layers are laid down on opposite sides of a flat sheet or flexible substrate and rolled up for insertion into the battery case or pouch. In flat battery designs, the rolled anode and cathode structure is folded into a low-profile casing or pouch, which is sealed along one or more sides.

Battery configurations for portable electronics and mobile devices require a range of design tradeoffs, including size, weight, power consumption, manufacturability, durability and thermal loading. In general, the amount of energy or storage capacity per battery weight (or volume) can also be an important factor, because a greater energy/battery weight or volume ratio makes for a better, longer lasting battery 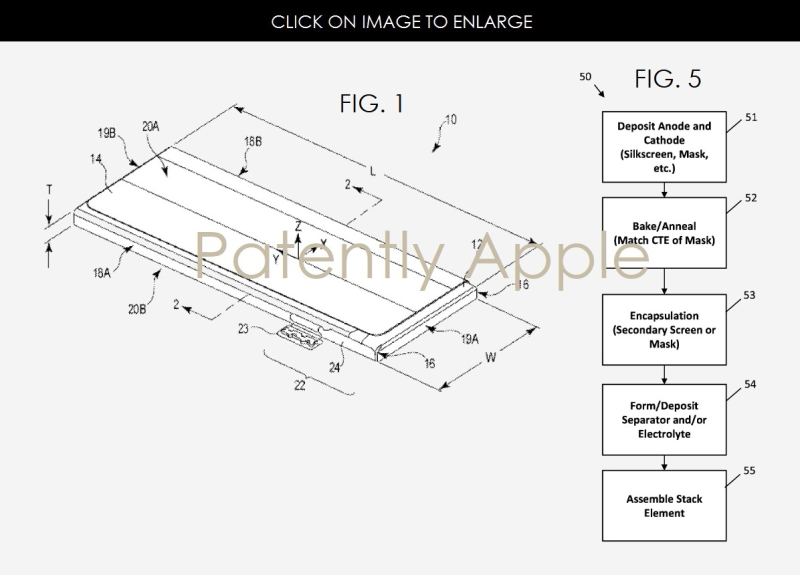 Apple's patent FIG. 1 is a perspective view of a battery with increased energy density and improved form factor.

Apple's granted patent 9,711,770 was originally filed in Q3 2013 and published today by the US Patent and Trademark Office. Although promising, it's unknown when Apple would decide to introduce such a battery system.

Apple's patent is a technical one that provides little insight beyond the generality that such a battery system could be more efficient. A 2007 report on laminar batteries explained that such batteries can be charged faster. At the time it wasn't able to power an iPod or laptop, but a decade later and the technology may be ready for prime time.

In 2010 another report on laminar batteries noted that they're better for electronic devices in respect to faster recharging speeds and running cooler. It's also a battery that could be used for electric vehicles and beyond.