While the State of VR Headsets is at a crawl today, the Market is set to Explode with Vitality later this Year

On Monday morning Apple is likely to show off their new Siri home device during their WWDC keynote. Amazon and Google got the leap on Apple and tomorrow we're likely to see Apple's version revealed. Another device segment that Apple is behind in at the moment, at least on paper, is VR headsets. Worldwide shipments of Augmented Reality (AR) and Virtual Reality (VR) headsets for Q1 2017 were dominated by Sony, Samsung, HTC, Facebook and TCL.  With Apple absent, are they in danger of losing this race? Of course not.

At present the volume of such devices is anemic and that's being polite. For all of Q1, the total units sold worldwide was 2.280 million. It's like another Apple TV hobby market. Not that it'll stay at those levels for long, but for now, Apple has time to set their headset roadmap right before launching such a device.

Apple keeps adding top level talent like Jeff Noris that lead the Mission Operations team at NASA that worked with various VR headsets. Other top level hires have been working on this project for some time now (one and two). Of course Apple could always join the me-too crowd by introducing a dumb screenless viewer iPhone accessory, but it would seem by the talent that they're bringing onboard this project, that Apple has their eye on the prize at the higher end of the market as any Apple shareholder would expect from Apple. There's no money in cheap screenless viewer devices.

The VR Market is set to Explode in Q4

With a long list of new products scheduled to ship in the second half of 2017, IDC is forecasting triple-digit growth for the full year.

Patently Mobile posted a detailed patent report earlier today regarding a Samsung patent application published by the U.S. Patent Office this week that shows us some of the newest ideas that Samsung is contemplating for a future headset. You could check out our full patent report here. The report also points to new headsets coming by HTC and Lenovo that will support a new technology called 'WorldSense.' The technology covers motion controlling game play and beyond.

In addition, we learned at Computex 2017, Microsoft announced that HP, Dell, Asus and Acer will be supporting Microsoft's Mixed Reality headset platform for Christmas and Microsoft introduced new headset hand controllers at that show. So as IDC reports, there's a long list of new VR headsets coming to market by year's end.

IDC's report further noted that "VR represented the vast majority (more than 98%) of headsets shipped during the first quarter. Within VR, about two-thirds of all headset shipments were screenless viewers, such as Samsung's Gear VR and Google's Daydream View.

Meanwhile, tethered VR headsets, such as the HTC Vive, Oculus Rift, and Sony's PSVR, accounted for one third of the market."

"The VR market is still very young and consumers seem to be taking a cautious approach," said Jitesh Ubrani senior research analyst for IDC's Mobile Device Trackers. "With plenty of headset options already in the market and even more coming soon, hardware isn't the issue. The bigger challenge is the slow growth in content that appeals to a mass audience, combined with the confusion associated with a lack of cross-platform support."

AR headsets saw year-over-year shipment growth of 77.4% as new products began shipping and existing headsets expanded distribution to additional countries. "It's very early days in terms of augmented reality headsets, with the vast majority of products shipping into the market focused on getting hardware into the hands of developers," said Tom Mainelli, vice president of Devices and AR/VR at IDC.

AR may Launch on Android and iPhone in Q4

Mainelli added in the report that "Meanwhile, we expect most consumers to experience their first taste of augmented reality through the cameras and screens of their existing mobile devices such as smartphones and tablets."

It's been rumored that Apple may introduce some form of Augmented Reality with their iPhone 8 or iPhone X. Whether it'll be a feature akin to Google's upcoming Google lens is unknown at this time. However, I think that it's highly likely that it could be as a follow-up to Apple's dual lens feature on the iPhone 7 Plus called portrait.

It's in the camera UI where Apple could add an AR button for photography that will not only take the photo but also add the names of buildings on a photo when on holidays or add information about a piece of art when visiting a museum.

This is where Apple could slowly introduce Augmented Reality into the mainstream before leaping to a full blown headset. Apple was recently granted a patent on this feature and Apple's acquisition of Metaio puts them in a great position to deliver top quality AR experiences on future iDevices. 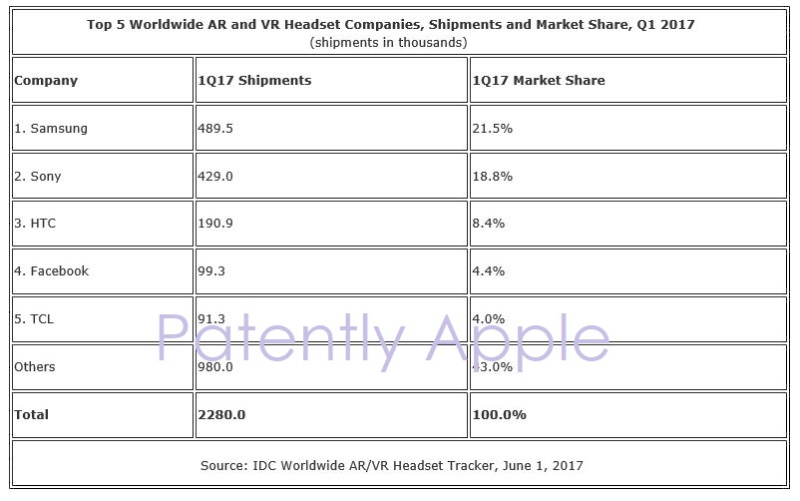 While Samsung shot for cheap volume shipments of screenless viewers to look like the market's leader, it's once again smoke and mirrors. Sony which is shown to be solidly in second position actually sells their headsets whereas Samsung had been giving away tons of their headset as seen here and here. Once again fake leadership from Samsung.

Cordless VR Headsets on the Way

During Intel's keynote on the first day of the show, Gregory M. Bryant, senior vice president and general manager of the Client Computing Group at Intel, announced that VR was going wireless, with Intel partnering with HTC to create a VR accessory that utilizes WiGig technology to allows HTC Vive customers to get quality VR experiences without the wires.

Canada-based 60GHz WiGig (IEEE 802.11ad) wireless IC solution developer Peraso Technologies has been cooperating with many VR hardware makers to develop WiGig wireless VR devices including head-mounted displays, as well as WiGig-enabled games consoles, gaming PCs and notebooks, and USB Dongles. Devices will launch at the end of the third quarter or the beginning of the fourth quarter of 2017, according to company sales vice president John Tryhub. You could check out Peraso here for their new WiGig solutions and network products here.

The excitement and buzz generated at Computex was like the Wild West Gold-rush. New standards, new chips, new technologies were abundant as the VR revolution is trying to find winning technologies to catapult this new sector to being a major device category.

Yet like the gaming industry of late, consumers are losing interest as new consoles come out that are expensive and there's only a handful of decent games each year, with more than 60% being repetitive sequels. When the gaming rental business was alive and well with Blockbuster still in the market, consumers were able to experiment with new kinds of games and different titles because for $9 a weekend, how can you go wrong? With video games going for $75 a pop and higher with no rentals of top games, I find myself playing two or three games a year at tops.

At the moment VR headsets don't have great content and it'll likely be expensive when it arrives. The good news is that VR headsets are going to cover a massive range of content over time from 360-degree films to advanced games, to exciting VR movies to the medical field, to architectural firms, to real-estate agents, to new cars, infinitum.

With the high-end talent that Apple has brought onboard and technologies that they've been acquiring over the years from companies like PrimeSense, we know that Apple is going to raise the bar when it comes to Augmented Reality as well as VR when they pull the trigger.

The current stats from IDC don't really reflect the activity behind the scenes in this emerging sector that will be massive when it finally arrives. And the dumbed down screenless viewers that dominate the market thus far will be in the dust bin of history with a year or two.

Tomorrow we're likely to hear about Apple's new Siri device and it's going to be exciting to see unfold. But for Apple fans, there's a lot more to look forward to as we know that Apple's headset project well underway if not close to completion.

In 2007 the iPhone burst onto the scene exciting the market and that was quickly followed by the iPad. Now the market is getting ready for the next decade with new devices relating to AI and Augmented/Mixed Reality on the way in the not-too-distant future. It's going to be a very exciting time ahead and we can't wait to see what Apple has in store for us, starting tomorrow.