Home Archives Contact Us Subscribe Twitter MeWe Facebook Patently Mobile
Video: Jim Cramer of Mad Money along with others on CNBC Hammered the Analyst for his Downgrade Call on Apple
Apple Wins a Patent for Touch ID Redesigned for iDevices with Larger Displays and No Home Button

In May Patently Apple covered the Google I/O event to keep on top of what Apple's competitor was up to. One of the interesting technologies that we covered dealt with Augmented Reality coming to Android smartphones this year with their new 'O' OS upgrade for this fall. The feature is called 'Google Lens.' Today`s report briefly covers the Google Lens patent.

I noted that Google Lens could be a huge hit. The feature is like a precursor to Augmented Reality. A user could take a photo and with one click get information about it. You could be in Chicago taking a photo of the tallest building and in one click you'll see 'Willis Tower' labeled on your photo. Or you could be in a museum taking a photo of a favorite work and in one click it'll reveal the artist and other relevant information. This is the same technology that Apple owns which was recently granted a patent for.

Google Lens could go one step further by allowing a user to take a photo of a poster of an upcoming event and in one click they would be able to access Ticketmaster for tickets or more details of the upcoming event.

This is something that may also be coming to Apple's iPhone 8, so on that note it was interesting to see unfold at the Google I/O event. Of course Apple's demonstration of the new Wingnut AR game for iOS showed the world that Apple was about 50 levels ahead of anything from Google or Microsoft or Facebook or Amazon etc. etc., etc.

Of course having a simple Augmented Reality feature like Google Lens for Apple's iPhone cameras this fall would be nice to have as well.

Earlier this month the Google Lens patent was published by the U.S. Patent Office titled "Smart Camera User Interface." Google's patent figures cover the Google Lens system and user interface examples of what a user could see when they take a photo of a poster announcing a coming concert. 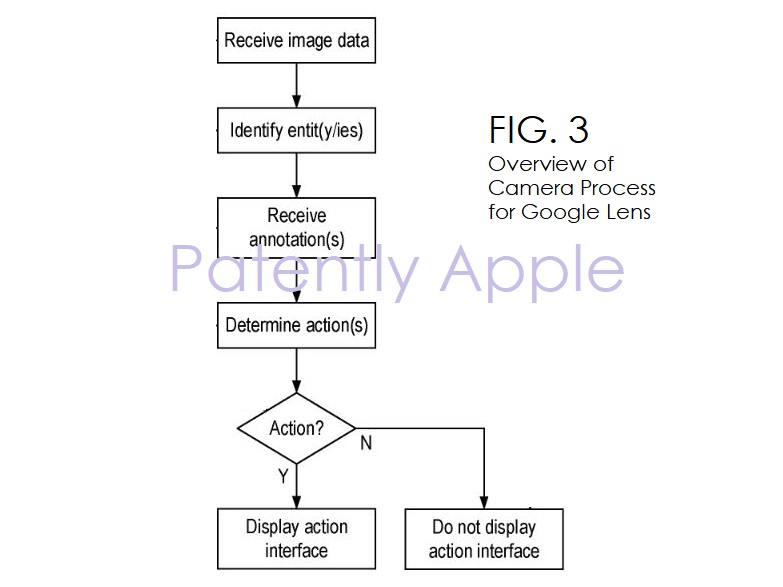 For those wanting to check out Google's patent for more details, click here.