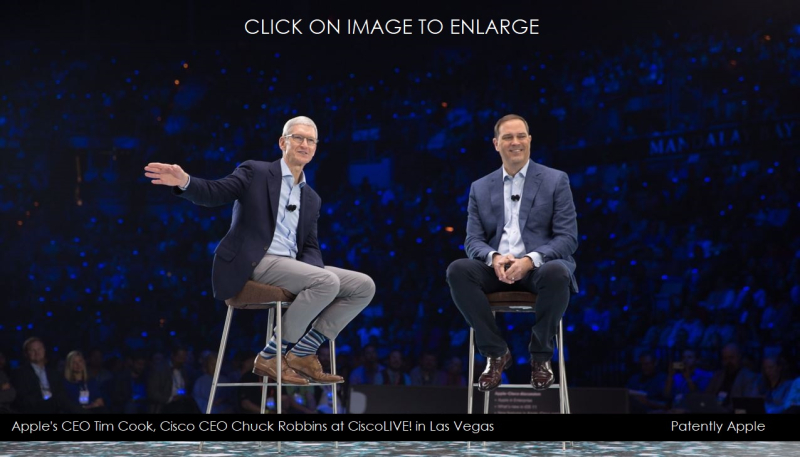 In August 2015 Patently Apple posted a report titled "Apple and Cisco Partnership Designed to Optimize Cisco Networks for iOS Devices and Apps." It was a major deal with Apple pushing further into the enterprise after striking a deal with IBM for MobileFirst a year earlier. Two weeks ago in an interview with Businessweek, Cook said that he thought the enterprise market is "like the mother of all opportunities. At one point in time you had to choose, 'Do you want to do consumer or enterprise?' But the reality today is a bit different: Enterprises are a collection of consumers." Today we're learning that Apple and Cisco are expanding on their partnership to help businesses that primarily use gear from both companies get a discount on cyber-security insurance premiums.

Reuters is reporting today that Cisco's CEO Chuck Robbins and Apple's CEO Tim Cook said at CiscoLIVE! in Las Vegas today that the combination of gear from the two companies was more secure than the use of competing technology, such as the Android mobile operating system made by Alphabet Inc's Google.

"The thinking we share here is that if your enterprise or company is using Cisco and Apple, the combination of these should make that (cyber-security) insurance cost significantly less," Cook said. "This is something we're going to spend some energy on. You should reap that benefit."

Cisco gave few details about the effort, saying in a company blog post the two companies were "collaborating with insurance industry heavyweights ... to offer more robust policies to our customers."

Cisco said it will create systems that allow for continuous security monitoring and for insurers to double-check that the systems are set up as intended.

Cisco, a networking company that has increasingly moved into cyber security in recent years, highlighted several other joint efforts with Apple. For more on this read the full Reuters report here.

Today Mr. Ulevitch wrote that "Every day I talk to companies who are looking for ways to use mobility to transform the way they do business. Hospitals are now replacing a nurse's clipboard with an iPad, manufacturers use custom apps on an iPhone to increase productivity, and sales reps are now given an iPad instead of a laptop. While this kind of revolution brings huge benefits — cost savings, better insight, and competitive advantages — it also introduces new requirements around network performance, collaboration between user groups, and security.

That's exactly why Apple and Cisco started partnering together — to create the very best app and voice experience for iPhone and iPad on corporate networks. Now, we're adding security to help our customers become the most connected, collaborative, and secure businesses in the world.

Cisco Security Connector App for iOS Devices in the Enterprise

Today I'm thrilled to share the latest innovation that we are currently developing: the Cisco Security Connector app for iPhone and iPad in the enterprise.

The Cisco Security Connector offers security functionality from Cisco Umbrella and Cisco Clarity in a single app. It can be deployed on enterprise supervised iOS devices via a mobile device management (MDM) solution, such as the Cisco Meraki Systems Manager.

With the Cisco Security Connector, organizations gain the following:

Visibility: Ensure compliance of mobile users and their enterprise-owned iOS devices during incident investigations by rapidly identifying what happened, whom it affected, and the risk exposure.

Control: Protect users of iOS devices from connecting to malicious sites on the internet, whether on the corporate network, public Wi-Fi, or cellular networks.

The Cisco Security Connector is expected in the fall of 2017. We will be starting a beta program shortly, so click here if you'd like to participate. And if you're at Cisco Live in Las Vegas, I'll be talking about this exciting announcement in my iTalk session on Tuesday June 27th at 3pm.

In addition, Cisco is embarking on a new journey in cyber insurance. We're collaborating with insurance industry heavyweights to lead the way in developing the architecture that enables cyber insurance providers to offer more robust policies to our customers. We will do this by enabling continuous security monitoring and a measurable reference architecture that includes technologies from Apple and Cisco.

This is just the beginning — stay tuned for more details in the coming months.