Home Archives Contact Us Subscribe Twitter Facebook Patently Mobile
Apple wins Design Patents for Siri Icons in China and EU Confirming that Siri will Work with Future Smart Glasses
While the State of VR Headsets is at a crawl today, the Market is set to Explode with Vitality later this Year 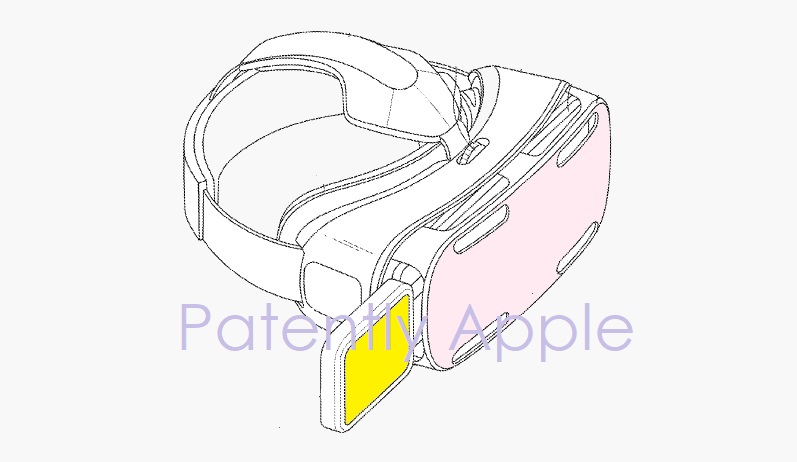 The first generation of Gear VR was for the most part a rudimentary accessory for Galaxy smartphones that provided their users with the ability to play games or dabble in VR-like applications using a closed environment through a headset. In order to attract more consumers to this new product category, Samsung's Gear VR has to provide potential customers with a much wider range of features and applications. This week the U.S. Patent & Trademark Office published a patent application from Samsung that reveals a future version of Gear VR that will deliver their first original set of features and new input accessories that will go a long way in helping to excite consumers to this new product class. Google is also about to update their VR headset as well.

Google's next version of Daydream will introduce a remote with an integrated touch pad to control onscreen activities and use head-tracking and head-motion for certain games and functions that they call 'WorldSense.' It will allow users move naturally in VR worlds. It's being developed with HTC VIVE and Lenovo. It's a next-gen standalone VR headset without needing to be tethered to a PC as noted in the video below.

Instead of introducing hand-held remote controllers like other headsets, Samsung set out to do something different by inventing a series of new input controllers for a wider range of applications. 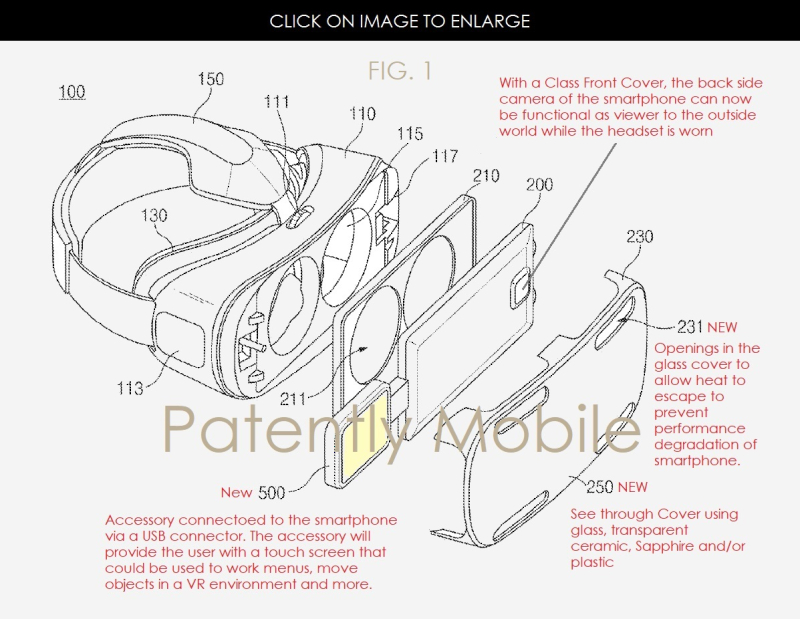 Samsung's patent FIG. 1 noted above is an exploded view of a next-generation version of Gear VR illustrating a new face cover made of a clear glass substrate that will allow the Galaxy smartphone's backside camera to take photos of the outside world, allow users to see their immediate environment and it could provide users a PIP view within the headset as noted further in the full Patently Mobile report.

In this abbreviated Patently Apple report I'll only point to the first new input accessory for Gear VR and illustrate how the new headset design will accommodate photo-taking with a drone.

One of three new Gear VR input accessories noted below can be seen connecting to a Galaxy Smartphone via a USB connector. The accessory is designed to provide users with hands-free touch screen input that will work with applications and gaming menus so as to choose options, move and/or interact with an item or object. 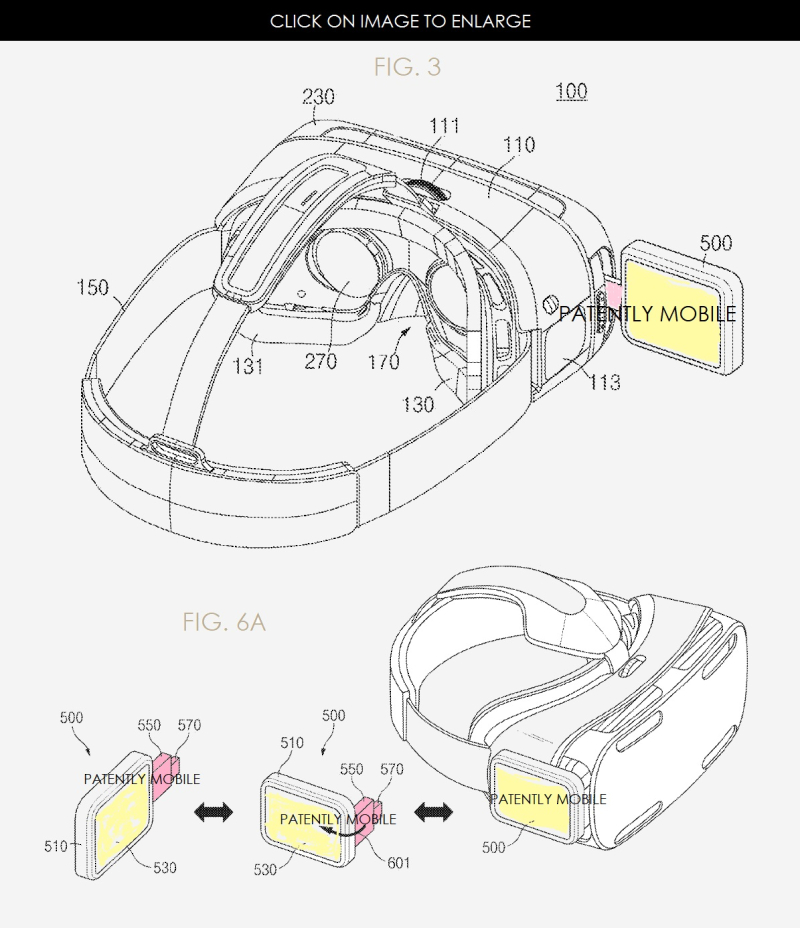 In patent FIG. 6 you can partially see that the touch pad can be turned or folded so that the accessory could be optionally accessed at a different angle.

As noted in patent FIGS. 13A and 13B noted below we're able to see how taking a panoramic photo of a scene could be done hands free by simply clicking on that option on a Galaxy smartphone using the trackpad or wheel key input accessory and simply moving one's head. With the face plate of Gear VR shifting to a clear glass plate, the user is free to take photos with a single finger on their input accessory. The user is also likely to take a steadier panoramic or regular shot by not having to hold their smartphone. Of course the trade-off is that you'll look like a total nerd taking photos that way, but that's life. 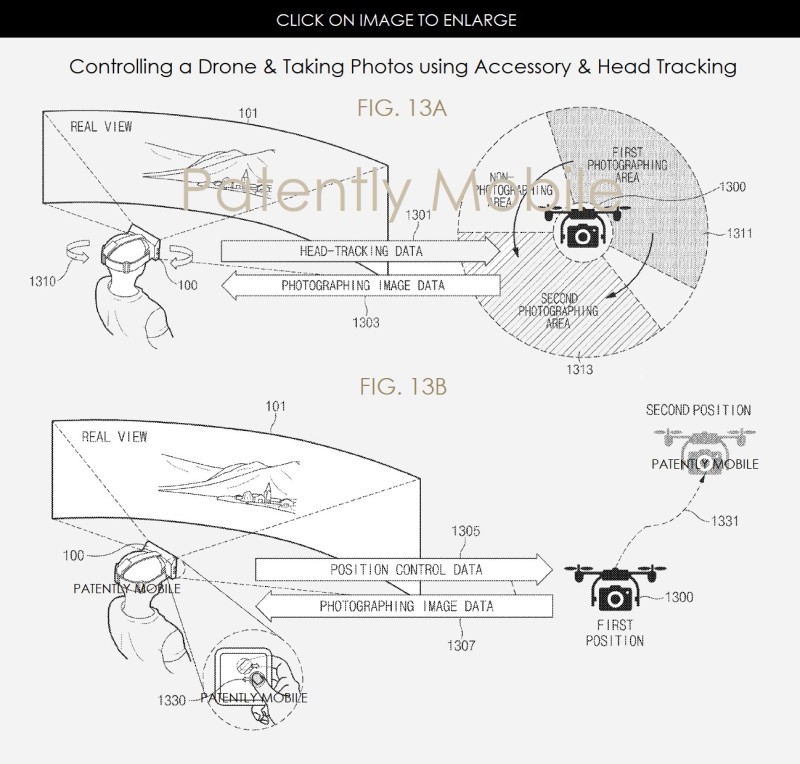 Samsung also illustrates in the patent figures above that Gear VR will be able to work with future drone devices that could be controlled through the headset and various new input accessories.

Yesterday Patently Apple posted a report titled "Apple wins Design Patents for Siri Icons in China and EU Confirming that Siri will Work with Future Smart Glasses" Apple's design patent and two utility patents published in 2017 have shown that Apple's headset will use Siri as a major method for controlling a future headset or smart glasses. Of course using a remote with a headset was first established by Apple back in 2010 and noted below in Apple's patent figure, so that will likely be a secondary input methodology.

You can tell that Apple is slowly preparing for smartglasses or a headset for Augmented and Virtual reality because even their updated Mac Pro trademark update coverage listed a connection to such a development by using key words and phrases such as "head mounted displays, headsets, augmented reality displays, goggles, controllers, 3D spectacles and smartglasses," in their international class 09 filing. 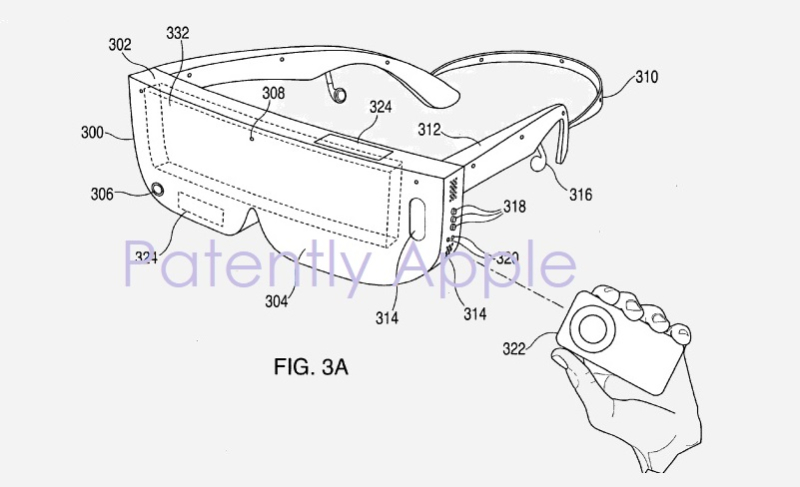 Apple isn't in a big rush to jump into smartglasses or a headset even though they have a dedicated team currently working on this project. The market is very young and nothing to date has excited the market to adopt this kind of device. Apple also wants to provide users with a top of the line user experience and user interface that will no doubt have to be somewhat reinvented for a headset. Apple is also known to introduce new apps with a new kind of device and so that takes time. A new report about the current state of VR is going to be posted later this afternoon, so stay tuned.