Video: Jim Cramer of Mad Money along with others on CNBC Hammered the Analyst for his Downgrade Call on Apple 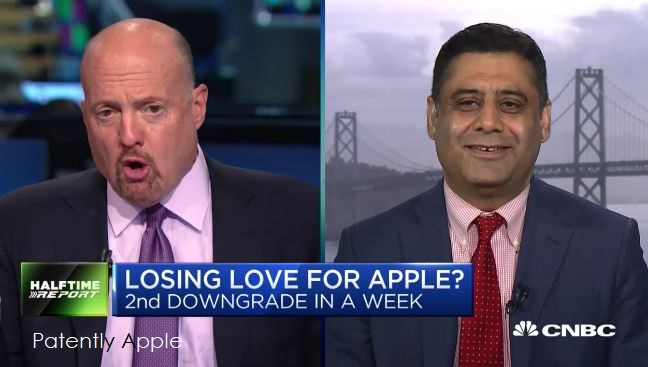 There's no doubt that Jim Cramer of Mad Money is an Apple Bull. He scored an exclusive with Apple's CEO Tim Cook on May 03. This bull went on the attack this afternoon by hammering Abhey Lamba, managing director, Americas research at Mizhuto on CNBC's Halftime Report segment as noted in the video below.

Crammer asked Lamba why he made the call he did against Apple on the weekend of all times. "I just want to know because it was the Tonys last night and this is a bit of, I think, a little showboat," the host of CNBC's 'Mad Money' said Monday. "You fired for maximum effect."

Abhey Lamba, managing director, Americas research at Mizuho, downgraded Apple to neutral from buy, based on the view that the stock's price already accounts for much of investor enthusiasm, and that further gains are limited. Lamba also lowered his price target to $150 from $160. Apple ended the day down 2.46% on NASDAQ.

Cramer and others hammered Lamba on many points in the Mizuho downgrade report. It's definitely worth watching as the CNBC team argue the recent Apple downgrades.