In February Patently Apple posted a report titled "Apple Supplier Announces 5nm Processors Scheduled for 2019-2020 Time Line." TSMC has 6,000 R&D staff working on the 5nm process at present. TSMC hopes to have 5nm chips in volume by 2020 or three years away. TSMC revealed in April that they'll be adopting extreme ultraviolet (EUV) lithography technology for higher performance and lower costs. TSMC noted that their 7nm and 5nm chips will give birth to new and innovative features for smartphones and headsets by advancing AR, VR, context-aware computation, AI and deep learning, areas that were touched on at Apple's WWDC keynote.

Yet there's one more thing that is special about 5nm processors. They could introduce new battery advances that could power smartphones for days. Last week Patently Apple posted a report about Flexible Fuel Cells under development. On Monday the IBM Alliance revealed that 5nm processors will introduce battery advantages that could also allow devices to go days without charging.

IBM stated that "In less than two years since developing a 7nm test node chip with 20 billion transistors, scientists have paved the way for 30 billion switches on a fingernail-sized chip. The resulting increase in performance will help accelerate cognitive computing, the Internet of Things (IoT), and other data-intensive applications delivered in the cloud. The power savings could also mean that the batteries in smartphones and other mobile products could last two to three times longer than today's devices, before needing to be charged. 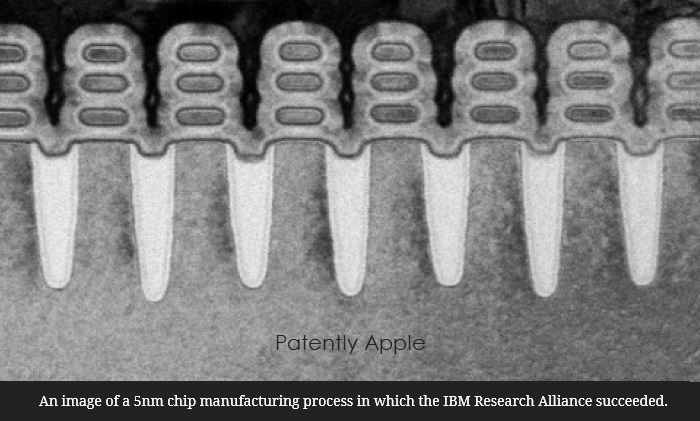 This same Extreme Ultraviolet (EUV) lithography approach used to produce the 7nm test node and its 20 billion transistors was applied to the nanosheet transistor architecture. Using EUV lithography, the width of the nanosheets can be adjusted continuously, all within a single manufacturing process or chip design. This adjustability permits the fine-tuning of performance and power for specific circuits – something not possible with today's FinFET transistor architecture production, which is limited by its current-carrying fin height. Therefore, while FinFET chips can scale to 5nm, simply reducing the amount of space between fins does not provide increased current flow for additional performance."

Considering that TSMC has already let it be known that they'll be adopting extreme ultraviolet (EUV) lithography technology in their 7nm processors, we can be assured that this process will likewise be used in their 5nm processors. Whether TSMC's technology will be able to equal the power savings that the IBM/Samsung/GlobalFoundries 5nm chips will is unknown at this time. However, TSMC is likely to have something similar to offer Apple for their 2020 iPhone or it could be an advantage too hard for Apple to pass on and switch back to Samsung. Just don't count TSMC out of the race yet. I fully expect TSMC will make some kind of formal statement to counter this announcement by the IBM Alliance within the year. Stay tuned.