Last week Patently Apple posted a report titled "Apple is working on a new Major Endeavor Related to Creating a Centralized Health Management System." The report noted that CNBC had been told of a secretive team within Apple's growing healthcare unit has been in talks with developers, hospitals and other industry groups about bringing clinical data, such as detailed lab results and allergy lists, to the iPhone, according to a half-dozen people familiar with the team. And from there, users could choose to share it with third parties, like hospitals and health developers. Today CNBC follows up with yet more news about this secret project.

CNBC reports tonight that Apple's "health team has been working with a tiny start-up called Health Gorilla, according to two people familiar with the initiative. Health Gorilla already has an app on the App Store. 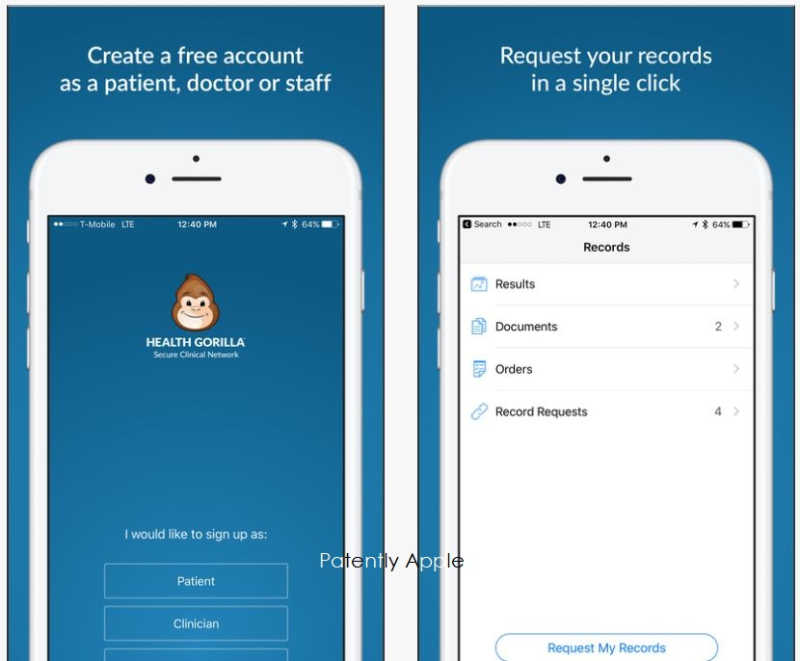 Sources told CNBC that Health Gorilla is specifically working with Apple to add diagnostic data to the iPhone, including blood work, by integrating with hospitals, lab-testing companies such as Quest and LabCorp and imaging centers.

CEO Steve Yaskin founded the company after a doctor friend of his was frustrated with the process of transferring patients' diagnostic test results in their practice, according to a blog post from Health Gorilla investor True Ventures.

It is primarily geared to physicians and serves as a marketplace for them to place orders and share medical records. But it also has a free offering for patients, which promises to gather up medical information in 10 minutes.

It's hard to believe that Apple will just "work with" Health Gorilla and not buy them out, but that's not in today's report. So it may be something that will come to the surface later this year. For more on this story click here.