Apple's CEO was in the news lately saying that the Apple Watch helped him lose 30 pounds. In an interview with Mad Money's Jim Cramer Cook stated: "You know, the Watch has been an incredible move into health, in the wellness and fitness piece." Today the US Patent & Trademark Office published a patent application from Apple titled "Measuring Respiration Rate with Multi-Band Plethysmography," that focuses on yet another future Apple Watch feature related to health.

A photoplethysmogram (PPG) signal may be obtained from a pulse oximeter, which employs a light emitter and a light sensor to measure the perfusion of blood to the skin of a user. However, the signal may be compromised by noise due to motion artifacts. That is, movement of the body of a user may cause the skin and vasculature to expand and contract, introducing noise to the signal.

Apple's invention and solution to the problem outlined above covers a photoplethysmogram (PPG) signal that may be obtained from a pulse oximeter, which employs a light emitter and a light sensor to measure the perfusion of blood to the skin of a user. To address the presence of motion artifacts, examples of the present invention can receive light information from two light sensors situated in a line parallel to the direction of the blood pulse wave. The light information from each sensor may include the same noise signal, and thus subtracting one from the other can result in a heart rate signal where the noise has been canceled out. In some examples, a signal from one of the light sensors may be multiplied by a scaling factor before cancellation to account for response differences in each light sensor. 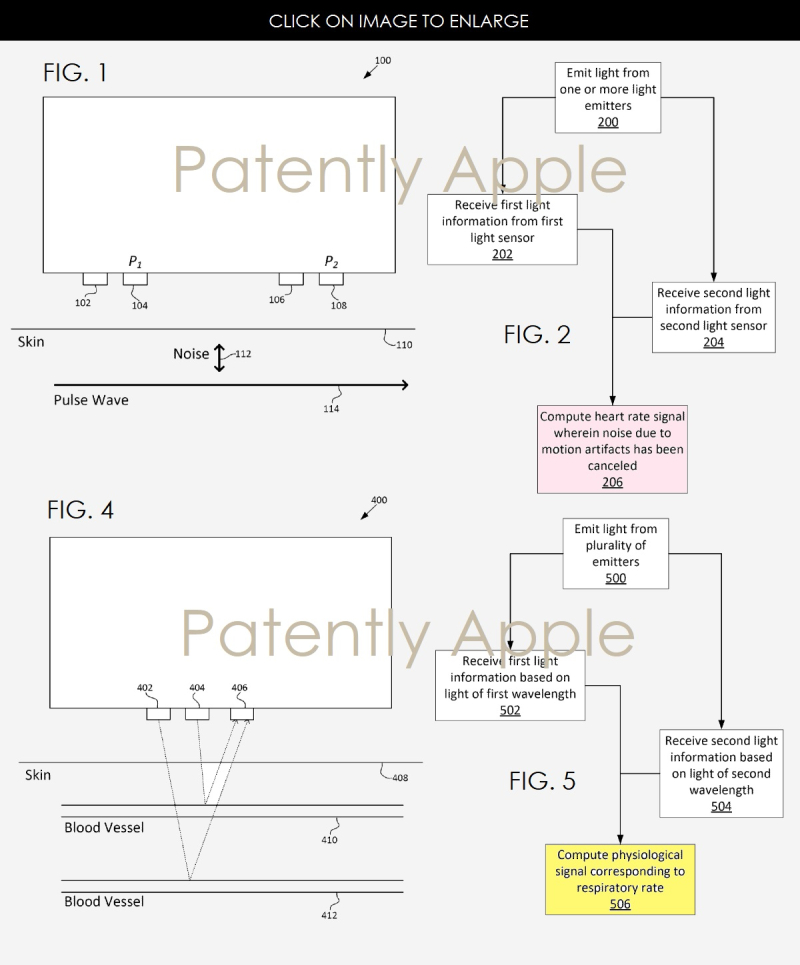 Apple notes that the electronic device #100 of FIG. 1 may be held in a user's hand or strapped to a user's wrist, among other possibilities.