Apple has begun a new War on Leakers telling Staff that When they Leak Information, they're letting Everyone Down 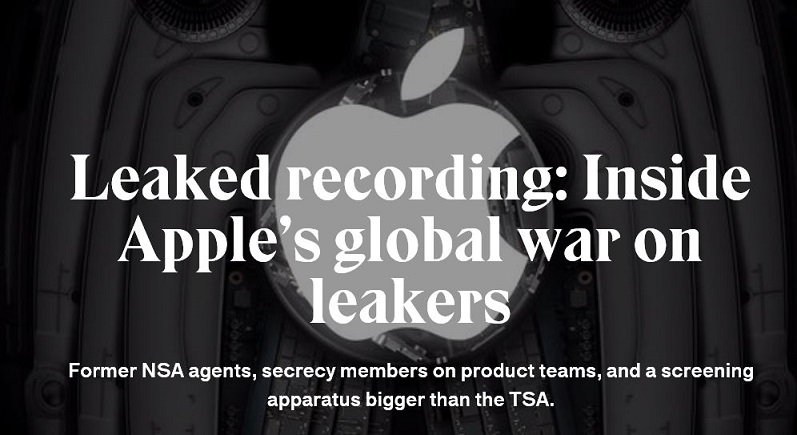 The very fans who love Apple are the ones hurting Apple in a major way by supporting the 'Leaker' players from overseas and from within Apple. Leaking information for profit, for fame and to influence today's untrustworthy mainstream media is out of control. For Apple, leakers are despised no matter if they're from overseas or internally at Apple. That of course has to extend to those who publish photos of leaked parts of coming Apple products.

The Outline, is a New York based digital news company focused on power, culture and the future. It was founded by Joshua Topolsky in 2016 who raised $5 million from several venture capitalists to start the company. Their new report posted today online is about Apple's war on leakers that stems from, you got it, a leaked recording of a meeting with Apple executives. Now how ironic is that to start things off with?

So okay, it's Apple wanting to get the news out to the Apple blogosphere to cool it with leaked photos that could kill any possible surprise at future events. It's also going to hurt Apple engineers who work hard on new products. The Apple teams want there to be an element of surprise when their baby project is born. They don't want their inventions to be met with a gigantic yawn. It's a real let down.

The Ouline reports today that "The briefing, titled "Stopping Leakers - Keeping Confidential at Apple," was led by Director of Global Security David Rice, Director of Worldwide Investigations Lee Freedman, and Jenny Hubbert, who works on the Global Security communications and training team.

According to the hour-long presentation, Apple's Global Security team employs an undisclosed number of investigators around the world to prevent information from reaching competitors, counterfeiters, and the press, as well as hunt down the source when leaks do occur. Some of these investigators have previously worked at U.S. intelligence agencies like the National Security Agency (NSA), law enforcement agencies like the FBI and the U.S. Secret Service, and in the U.S. military.

The briefing, which offers a revealing window into the company's obsession with secrecy, was the first of many Apple is planning to host for employees. In it, Rice and Freedman speak candidly about Apple's efforts to prevent leaks, discuss how previous leakers got caught, and take questions from the approximately 100 attendees.

The presentation starts and ends with videos, spliced with shots of Tim Cook presenting a new product at one of Apple's keynotes, that stress the primacy of secrecy at Apple. An employee states in the video that "When I see a leak in the press, for me, it's gut-wrenching. It really makes me sick to my stomach." Another employee adds, "When you leak this information, you're letting all of us down. It's our company, the reputation of the company, the hard work of the different teams that work on this stuff."

Greg Joswiak, Apple's Vice President of iPod, iPhone and iOS product marketing, says in one of the videos, "This has become a big deal for Tim. A matter of fact, it should be important to literally everybody at Apple that we can't tolerate this any longer." Later, Joswiak adds that "I have faith deep in my soul that if we hire smart people they're gonna think about this, they're gonna understand this, and ultimately they're gonna do the right thing, and that's to keep their mouth shut."

After the first video concludes, Jenny Hubbert addressed the room. "So you heard Tim say, 'We have one more thing.' So what is that one more thing?" she asks. "Surprise and delight. Surprise and delight when we announce a product to the world that hasn't leaked. It's incredibly impactful, in a really positive way. It's our DNA. It's our brand. But when leaks get out, that's even more impactful. It's a direct hit to all of us." Read The Outline's full report here for a lot more on this subject.

I can fully understand the complaints about photos of leaked parts being published because it definitely hurts an Apple keynote. Some years you wonder why they even have a keynote for new products because the vast majority of Apple fans have already been exposed to the leaked parts for months. So a new iPhone design has become a real yawner of late.

Yet Apple has to balance their criticism of bloggers so that they don't become like Hillary Clinton calling Trump supporters "deplorables." It's a negative that could backfire like a tsunami. Apple hates to admit that they need the Apple blogosphere to hype up their products and news that keeps fans loyal to their brand, that excites the market and brokers.

It's not just about the products, it's also about the people, stupid. And if Apple wants their fans to stay engaged in all-things-Apple, I'd be applauding the bloggers for the work that they do, not admonish them through silly back door leaked audio recordings about it's war on leakers. If there was only about 100 attendees at their meeting, then one of the rats is amongst their own ranks. I'd look their first, Tim