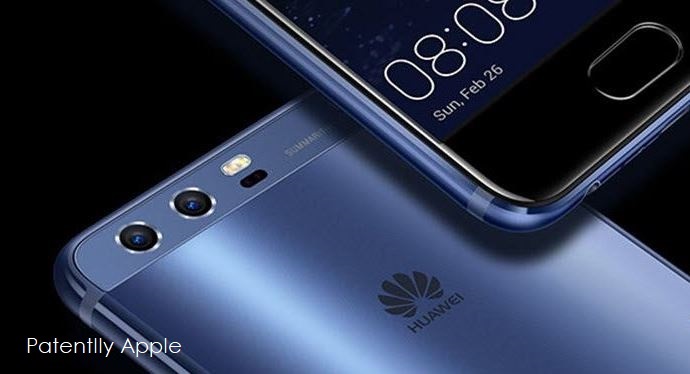 On April 28 Patently Apple posted a report titled "Smartphone data for Q1 2017 shows that the big Story is the Stunning growth from Oppo, Huawei and Vivo." The report covered TrendForce's smartphone shipment statistics globally. One of IDC's latest reports covers new smartphone statistics in China for Q1 2017. Apple's iPhone remains in fourth spot barely beating out Xiaomi, confirming the report by Canalys that we covered in late April. 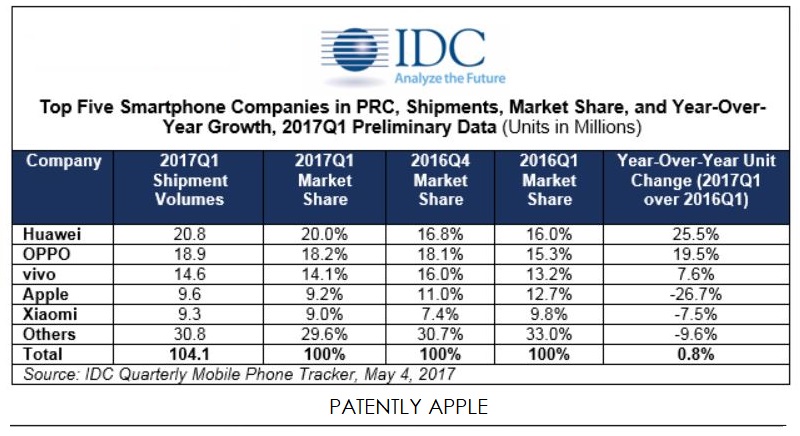 I noted in a report titled "Samsung Tops Smartphone Shipments Chart in Q1 due to Flooding the Market with Massive Low-End Model Shipments," that Apple only sells premium smartphone and that Samsung flooding the market with phones in the $185-$240 range, a category Apple doesn't participate in.

We furtther noted that TrendForce noted that "Samsung's sales results for its high-end smartphones fell short of expectations in the first quarter as consumers' confidence in the brand had yet to fully recover from the recall of Galaxy Note 7."

In a recent report by Counterpoint Research, Research Director, Neil Shah noted that "Apple's share of this super-premium segment remains at 80%, with five out of the top ten model SKUs belonging to Apple." Their graphic below spells that out clearly. 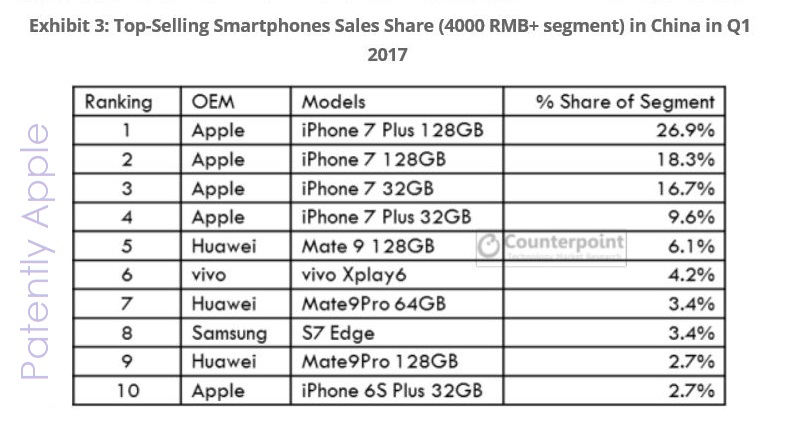 This is why Apple has taken 92% of the smartphone industry's profits in seven straight quarters. They don't participate in smartphones under $400.

In IDC's latest report they claim that 104.1 million smartphones were shipped to China in 2017Q1. This was a mere 1% year-on-year (YoY) growth, in part the result of high inventory from the previous quarter. 2017Q1 was also relatively quiet aside from a few product launches like Huawei's new P10, P10 Plus, and Honor V9. This, along with strong momentum for the Honor brand, helped Huawei reclaim the top position from OPPO.

"Apple has been seeing double-digit YoY declines for the fifth quarter in a row, but we believe that Chinese consumers are holding out for the launch of Apple's 10-year anniversary iPhone at the end of the year, and this will help Apple to see a rebound in the China smartphone market." .The top five smartphone companies now dominate 70% of the market.

IDC noted that Oppo's R9 sold well this quarter, a phone that sells for roughly US$489 as did the Huawei Honor 8 selling for US$400. This is where Apple's only weakness is. While they don't, won't and shouldn't sell smartphones in the under $400 range as all Chinese vendors do to artificially beef up their "shipment stats," the fact is that Apple's iPhone SE is in a battle zone where they're not competitive based on what the Chinese consumer feels is value. These consumers want a 5 or 5.5" display and Apple only offers a 4" model.

When trying to figure out why Apple didn't hit their iPhone sales number for the quarter and why they were down in China, Apple's CEO seemed to be in denial this week about their Chinese competitors. The stats and commentary from IDC clearly shows that smartphones in the sweet spot ($400-$500) range, Apple's iPhone SE failed to register any significant sales.

Apple is always in a battle with shiipment of cheaper products and when there is deeper analysis, the volume game only helps losers that rely on price alone. Apple fans love to cheer when Apple is in first place like they are currently in tablets and smartwatches, but the minute that they're knocked out of the top spot, they change the argument to other factors. That's understandable and we report on those differences ourselves when volume alone is the deciding factor.

However, while Apple is the profit king and are the clear winners at the top end of the Chinese market with premium smartphones, they do in fact compete in the sweet spot of the market in China at the $400 to $500 price range and here the iPhone SE is a clear loser.

Apple's CEO did let it slip during his interview with Jim Cramer (and not during Apple's financial conference) this week, that certain iPhone models weren't selling as well and that they would take a closer look at that. That's what he should have said during Apple's conference call because as we pointed out in our report this week titled "Apple's CEO seems to be in Denial about their Chinese Smartphone Competitors Outsmarting them," Cook kept changing the reasons for why the iPhone missed it's mark by pointing to iPhone 8 rumors, tourism down in Hong Kong and currency factors.

Apple is a profit machine because they make products consumers want. They're the best at it in the world hands down. But the Chinese consumer in the $400-$500 range see things differently because they don't make as much money as U.S., Canadian and European consumers. And in that important slot, Apple's iPhone SE is a failure that Apple has to adress at some point in time. For more on the IDC report, click here.