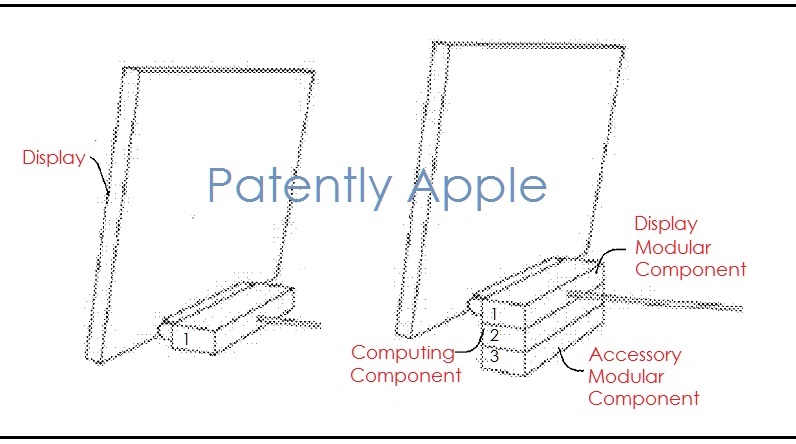 Back in February 2016 our Patently Mobile blog posted a report titled "Microsoft Patent Clearly shows that a Modular Desktop PC to take on Apple's iMac is on the Drawing Board." That was followed-up by a another report on this development in July 2016. Then in late October Microsoft actually launched this modular desktop under the branding 'Surface Studio' and the PC press fell in love with it immediately. In our follow-up report titled "The Battle between Microsoft and Apple Events focused on the Pro Market Sets Off a Firestorm" we recorded the media ripping into Apple while drooling over Microsoft. The MIT Technology posted a report titled "Microsoft is looking like the New Apple."

Microsoft's original patent regarding this new PC clearly described it as a modular design, as our cover graphic illustrates. The design will allow pro users to add more functionality, high-end GPU's and much more. In October Microsoft only released the base unit, obviously leaving this year to introduce part two of their roadmap with a series of modules to expand the Surface Studio. Now Apple wants to reinvent the Mac Pro with, yes, a new modular design.

Apple rushed to have a meeting with a very select few in the media to get the news out about their grand new idea. With the Mac Pro market angry with Apple for shear neglect and a MacBook Pro that many complained wasn't pro minded, Apple's meager upgrade to the Mac Pro tower launching later today was bound to reignite the anger in the pro community. Hence the rushed meeting to squash the negative press they knew would hit the fan today. The timing of this meeting is not coincidental. John Gruber was one of those present at Apple's meeting and this is what he wrote today in part:

"Apple is currently hard at work on a 'completely rethought' Mac Pro, with a modular design that can accommodate high-end CPUs and big honking hot-running GPUs, and which should make it easier for Apple to update with new components on a regular basis. They're also working on Apple-branded pro displays to go with them. Unfortunately these next-gen Mac Pros and pro displays "will not ship this year." In the meantime, Apple is today releasing meager speed-bump updates to the existing Mac Pros.'

Phil Schiller: "With regards to the Mac Pro, we are in the process of what we call 'completely rethinking the Mac Pro.' We're working on it. We have a team working hard on it right now, and we want to architect it so that we can keep it fresh with regular improvements, and we're committed to making it our highest-end, high-throughput desktop system, designed for our demanding pro customers.

As part of doing a new Mac Pro — it is, by definition, a modular system — we will be doing a pro display as well. Now you won't see any of those products this year; we're in the process of that. We think it's really important to create something great for our pro customers who want a Mac Pro modular system, and that'll take longer than this year to do.

The CPUs, we're moving them down the line. The GPUs, down the line, to get more performance per dollar for customers who DO need to continue to buy them on the interim until we get to a newly architected system."

Another point made in the report was that "Apple has 'great' new iMacs in the pipeline, slated for release "this year," including configurations specifically targeted at large segments of the pro market. For a lot more detail, see the Daring Fireball report here.

Whether the all-new 'modular' Mac Pro design will be a tower like unit, a tube or stackable unit with circular or square components is unknown at this time. But there's no doubt that the new modular designs from both Microsoft and HP had turned a light on at Apple. Of course they'll never admit to that. There has been no patents about a modular Mac of any kind so this appears to be a sudden change in direction that requires more time to develop for next year.

In the short term, I think that the Surface team at Microsoft might be smiling today. They believe that Apple rushed to copy the Surface tablet with a soft cover keyboard and digital pen for the iPad Pro and now Apple is designing a 'modular' desktop computer after the Surface Studio modular desktop debuted in October. After Microsoft debuted their HoloLens, rumors began of Apple having an advanced team working on a new headset.

Although Apple had been working on a lot of these projects years ahead of Microsoft, as far as Joe-public is concerned, it's Microsoft who is bringing new things to market before Apple. It's Microsoft that is now an innovator in hardware. And as they say, perception is 99% reality.

If you're in the Pro community, then today's news of an all-new Mac Pro is bound to cheer you up. On the surface it looks like Apple  is going to get very serious about the Pro market again.

Yet something this important should have been presented at their WWDC event or in an exclusive interview with Time or other world magazine with a great mysterious tone to it so as to build excitement. A rushed meeting prior to the launch of a Mac Pro update unfortunately looks desperate and so-last-minute thinking that it looks like amateur hour; something that we would have expected from the Amelio era. It seems like a step backward for Apple. Let's hope that the new 2018 Mac Pro design will make up for this media misstep.