End of an Era: The Intel Developer Forum (IDF) is Officially Dead 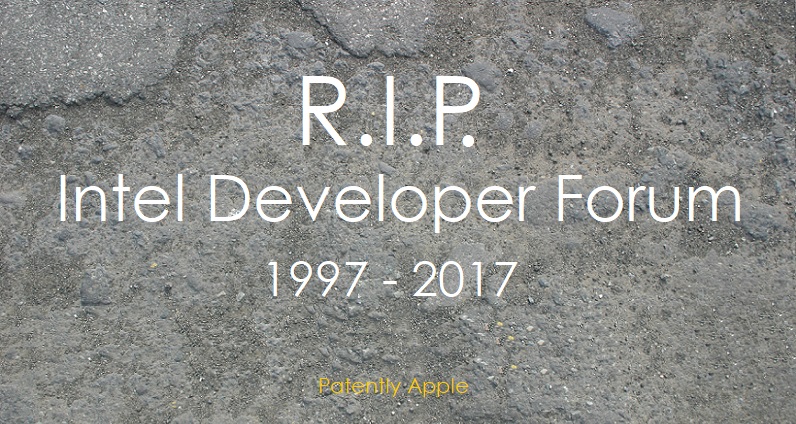 Intel has officially announced the end of their IDF events that covered PC developments that were in the works at Intel. It was an event I rarely ever missed; though admittedly, the IDF events did seem to be a little lost over the last few years and I had stopped covering the event for a lack of real news. In January Patently Apple killed off the "Intel Events" category from our side bar. And yet, it still seems like a loss to officially hear Intel's announcement today. Just as PC's were about to be revived with Apple's modular Mac and Microsoft's new Surface Studio, the company at the epicenter of the PC revolution is admitting that it's no longer a priority.

Intel's announcement states that "Intel has evolved its event portfolio and decided to retire the IDF program moving forward. Thank you for nearly 20 great years with the Intel Developer Forum! Intel has a number of resources available on intel.com, including a Resource and Design Center with documentation, software, and tools for designers, engineers, and developers. As always, our customers, partners, and developers should reach out to their Intel representative with questions."

Intel's IDF event that was scheduled for August 15-17 at the Moscone center is now cancelled.

Intel's product focus is moving toward Artificial Intelligence, Smart vehicles, Optane products, the Internet of Things (IoT), communications and so forth. New forms of events will be created and hopefully there will be at least one PC oriented event in the mix. But for now, Intel wants to drop the IDF events so that they can reinvent a new image for the company with emphasis beyond PCs.