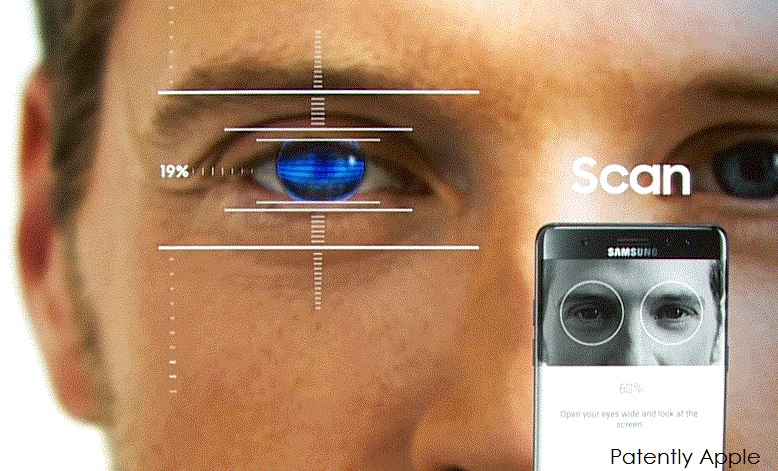 Last August Patently Apple posted a report titled "Samsung Patents for an Iris Scanner come to Life in the new Galaxy Note 7." Samsung was touting that their new dual biometric ID security was better than just fingerprints – a dig at Apple's Touch ID. But the Note 7 was a complete disaster and Samsung was humiliated in having to remove the product from market. So the Iris scanner had no impact on the market. Now even Samsung recognizes that Iris scanning without facial recognition was all but useless and the new feature race is now surrounding facial recognition, now that Apple has been rumored to be preparing it for one of their next iPhone models debuting this fall.

A new report today notes that "Samsung Electronics' Galaxy S8, scheduled to be released at the end of this month, is appointed with the face recognition technology as a way to complement the iris recognition feature.

As the world's two biggest smartphone makers actively embrace the face recognition technology, the competition to get the upper hand in the area of biometric identification is expected to flare up further.

Other sources said, 'The development of face recognition technology for the software of the Galaxy S8 has already been completed.'"

More than likely Apple won't just introduce facial recognition as a biometric security feature for iOS and macOS. They're very likely to introduce other types of apps that they've acquired over the last few years including FaceShift and RealFace to show their command of the technology over Samsung's simpleton security feature. The next-gen smartphone war begins at a special New York event on March 29 introducing the Samsung Galaxy S8.