Home Archives Contact Us Subscribe Twitter Facebook Patently Mobile
Apple Thinks that 'Globalization is Great' and with Wages at iPhone Plants being US$256/month, it's Understandable
Apple's Augmented Reality Team is bringing in more Specialists to work on their Future Platform 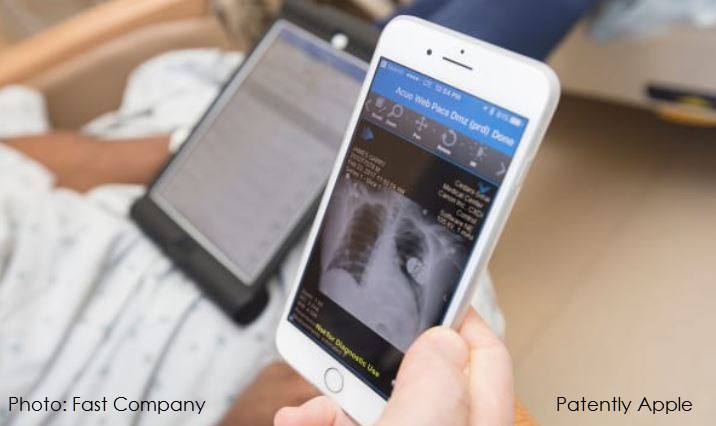 Apple has been working with the medical community for some time now. Apple published an "iPhone in Business" profile back in 2012 covering Toronto's Mount Sinai Hospital along with an overview video of how the iPhone was being used at the hospital. In 2014 Apple introduced HealthKit and then in 2015 they introduced ResearchKit to empower medical researchers.

Yesterday Fast Company posted an interesting report on Apple's focus on the Health Care Sector. The report notes that "For Apple, the $3 trillion health care sector offers a lot of potential for growth for its iPad. The company is likely to restate its commitment to the tablet device as early as next week, with the rumored announcement of the 9.7-Inch "iPad Pro 2."

From an enterprise sales perspective–a priority for the iPhone maker in the wake of recent partnerships with Cisco and IBM–large hospitals and health systems that shift to iOS tend to buy devices in bulk. 'We now have hundreds of iPads for patients to use,' says L.A.'s Cedars Sinai's Shaun Miller, who uses a compliant iPhone app called Voalte to text with other providers. 'As we expand to more wards, it'll be thousands.'

Cedars Sinai has also come a long way with its use of HealthKit and other iOS offerings. As of this week, patients can log in to their medical chart, click a download button, access a copy of their medical record, and port it to their Apple health app on a smartphone. That way, they can show it to any doctor they opt to see, even if they leave Cedars Sinai. This application might seem simple enough, but in health care it's 'cutting-edge,' says Darren Dworkin, chief information officer at Cedars Sinai, since until recently patients were burdened with the task of requesting and physically transporting their data on a USB Drive or CD-Rom if they wanted to share data between health providers at different institutions. That's in large part because electronic medical systems historically were developed for billing, not data transfer.

'Leading hospitals and health systems are using Apple products to transform all aspects of health care inside the hospital and beyond,' says an Apple spokesperson, emphasizing the 'privacy and security of iOS'" as a key factor for its growing popularity among hospitals for remote patient monitoring and in-patient care.

The report further noted that "Developers like Lanier and Patient Safe Solutions' Si Luo made an early bet that iOS would take off in health care. For them, Apple's public announcement about its first steps in health care with HealthKit couldn't have come quickly enough. 'We had been trying to sell iOS into hospitals for seven years, only to see tremendous uptick in recent months,' says Luo.

One of the earliest customers to come on board was Pueblo, Colorado-based Parkview Medical Center, which uses the Patient Safe Solutions app to help nurses manage patients' medications at their bedside. To help minimize errors, nurses can scan a patient's wristband to pull up a system on an iPhone that determines if the staff is administering the right medication at the right dose at the right time. The hospital also uses the app to ensure patients get the right blood for their type, as well as for voice and texting communications between nurses, doctors, and the pharmacy.

Luo recalls being invited to a meeting last winter with folks from Apple's growing health unit, alongside several chief information officers at hospitals and fellow iOS health developers. At that meeting, he says, the group discussed how various apps like Tonic Health and Patient Safe Solutions could integrate together, as well as three major issues with iOS that were causing some concern among the largest hospitals. According to Lanier and Luo, who both attended, those issues were: order fulfillment in device life-cycle management (meaning reassuring these enterprise customers they wouldn't need to order new devices in less than three years), security, and wireless connectivity.

Since this conversation 18 months ago, Luo says sales have jumped from 30 hospitals using the technology to 85 hospitals. He attributes the success to Apple making available an enterprise solutions architect by phone to reassure IT buyers about security and privacy, and a growing awareness of existing features like encryption of health data. 'Apple now feels like the safest choice,' he says and security analysts tend to agree with this assessment. For a lot more on this story check out Fast Company's full report here.