The U.S. Patent and Trademark Office officially published a series of 36 newly granted patents for Apple Inc. today. In this particular report we cover a possible Project Titan patent covering and enhanced in-vehicle situational awareness system that could alert drivers of approaching emergency vehicles such as police cars, cars about to pass your vehicle in addition to other type of vehicles in general. The system goes far beyond infotainment associated with CarPlay and covers the vehicle as a whole. This could lead to future patents explaining the connection to such parts as brakes, steering wheel, components controlling the vehicle and more that are the foundation in today's overall system patent.

Apple's newly granted patent covers their invention relating to mobile electronic equipment such as equipment in a vehicle and, more particularly, to systems in which a vehicle obtains situational awareness information from wireless transmissions from nearby vehicles.

Vehicles are sometimes provided with safety equipment such as parking sensors, lane departure warning equipment, and blind-spot detection systems. A parking sensor can be used to alert a driver when a vehicle is nearly in contact with a parked car or other stationary object, but has limited range and cannot be used to increase safety when a vehicle is being driven on a highway. Lane departure warning equipment can sense when a driver has started to drift into an adjacent lane, but does not warn the driver about vehicles in the adjacent lane. Blind spot detection systems can use radar or an infrared sensor to monitor a driver's blind spot, but do not offer complete coverage of areas around the driver's vehicle and provide no information to the driver on the nature of intrusions into the driver's blind spot.

Apple's invention covers electronic equipment in vehicles may transmit and receive wireless messages. Wireless protocols such as the Bluetooth Low Energy protocol may be used in transmitting and receiving the messages. 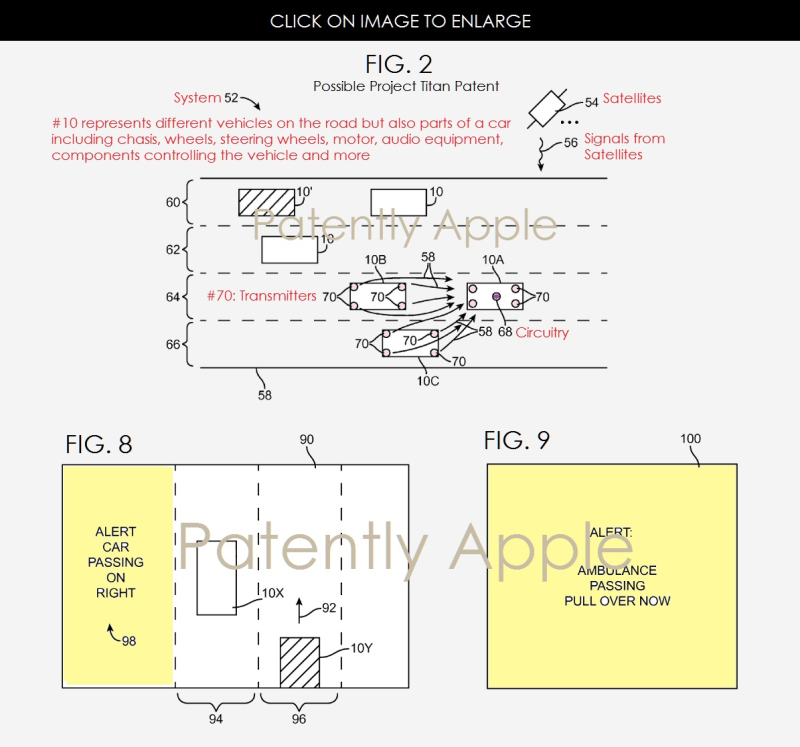 Each vehicle may contain multiple transmitters. For example, in a rectangular vehicle with four corners, a transmitter may be located at each of the four corners. Transmitters may be calibrated so that signal strength information may be used in gauging the distance between the transmitters and receiving equipment in another vehicle.

Received signal strength indicator information may be associated with the messages. Using the received signal strength indicator information and information on the locations of the transmitters within the vehicles in which the transmitters are installed, equipment in a receiving vehicle may determine the locations of nearby vehicles. Satellite navigation system signals may be used in identifying the location of a vehicle that is being driven. Electronic equipment in a vehicle may present an icon of the vehicle that is being driven on a display.

Apple further notes that "To identify itself and thereby provide surrounding vehicles with a desired amount of situational awareness, each transmitter may broadcast wireless advertisement messages that contain information such as the location of the transmitter within the transmitting vehicle (e.g., left front bumper, etc.). The wireless advertisement messages that are transmitted may also include information such as license plate information, vehicle identification number information, driver name and address, insurance information, and vehicle type (e.g., passenger car, van, truck, tractor-trailer, motorcycle, emergency vehicle, ambulance, police car, fire truck, etc.). To ensure privacy, sensitive information may be encrypted and/or partly or fully blocked, redacted, or otherwise anonymized."

Apple also notes that alerts and messages sent to the drive could come in the form of text and/or audio via Siri.

More specifically, Apple's patent FIG. 8 shows an illustrative alert of the type that vehicle #10 may display for a driver. In the example of FIG. 8, alert #90 includes a graphical representation of two lanes of traffic on a road on which the driver is driving vehicle #10. Vehicle icon #10X in lane #94 of alert #90 corresponds to the position of the driver's vehicle on the road. Vehicle icon #10Y corresponds to a nearby vehicle in adjoining lane# 96. Vehicle #10Y is passing the driver's vehicle on the right, leading to a potentially unsafe situation. Alert #90 may therefore contain text (or audio) that such as alert text #98 that informs the driver that an overtaking vehicle is passing the driver on the right.

Alerts such as alert #90 may be displayed on a navigation system display in vehicle #10 or on other suitable displays in the vehicle. Alerts may also be presented using sound (e.g., a chime, a beep, using voice output, etc.).

One of Apple's inventors listed on this patent was also listed on another Apple patent that Patently Apple covered back in July 2014 titled "Apple Invents Wildly Advanced Bumping Technology."