Apple Pencil was well received when first debuting with the iPad Pro. But the fact that the pencil didn't magnetically connect to the iPad for storage was a drawback as was how it was awkwardly charged. Apple has to date published a number of new proposals regarding future methods of attaching Apple Pencil to the iPad and Smart Keyboard along with a separate accessory. Today the US Patent & Trademark Office published a patent application from Apple that provides the most logical solution that addresses both initial drawbacks of the first generation of Apple Pencil.

Today the U.S. patent office published seven Apple Pencil patents that dive into the technical aspects of the Pencil in-depth. One example is titled "Active Stylus Precision Tip" and another is titled "Preprocessing for Nonlinear Stylus Profiles."

In one of the remaining patents, Apple buried two patent figures that we illustrate below that clearly present us with Apple's most logical Apple Pencil solutions to date. Apple illustrates how Apple Pencil could be magnetically attached to future iPad Pro models while recharging the Pencil simultaneously. 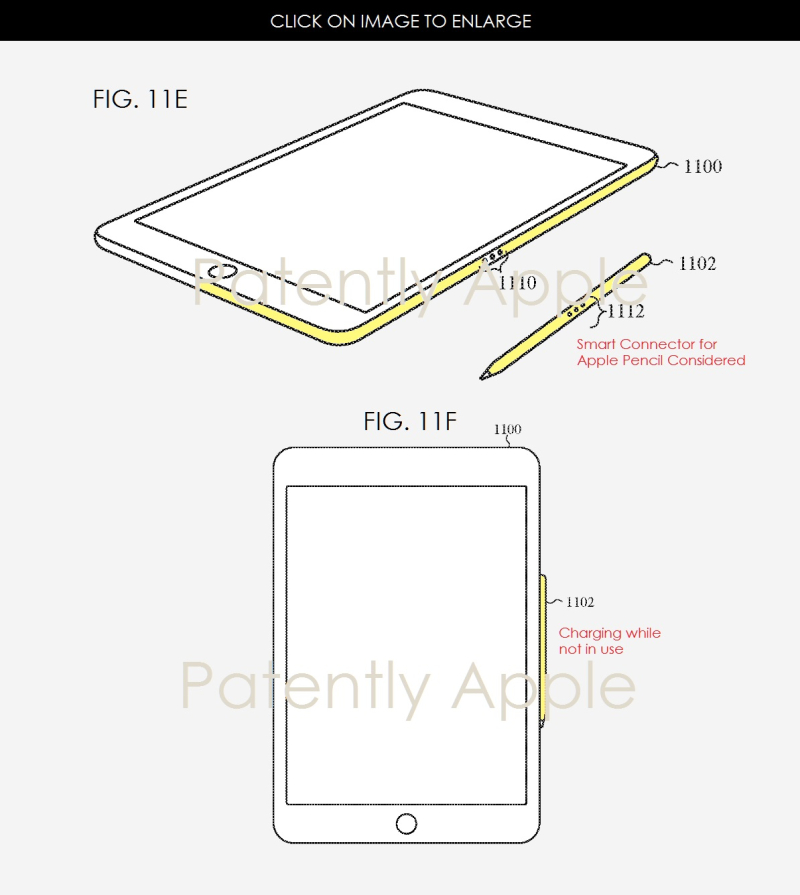 Apple's patent FIG. 11E noted above depicts a stylus incorporating a power connector that is configured to electrically couple to an external surface of an electronic device; FIG. 11F depicts the stylus and electronic device of FIG. 11E in a mated configuration.

Of course logic doesn't always prevail in the end, but it sure looks like the right solution for the next generation Apple Pencil that could be introduced when Apple refreshes their iPad lineup in the weeks (or months) ahead.