On Monday Patently Apple posted a report titled "Rumor Claims that the Anniversary iPhone will have a 2007 Retro-Design Modernized with Curved 3D Backside Glass." Today the US Patent & Trademark Office published a patent application from Apple titled "Glass Structure having 3D Shape and Uniform Thickness," which is proof that Apple has worked on such a design. Whether this design closely represents the one for Apple's anniversary iPhone is unknown. What's important in this invention is the method Apple has chosen to form 3D glass for future devices.

Apple's invention covers techniques for forming a curved substrate from a planar (or flat) substrate.

In one aspect of the invention covers a method for shaping a part formed of non-deformable material into a final formed part having a three-dimensional shape and a uniform final thickness.

One of the methods includes identifying a region of the part that is predicted to deviate from the uniform final thickness as a result of a shaping process, altering a geometry of the identified region in a manner that compensates for the predicted deviation, and shaping the part comprising the altered geometry using the shaping process that results in the final formed part having the three-dimensional shape and the uniform final thickness.

Apple's patent FIG 4A noted illustrates a shaping operation where a heated mold is pressed against the material to be formed such as glass. This glass would then be used to form a part of an electronic device such as a future iPhone. 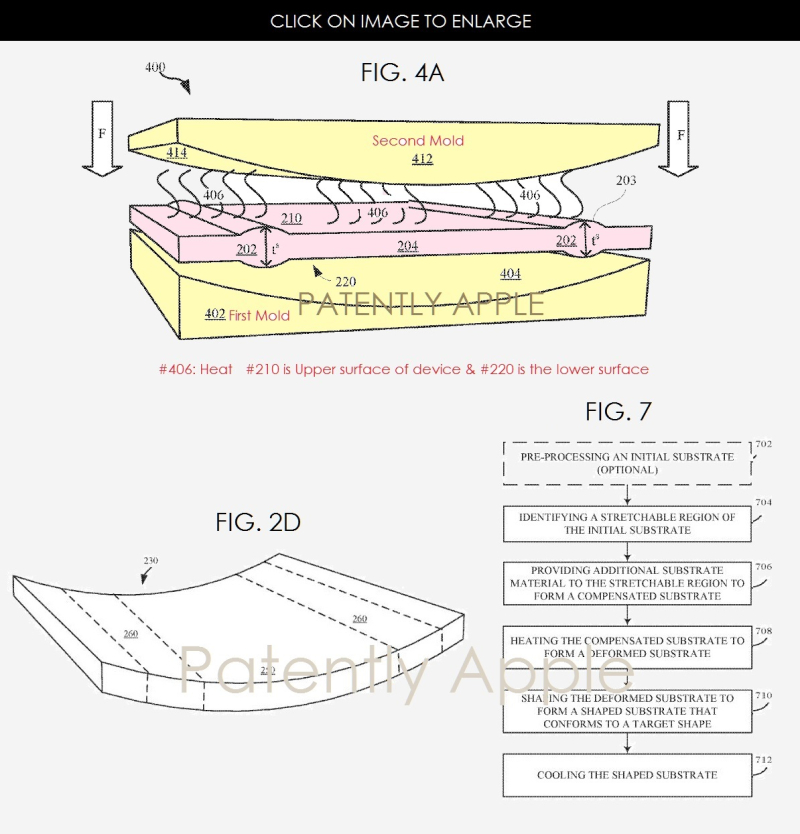 Apple notes that there are four common methods to form a 3D shape of glass from a sheet all of which involve heating glass near its softening point, then applying pressure or allowing gravity to shape the glass. The methods can be performed individually or in combination and include 1) slumping (or sag bending), where gravity force bends the sheet, 2) press molding, where the glass is pressed between a male mold and a female mold using active pressure, 3) pressure forming, where pressurized gas is used to push the glass sheet into a mold, or 4) vacuum forming, where a vacuum is used to pull the glass into the mold.

In some examples, the initial substrate can include pure silica (silicon dioxide) otherwise known as quartz glass.

Apple later hints of using liquid metal, a form of glass for the body of a device like an iPhone. Apple notes that "The term transition temperature can refer to the glass-liquid transition where an amorphous solid can transition from a hard and "glassy" state into a soft or rubber-like state. This phase of transitioning the compensated substrate from a viscous liquid into a glass state can be referred to as a vitrification process.

Apple's patent FIG. 7 noted above illustrates a method for forming a glass substrate having a three-dimensional curvature.