On February 20 Patently Apple covered a report about the latest Harris corporate Reputation Poll where we saw Samsung's reputation take a dramatic hit going from #3 in 2015 to #49 in 2016. In that same poll, Apple fell from #2 in 2015 to #5 in the U.S. Yesterday the Reputation Institute (RI), the world's leading provider of stakeholder measurement, membership and management services, announced their top 100 rankings for corporations. It was surprising to learn that Apple fall from #10 to #20 in a single year.

The report noted that "In the tech sector, Intel returned to the top 10 (to 8th place) in 2017 after a one-year absence. Meanwhile Google (5th place) fell 2 spots, Microsoft fell out of the top 10 to 11th, and Apple slipped 10 spots to 20th place with a drop of 1.7 points. Samsung posted the most notable decline with its RepTrak® Pulse score dropping 4.0 points vs. 2016 and is now in 70th place overall."

Michele Tesoro-Tess, RI executive partner, stated in the report that 'The annual Global RepTrak 100 spotlights the companies that truly understand what they stand for and how to reinforce the emotional bond with their stakeholders across all the markets they serve.'"

The results of Apple dramatically falling in the poll puts into question Cook's very public support for transgender washrooms that was a contributing factor in the State of North Carolina voting Republican this time around from being staunch Democrat in prior elections. That turned many voters off in 2016. While most CEO's are involved in causes of one kind or another, they're usually handled in a low key manner. Apple's Tim Cook on the other hand goes out of his way to be an activist and take one side of issues that are highly controversial to some shareholders.

On the other hand, a bad rash of MacBook Pro reviews this year along with other matters may have contributed to their reputation decline.

Unfortunately no official reasoning was provided in the report that would explain Apple's dramatic decline definitively.

With a positive year with strong product roll outs in 2017 and hopefully less politics, perhaps the tide will turn for the better next year.

On an annual basis, RI measures the reputation of thousands of companies using its RepTrak framework, and for its Global RepTrak 100 study measures the most highly regarded and familiar multinational companies in 15 countries, including Australia, Brazil, Canada, China, France, Germany, India, Italy, Japan, Mexico, Russia, South Korea, Spain, the United Kingdom and the United States. For more on this report, click here.

The top U.S. companies listed on the Reputation Institutes list for 2017 were The Walt Disney Company, Google and Intel. 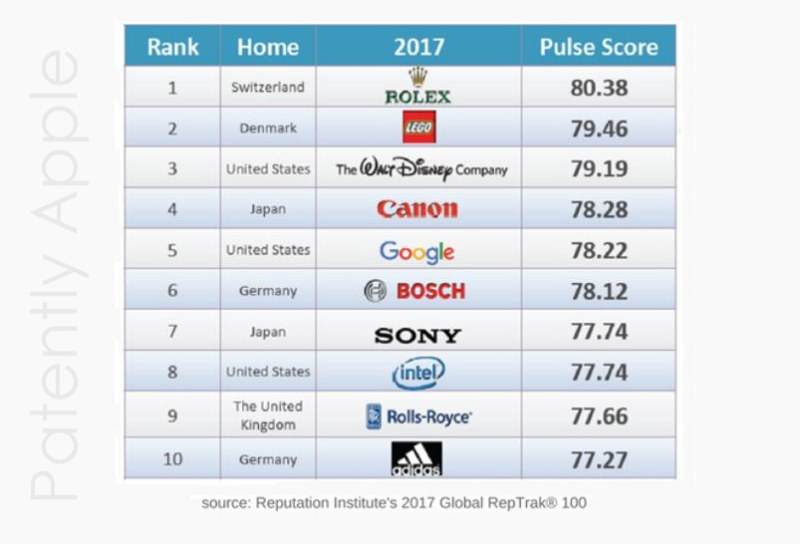