As the biggest smartphone show on earth gets set to open this week, the Mobile World Congress, companies like Samsung, Google and others are trying to get ahead of the news cycle. The first news to come out of Barcelona this morning is that the Google Assistant that was restricted to Google's own Pixel smartphone at Christmas will now be made available to many other Android partner brands starting this week.

Google has officially announced that "The Google Assistant will roll out this week to English speakers in the United States with phones running Android 7.0 Nougat and Android 6.0 Marshmallow.

English speakers in Australia, Canada and the United Kingdom will gain access to the assistant next, followed by German speakers in Germany, and the company is working on support for additional languages."

Voice-powered digital assistants have been largely a novelty for consumers since Apple's Siri introduced the technology to the masses in 2011. But many in the industry believe the technology will soon become one of the main ways users interact with devices, and Apple, Google and Amazon are racing to present their assistants to as many people as possible.

Reuters noted in their report on this today that "Companies ranging from appliance maker Whirlpool Corp to Ford Motor Co announced products featuring Amazon's Alexa assistant at the Consumer Electronics Show in Las Vegas earlier this year, leading some analysts to conclude the online retailer had gained an early lead over Google.

'Clearly Google needs to move forward because their battle in the future is not going to be over the operating system, it's going to be about assistant platforms,' said analyst Bob O'Donnell of TECHnalysis Research.

Google cannot trust that its assistant will be the default on all devices in the Android ecosystem. Leading manufacturer Samsung Electronics has announced plans for an assistant, and other companies are reportedly working on the technology."

We reported in January that Huawei shocked those at CES this year when they announced that they had chosen Amazon's Alexa for their new smartphone and Samsung has vowed to bring their new digital assistant Bixby to the Galaxy S8 and beyond.

Today Google is starting with English and later on add German. In contrast Patently Apple reported in February that Samsung's digital assistant would offer their service in eight languages, well ahead of the Google Assistant. 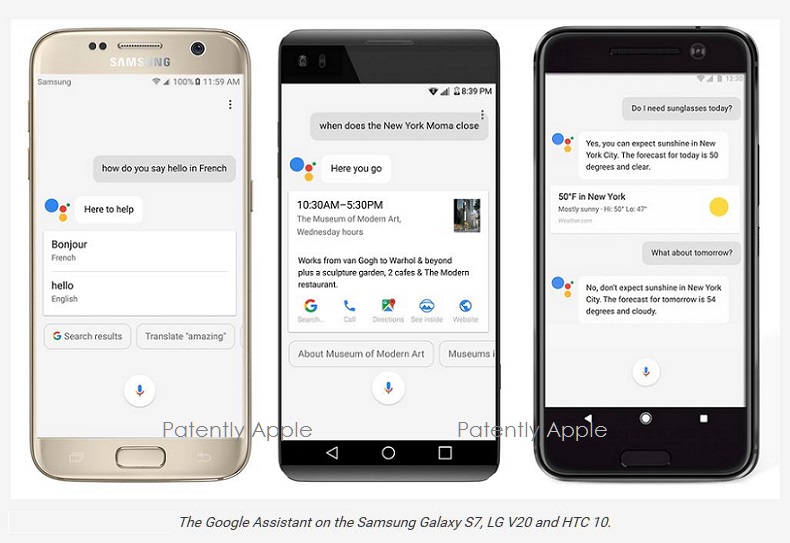 Even though Samsung will compete with Google, they will also make Google Assistant available on at least some of their devices. As noted above, Google added a graphic to their blog showing that the Samsung Galaxy S7, the LG V20 and HTC 10 will offer it immediately this week.

Google's Hafsteinsson ended his blog entry today stating that "Our goal is to make the Assistant available anywhere you need it. It came to Android Wear 2.0 via new smartwatches just a few weeks ago and as we previewed in January, the Assistant is also coming to TVs and cars. With this latest update, hundreds of millions of Android users will now be able to try out the Google Assistant."