Apple's Need for Slave Labor Clearly Overrides their Argument that a U.S. Plant is Impossible due to Supply Chain Issues 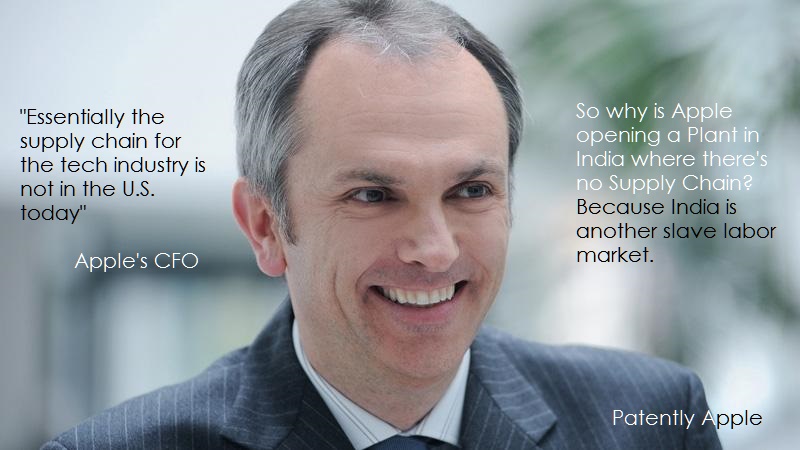 There have been many articles written about Apple's iPhone slave labor camps in China over the years and at the bottom of today's report I've listed a few in a random list. The BBC had announced on December 15, 2015 that they had created a documentary called "Apple's Broken Promises." You could review the full BBC documentary here. Below is just a snippet of that documentary.

Patently Apple wrote a damning report against the BBC report titled "The BBC Report About Apple is Motivated by Politics and Unions." At the end of that report I listed a series of other reports that I had written on the matter to that date – all pro Apple.

At one point I had read in a report (which is verified in one of the reports listed below) that Apple's CEO Tim Cook actually made the argument that making iPhones in China had nothing to do with slave labor but rather the fact that there was a sophisticated supply chain in China that couldn't be reproduced in the United States. No supply chain, no plant. Great argument. Two thumbs up.

But that myth was obliterated with Apple's decision to open a plant with Wistron in India. The battle royale with the Indian governement to date has been centered on a series of concessions with the leading one being that Apple will make iPhones in India but be allowed to import parts from China without penalty because there's no supply chain to speak of India and there won't be one for well over a decade, if ever.

To make this point crystal clear, this very subject just happened to come up again yesterday when Apple's CFO Luca Maestri spoke at Goldman Sachs investor conference. The Financial Times reporter stated in his report that Maestri suggested that it would be difficult for Apple to increase its manufacturing base in the US, which is one of President Donald Trump's key policies. Maestri stated that "Essentially the supply chain for the tech industry is not in the US today." Apple's propaganda continues.

So why is Apple racing to open a plant in India and fight it every inch of the way in the U.S. even with all-new tax breaks for Apple by the Trump administration. If it's not really about a supply chain as proven in India, then what's the hold back? One of the main reasons is the need to tap into slave labor just as the Chinese unions have been arguing for years.

By refusing to open an iPhone plant in the U.S. Apple knows all too well that the iPhone is likely to be hit with a huge import tax that Trump has promised. On that subject Apple's CFO Maestri stated yesterday that "It is very hard for us to imagine that a border tax would be good for the US economy. It is a tax that would end up burdening the end consumer."

It's hard for me to believe that Apple is openly willing to play political games on this issue leaving U.S. Apple fans to eat the penalty tax. Of course Cook will make it Trump's fault, but we know better.  I love Apple the company, but I won't pay a 40% tax on an iPhone over politics and I suspect millions will feel the same way. Who knew that Apple's CEO was a fan of Russian Roulette and willing to play with consumer and Wall Street loyalty like that? That's a game Mr. Cook may surprisingly not win.

If anything, their stubborn stance could open a huge door for a competitor like Microsoft to open. Not all iPhone users are purists and cultists. For many young fans its about the 'cool factor' and it's not going to be cool to get hit with a huge consumer tax courtesy of Apple's CEO. A local company making a quality smartphone could be a big winner here.

In the end I'll continue to cheer Apple on as always, applaud their patented ideas and laugh at Samsung and their competition whenever possible. But after years of swallowing Apple's take on slave labor, I give up. China's unions may have had it right all along and I was defending the undefendable. It seems to be more about slave labor than I could have ever imagined. The supply chain argument sure sounded good, didn't it? But recent moves by Apple have proven it all to be a myth. And you can't put the Genie back in the bottle once you see a lie for what it is.

Will Apple's CEO surprise us all with news of a U.S. Plant later this year or did Apple's CFO just take the wind out of that balloon? I suspect it's the latter.