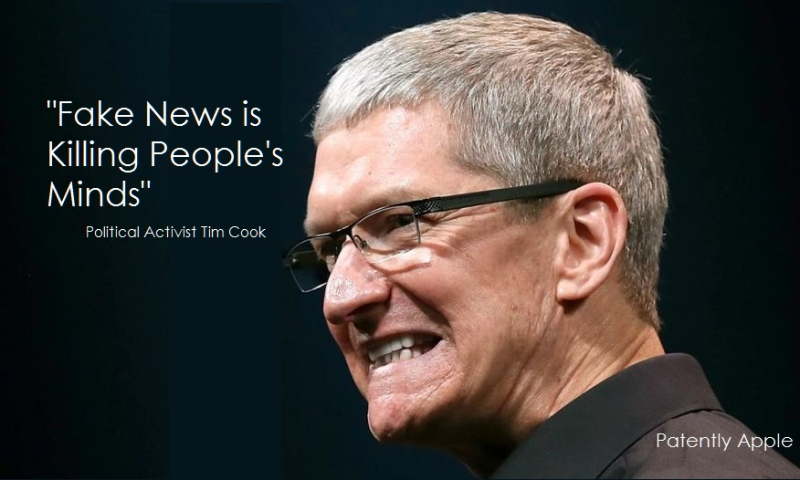 Yesterday Patently Apple posted a report titled "Fake News is unlikely Hurting Apple, so why is the CEO of Apple making it an Issue Today?" The report was brief and based on short statement that Cook made while on a British morning TV show. It was a simple report with a simple question. However shortly after the report, it was made crystal clear that it was straight-up politically motivated. Later in the day the Guardian posted a report detailing and elaborating on Cook's commentary that was quite revealing and more importantly, disturbing.

Apple's Tim Cook has decided to mount a cultural war that he claims is to combat Fake News when we all know that it will be a tool to assist the Democrats who are more inline with Cook's personal gay activist causes. Cook further noted that Fake News is "killing people's minds." If that's not an activist statement, then what is?

Cook called for governments to lead information campaigns to crack down on fake news in an interview with a British national newspaper. The scourge of falsehoods in mainstream political discourse came to the fore during recent campaigns, during which supporters of each side were accused of promoting misinformation for political gain.

"We are going through this period of time right here where unfortunately some of the people that are winning are the people that spend their time trying to get the most clicks, not tell the most truth," Cook told the Daily Telegraph. "It's killing people's minds, in a way."

Mr. Cook, does that include the Fake News from New York Times, CNN, The Washington Post and MSNBC? Because the so-called mainstream press presented off-the-wall and wall-to-wall anti-Trump rhetoric throughout the political campaign. I don't hear you talk about that danger.

Cook went on to say: "All of us technology companies need to create some tools that help diminish the volume of fake news. We must try to squeeze this without stepping on freedom of speech and of the press, but we must also help the reader. Too many of us are just in the 'complain' category right now and haven't figured out what to do."

He said that a crackdown would mean that "truthful, reliable, non-sensational, deep news outlets will win," adding: "The [rise of fake news] is a short-term thing. I don't believe that people want that."

While instances were seen among supporters of both sides of the recent US election battle, Donald Trump's campaign was seen by many as a particular beneficiary of fake news reports.

Hillary Clinton was scrutinized over her claim that there was 'no evidence' her emails had been hacked because the FBI director, James Comey, had concluded it was likely they had been.

Nevertheless, Cook demanded action to decrease the reach of fake news. "We need the modern version of a public service announcement campaign. It can be done quickly, if there is a will." For more on this read the full Guardian report here.

The Democrats and Silicon Valley executives including Tim Cook who mounted a campaign against North Carolina to force transgender washrooms, is the same group now using 'Fake News' as one of their excuses for why Clinton lost the election. Didn't that campaign backfire and lose the State of North Carolina to Trump? Oops.

Will Cook create software to stop lying ads from Democrats during an election cycle as well? Clinton's ads were off the wall crazy and full of lies and exaggerations. Was calling Trump supporters 'deplorables' okay with you Mr. Cook? Because it sure pissed-off a lot of decent church going, hard working Republicans enough to get out and vote against that Hate Speech. Or is it only hate speech if it's against gays?

CNN was one of the biggest liars during the presidential campaign and Clinton got the questions from a CNN reporter ahead of a CNN debate. CNN fired the source (right, politely accepted her resignation because they got caught). But somehow I'm supposed to trust CNN because gay activists Anderson Cooper and Don Lemon are going to tell me the truth? Give me a break.

Yesterday when I pointed to Fake News being a huge deal with Silicon Valley, I was criticized – but it's clear from Cook's aggressive campaign that it's an official "Apple project" now that will be supported by software. Do you believe this?

It's really sad to see Cook stoop to this level politically. While no one wants Fake News, you can't have left wing democrat CEO's in Silicon Valley determine where the line is and create software to filter out just what they deem to be unacceptable. People have minds, let them debate matters. That's what makes the internet a powerful tool. It's why we, Democrats and Republicans, buy shiny new iPhones for. To read the news from sources that we decide to choose to hear from, not Silicon Valley.

It's now clear that the "cultural war" from the left is going to new extreme measures and in-part it will be led by Tim Cook and financed by Apple profits that also come from decent Republican customers. It's a disgusting revelation plain and simple and abusing the trust of Apple customers.

When Cook "came out" of the closet to confess he was gay, he told BloombergBusiness that he didn't consider himself an activist. Mr. Cook, be honest, that was definitely FAKE NEWS. You're one of the most activist CEO's that I've ever come across.

Drawing from Cook's own commentary, those who voted for Trump over Clinton, must have had their minds killed to have voted that way. And we're supposed to trust Apple to make software to filter out their version of Fake News? My lord, what a blemish on Apple's reputation. I can't believe that Apple's board of directors are going along with this. What a shame.

If you don't agree with Tim Cook's left wing politics, that's okay, he's working on an app for that.

In the end Apple has now gone full circle. In 1984 Steve Jobs created a famous TV ad showing that Apple was fighting big brother. In 2017 Tim Cook has declared that Apple will create 'Big Brother' software to brainwash us all to his side of the political realm. He will help cleanse our minds like a true religious zealot; a modern Silicon Valley Mullah. What a difference a CEO makes. Lord do I miss Steve Jobs more than ever today.