The U.S. Patent and Trademark Office officially published a series of 58 newly granted patents for Apple Inc. today. In this particular report we cover Apple's invention of adding new force sensors to the Apple Pencil body. This is different to pressure sensors or force sensors for measuring an artist's pressure applied to the tip of the pencil covered in another patent. According to Apple, the capacitive touch sensor electrodes may gather touch input when the fingers of a user touch Apple Pencil. The touch input may be wirelessly transmitted to the electronic equipment. The touch input may include touch gestures and other touch input in which a user's fingers move along the length of Apple Pencil and may include rotational information indicative of how the stylus is being rotated between the user's fingers. Apple Pencil may have input-output devices such as buttons, may have force sensors to detect tip and eraser press events. It may offer zoom and scrolling features via touch sensors and more.

Further, force sensor input may be provided in the form of single press events (e.g., single clicks), may be provided in the form of multiple presses (e.g., double clicks, triple clicks, quadruple clicks, etc.), may be used to provide continuous analog input (e.g., a force signal that varies continuously as a function of applied user force to control audio volume, line width in a drawing application) or may be combined with other user input to generate commands or other input for Apple Pencil. 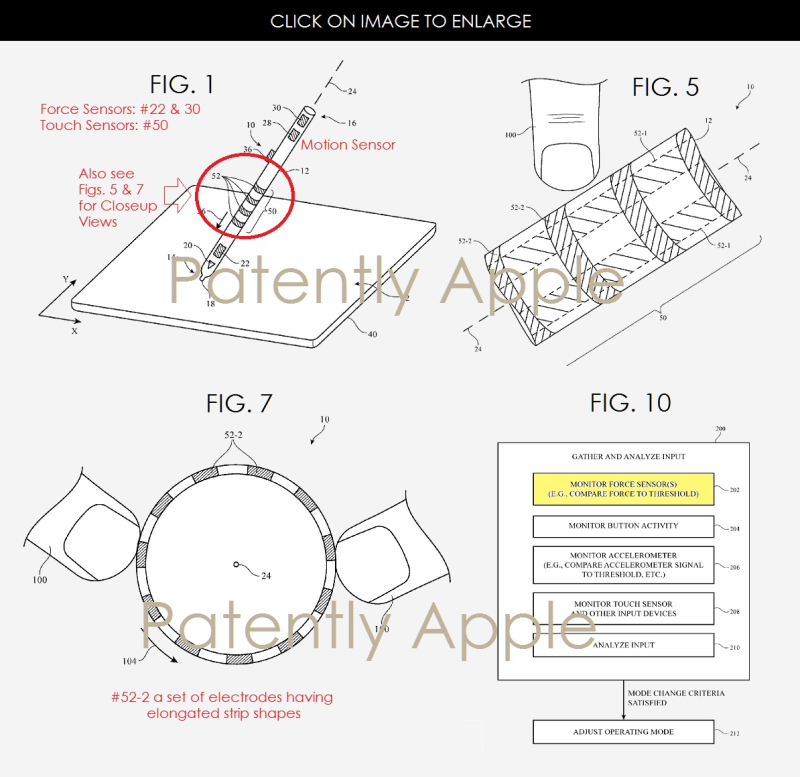 Apple also reveals new touch sensor #50 that could receive touch gestures from a user. For example, gestures such as flicks of the finger up or down the length of sensor 50 may be used to impart scrolling motion to the screen being displayed on a device like the iPad Pro (or possible future iPhone Pro). The scrolling motion imparted by a flick gesture may be different than the scrolling motion that is produced when moving the user's finger slowly and continuously along the length of sensor #50. For example, a flick gesture may cause the screen to scroll at a rate that is initially fast until slowing to a stop without further input from the user. When a user slowly adjusts the longitudinal position of the user's finger on sensor #50, however, the screen may scroll up or down as appropriate and may come to a stop as soon as the finger is removed from the sensor.

Sensor #50 (or other portions of Apple Pencil) may also incorporate a force sensor. Touch input and/or force input may be used to control operations such as zoom operations. For example, applied force may be measured and used to control how much a displayed image or part of an image is zoomed during drawing. A user may also zoom in or out by exerting more or less force on the force sensor structures of the sensor

When Apple Pencil detects that a user has pinched or gripped it tightly (e.g., when applied squeezing force to sensor #50 is detected by a force sensor structure in sensor 50), the amount of drawing precision that is provided to the user may be adjusted.

Force sensor input and/or touch input may, if desired, be used to implement an invisible button for turning on/off a hover mode or for enabling functionalities such as a spray air pen function.

Force sensor and/or touch input may also be used to perform click and pinch operations (e.g., clicking and pinching operations can be used to "pick up" an object and when combined with the inertial sensor data (e.g., from a sensor such as sensor 28), this input may be used for manipulating objects off screen.

Other operating parameters may be adjusted using gestures and/or other touch sensor inputs if desired (e.g., audio volume, screen brightness, hue/contrast settings, or any other setting in a program operating on iDevices). 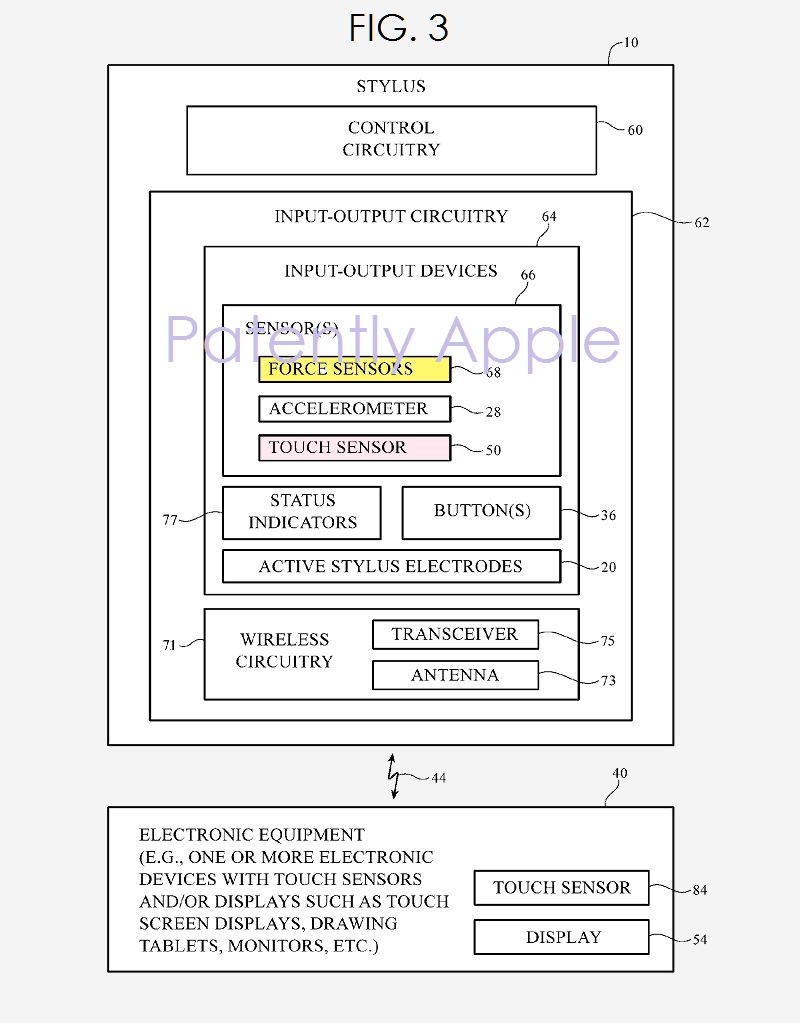