Back in 2012 Apple's engineers were working on multitouch skin technology that would allow Apple one day to create next-gen devices that are multi-dimensional in nature such as a multi-touch world globe or sphere or a TV remote that would provide multiple touch areas including the sides as noted in our cover graphic. Apple could license the technology to car companies for creating multi-touch skin based steering wheels that could be responsive to gestures that could control an in-vehicle infotainment dashboard or answer the phone for hands free operation. Apple's invention would also be able to be used in the design of sporting equipment like a smart golf club, tennis racquet or hockey stick. Five years later and Apple is now calling it shear force sensors that could basically do the same thing. Apple thinks it could one day be integrated into smart keyboards, gaming joysticks and beyond. Think of an iMac turning on with a simple swipe of your finger at a designated area, eliminating a button. Unlike force sensors that work by applying force downward, shear force sensors work  with stroking or rotational motion. A lateral stroke on a display while playing a video game, for example, could be assigned a movement like jump.

Last week Patently Apple posted a report titled "Apple Patent Reveals Breakthrough Quantum Tunneling Touch-Sensitive Materials for iPhone, Smart Cases & More." Technically last week's invention is on the very same theme using the very technology that could make this week's invention come to life on many devices. Today we hit one button for the audio to go up and another for the audio to go down. Eliminating buttons is what last week's invention covered and in today's patent filing It's the same thing. Apple could design a future iPhone where simply stroking the side of it in an up or down motion could control volume without the need of physical buttons.

Below you'll see a series of patent figures illustrating the types of devices and shapes of devices where shear force sensors could one day apply. In the first set of graphics Apple shows us that the technology could apply to iDevices, MacBooks and any kind of display. Apple shows us in FIGS. 4 and 5 that the sensors work with lateral pressure movement. 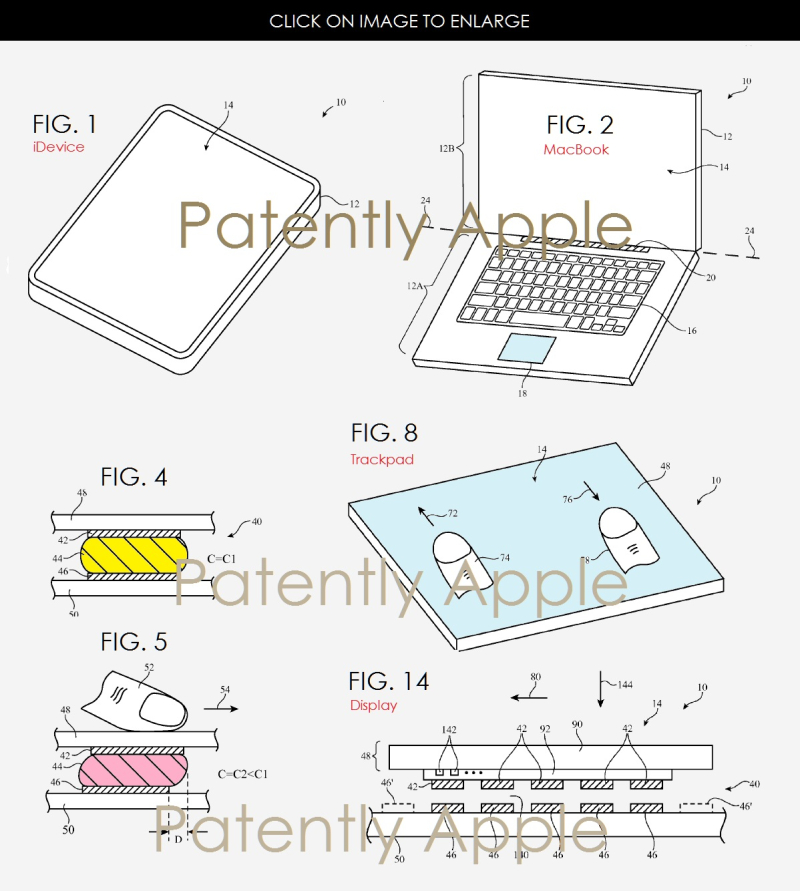 Apple notes that rotational motion may be detected using shear sensors as well. Consider, as an example, joystick device #10 of FIG. 18 below. Shaft #122 of device 10 may be mounted to base #150 and may extend along longitudinal axis #120. Inner shaft structure #50 may be attached to base #150. A user may grip the outer surface of the shaft and may twist outer structure #48 of the shaft about axis #120 relative to the inner structure. The shear force sensor #40 is mounted between structures #48 and #50 so that movement of structure #48 in direction 80-1 or direction 80-2 as the user twists the shaft about the axis #120 will result in capacitance changes at the output of the sensor #40. 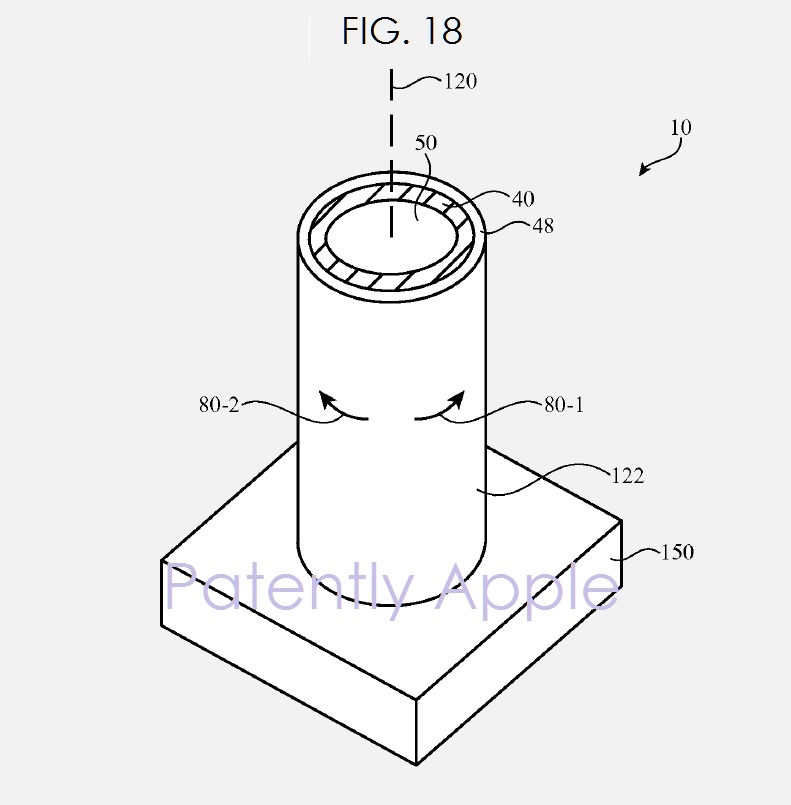 A user may twist the outer structure #48 relative to inner structure #50 about axis #120 in directions such as directions 80-1 and 80-2. Once again the shear sensor #40 may be coupled between structures #48 and #50 to measure this twisting (shearing) motion and thereby supply appropriate output to control the circuitry #30.

If desired, shear sensors may be configured to detect shearing movements along directions #160 (e.g., parallel to line #120, which runs through the core of structure #50 in the example of FIG. 20).

Force sensors may also be used to detect inward compression of structure #130 in direction #162 (e.g., when a user squeezes the structure). 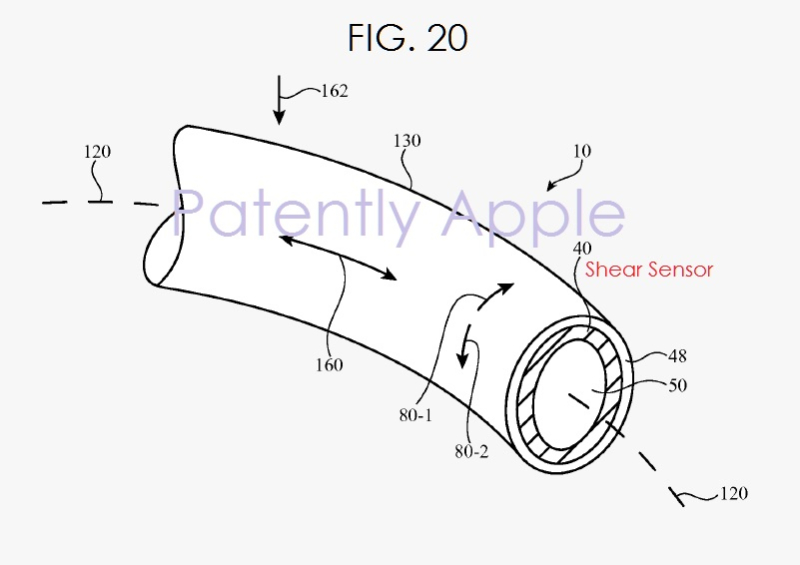 According to Apple, shear force sensors may also be used in a keyboard or other button-based interface (e.g., to provide an input mechanism for gathering cursor positioning input or other user input).

In the example of Apple's patent FIG. 19 below, the keyboard (#16) contains an array of keys (#128). One or more of the keys may each be provided with one or more shear sensors, as illustrated by sensors 40 of FIG. 19.

As a user applies shear force to the upper surface of the keys, they may shift laterally within the X-Y plane in directions such as directions #124 and/or #126. The control circuitry may use these sensors to detect this shearing motion and then take appropriate action in response. 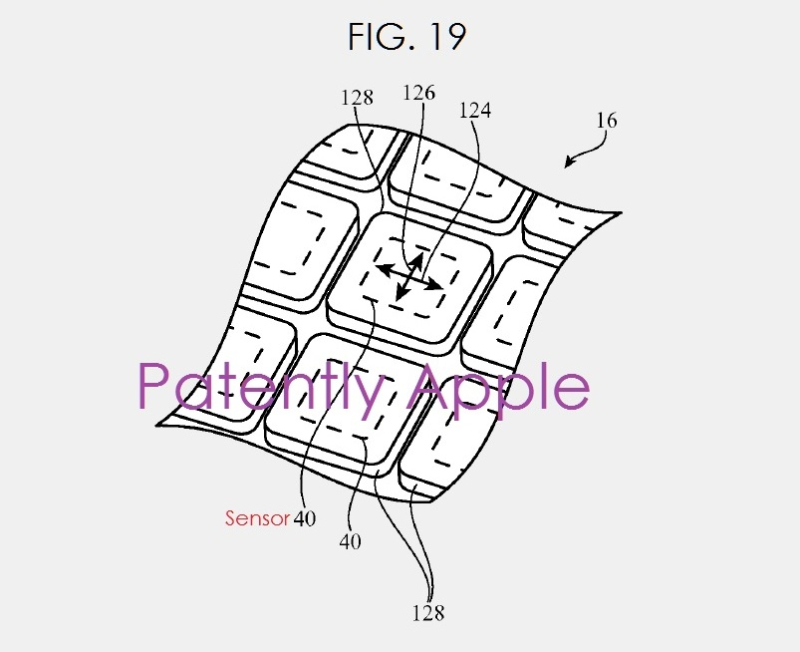 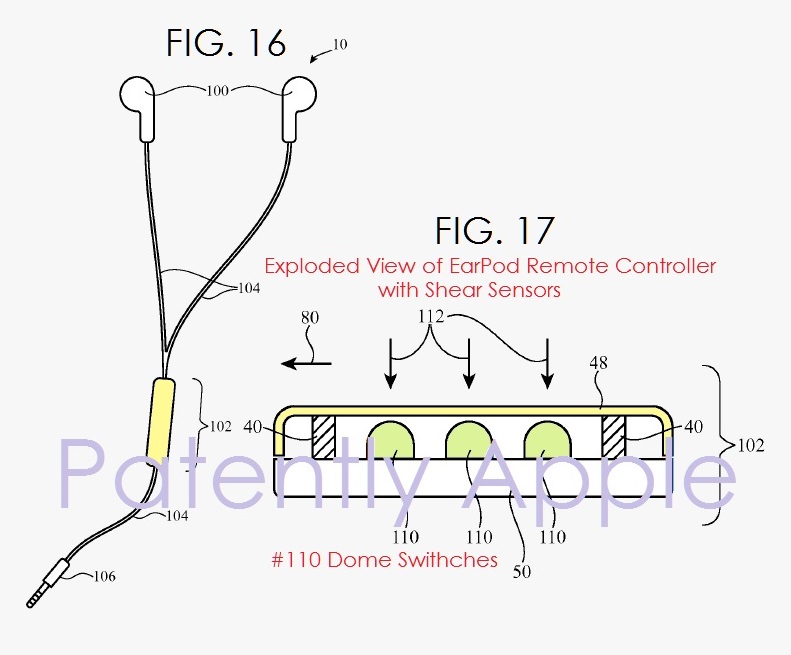 Apple's patent application was filed back in Q3 2015. Considering that this is a patent application, the timing of such a product to market is unknown at this time.To review Apple's original 2012 invention relating to multitouch skin click here.

As a side note, Patently Apple has updated our categories section over the last few weeks to eliminate many old entries that no longer apply. The change today is the old "Haptics & Tactile" category is now "Haptics and Sensors" where this patent will be filed. Older sensor reports will not be present at this time.