In 2015 Motorola had conducted a survey relating to cracked smartphone screens. The results found that 50 percent of people globally have experienced a cracked smartphone screen at least once. Interestingly enough the U.S. had the smallest overall percentage at 34 percent while India had the highest with 65 percent. Today the US Patent & Trademark Office published a patent application from Apple that reveals methods for detecting damage to a portable electronic device. More particularly, the present invention discussed the integration of a new sensor for detecting hairline cracks and alerting the user that actions were taken to shut down some aspects of the system for safety reasons. The new sensors will provide Apple with exacting feedback so that future displays could redesigned correctly to provide greater resistance to cracked glass due to accidental falls.

While various ways of reinforcing and strengthening these devices to account for these types of events have been developed, certain portions of the devices can still remain quite susceptible to breakage and/or degradation.

Unfortunately, device designers are often unable to get much data about how and in what circumstances a coverglass component is most likely to break. For this reason, the device designers do not always have the data necessary to add features to the device that can help to mitigate coverglass breakage in common fall scenarios.

Apple notes that even though coverglass technology has enjoyed rapid development leading to increasingly durable glass and plastic materials, the coverglass component continues to be one of the most likely components at which a device receives substantial damage when the device is subjected to externally applied forces.

One way to help to mitigate problems associated with breakage or damage to the coverglass is to develop a new sensor or adapt an existing sensor for detecting incidents of coverglass breakage. In some embodiments, sensors within the device can be configured to detect any fracture or cracks propagating through the coverglass.

In some embodiments, orientation sensors within the device can be used to generate alerts that direct the device to initiate a scan of the sensors associated with the breakage detection system to determine the following: (1) whether or not there had been a breakage; and (2) how severe any detected fractures had been. For example, when the accelerometer or other spatial/orientation detection sensors detect a deceleration of the device consistent with a fall, those sensors could send a message to the processor. In response to the message, the processor could then initiate a sensor scan for cracks in the display cover. In many embodiments, detection of a crack can be assumed when a significant change in readings from the crack detection system occurs. In some embodiments, data stored within the device can be used to correlate the changes in readings with likely positions of cracks in the display cover.

Once the cracks are detected, any number of actions can be subsequently performed by the device. In some embodiments, a simple message could be sent to a user of the device, informing the user the display glass has been broken. This notification could be very beneficial in cases of a hairline crack where a user might not even realize the presence of a crack.

In some embodiments, diagnostic data describing the conditions before and after formation of the crack could be sent to a manufacturer of the device to help optimize future devices so that they are better adapted to resist display cover cracking.

In some embodiments, a more detailed message could be sent to a user of the device informing them of any sensors or systems that would be affected or disabled due to cracking of the display cover. 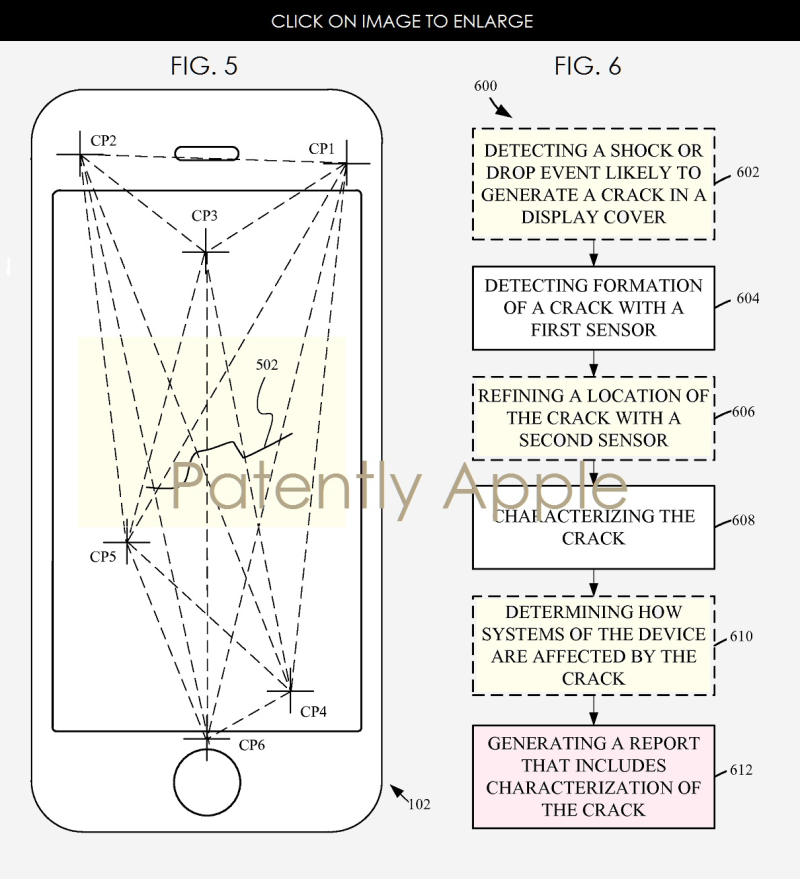 Posted by Jack Purcher on February 16, 2017 at 06:01 AM in 1A. Patent Applications, Devices, Components, Display Technology | Permalink | Comments (0)