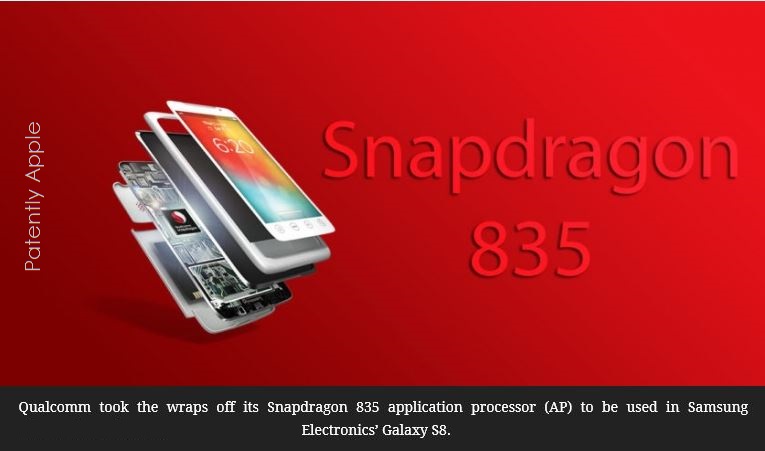 Samsung has notified their partners that the company is going to order parts for 10 million next-gen Galaxy S8 smartphones. One Samsung partner told the Korean press today that "We received an order from Samsung Electronics to start delivering components for Galaxy S8 starting from February. This indicates that Samsung Electronics is ready to mass-produce Galaxy S8s." The report further specified that "Samsung Electronics is going to produce 5 million of them in March and April respectively and release them globally at the same time. The Galaxy S7 sold 10 million to set a record and it's believed that the Galaxy S8 will easily surpass that. Of course such hype is traditional for Samsung and it doesn't always material as hoped for.

In October Patently Apple posted a report titled "Samsung to Kick-Off 2017 with the World's First 10nm CPU Powering their Galaxy S8." This was confirmed today in another Korean report today.

The report noted that Qualcomm finally took the wraps off its Snapdragon 835 application processor (AP) to be used in Samsung Electronics' next strategic smartphone Galaxy S8 at CES yesterday. The company reduced the weight of the processor and lowered its heat generation rates in order to increase the utilization of virtual reality (VR) and augmented reality (AR) devices.

The Snapdragon 835 processor will be mass produced through Samsung Electronics' 10nm FinFET process.

Lastly, it's being reported today that Samsung will be introducing wireless Bluetooth earphones with the Galaxy S8 connected by their new AI assistant. The impression that the Korean publication makes is that this will come free with the new S8 unlike Apple's AirPods that come at a premium. That would really be a super bonus for Samsung fans if that rumor actually pans out. I find it a hard one to believe. However, due to their Note7 disaster they may want to really pump up their fans and kick start the New Year with a bang.

Below are a few other rumors about the Galaxy S8 what we've covered over the last few months: