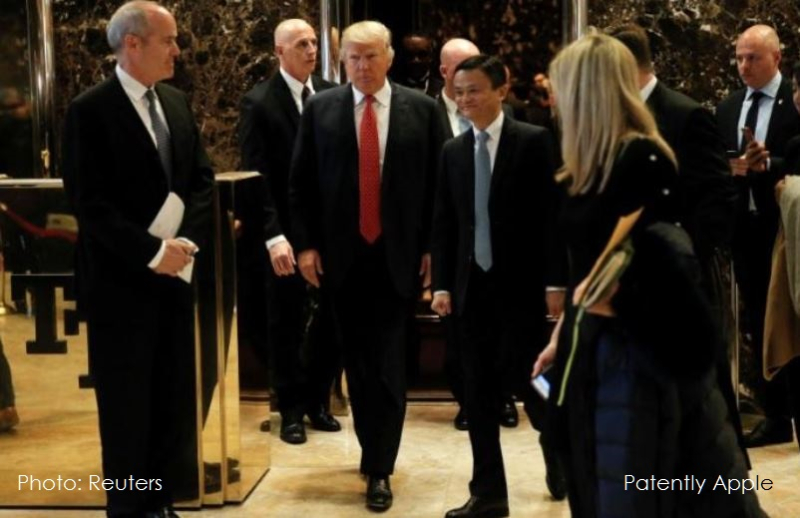 Earlier today Patently Apple posted a report titled "LG & Samsung Set to Announce Future Plants in the U.S. Due to President-Elect Trump's 'Made in America' Pledge." Unlike the Hollywood elites and so-called 'artists' that bashed Trump last night as expected, real business leaders and adults are taking President-elect Trump's words very seriously and are willing to work with him to create American jobs whether they be high-tech or no tech. The latest to meet at Trump Tower was Alibaba's chief.

According to Reuters, "Alibaba Executive Chairman Jack Ma met U.S. President-elect Donald Trump on Monday and laid out the Chinese e-commerce company's new plan to bring a million small U.S. businesses onto its platform to sell to Chinese consumers over the next five year, an Alibaba spokesman said.

Alibaba Group Holding expects the initiative to create a million U.S. jobs as each company adds a position. Trump and Ma emerged from their meeting at Trump Tower in New York together. The president-elect told reporters they had a "great meeting" and would do great things together. Ma called Trump "smart" and "open-minded." He said the two mainly discussed supporting small businesses, especially in the Midwest.

Ma said that businesses such as farmers and small clothing makers could tap the Chinese market directly through Alibaba. He called the meeting with Trump "very productive."