It's a Long Shot, but TSMC wouldn't rule out Opening a U.S. Plant to Support U.S. Customers like Apple and Qualcomm 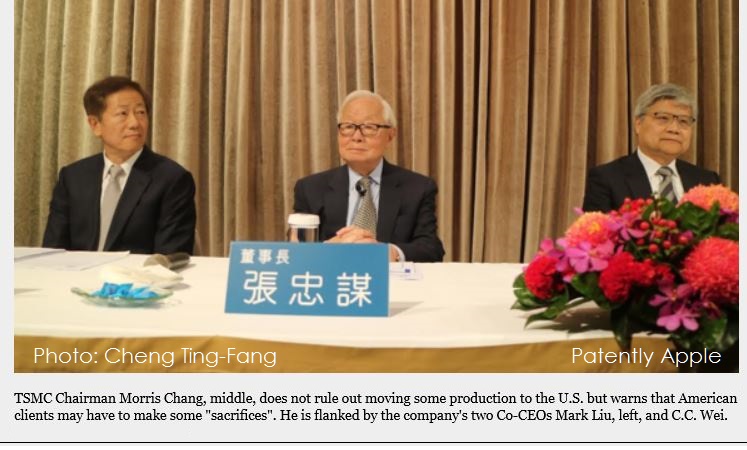 It's definitely the talk of Asia. Earlier today a Sharp executive revealed that a new Sharp/Foxconn plant is being planned for the US. Many Asian companies have made announcements about opening a plant in the US or are planning one and yesterday even TSMC's chairman said that they're now considering a plant in the US.

It's being reported today in Taipei that Chairman Morris Chang of Taiwan Semiconductor Manufacturing Co. stated yesterday that he would not rule out the possibility of building a new facility in the U.S. although its American customers including Apple, Qualcomm and Nvidia could suffer if its chips were produced there.

"I will not rule out [the possibility of build a factory in the U.S.] but I see a lot of sacrifices that we and our customers will have to make," Chang told investors and reporters. However, he added that he felt no pressure from customers to move production to the U.S., despite incoming President Donald Trump's pledge to move jobs home. TSMC is the world's largest contract chipmaker.

Apple is TSMC's no.1 customer and the Taiwanese tech giant enjoys a monopoly in the production of iPhone 7 and iPhone 7-plus chips, which are among the most expensive components used in the handsets. TSMC also supplies to Qualcomm, Intel, AMD, Nvidia, Marvell, among some 470 others across the globe. U.S. customers make up 66% of the company's record revenue of 947.93 billion New Taiwan dollars ($30.12 billion) in 2016.

Chang says "TSMC leads the industry with 55% of market share not because it uses cheaper labor, but because it has built an ecosystem of semiconductor suppliers in Taiwan. TSMC infrastructure and facilities allow thousands of the company's engineers to commute from one manufacturing site to another frequently in a very short time. Such advantages allow TSMC to produce efficiently and solve problems quickly to maintain a competitive edge. If we lose these advantages, our customers will lose too." Though in the age of teleconferencing is that really a problem?

At present TSMC only has a small manufacturing subsidiary, WaferTech, that hires around 1,500 employees in Camas, Washington in the U.S. In Taiwan, it employs more than 40,000 staff.

The report also noted that "TSMC announced yesterday that for the January-March period, TSMC forecast sales of NT$236 billion to NT$239 billion, representing a rise of 15.9 % to 17.4% from a year ago." However, it should be noted that this forecast contradicts a new DigiTimes report today.

The DigiTimes report states that "Pure-play foundry Taiwan Semiconductor Manufacturing Company (TSMC) has forecast revenues will fall up to 10% sequentially in the first quarter of 2017, and expressed caution over the prospects for the second quarter.

Lastly, Li said that TSMC will most likely continue to be the main supplier of processor chips to Apple's next iPhone model to be released in the second half of 2017.

About Making Comments on our Site: Patently Apple reserves the right to post, dismiss or edit any comments. Those using abusive language or behavior will result in being blacklisted on Disqus. Photo by Cheng Ting-Fang