Today the U.S. Patent Office published a patent application from Apple that relates to Dynamic Cinemagraph Presentations that could be used in documents, presentations and for publishers. Some embodiments of the invention provide novel methods for using cinemagraphs to produce visually stimulating document and/or document transitions. In some embodiments, cinemagraphs are defined as an animated GIF (Graphics Interchange Format) or in some other animated image format. In some embodiments, a cinemagraph can be a hybrid of a still image and a video. In one example, an iPhone user rotating the handset could start or modify the content on the display controlled by motion sensors.

Today, the competition between content publishers for the attention of the online viewers is quite aggressive. This is because there are many sources for the same type of content available through the Internet. In this competition, publishers need to differentiate their content from that of other publishers. Publishers also need to capture the viewers' attention to their content quickly. Otherwise, the viewers' attention may drift to the content of others.

Apple's invention provides novel methods for using cinemagraphs to produce visually stimulating document and/or document transitions. In some embodiments, a cinemagraph includes several images that have (1) one or more identical portions and (2) one or more portions that change across the images in order to provide an illusion of an animation within a still image. In some cases, the animation can include moving objects, changing colors in a scene, and/or appearing/disappearing objects in the scene.

The documents on which the cinemagraph presentations of some embodiments are displayed can include articles, webpages, blog pages, audio/video content pages, etc. They can also include documents that provide summaries to other documents.

Starting or Modifying a Cinemagraph presentation based on Motion 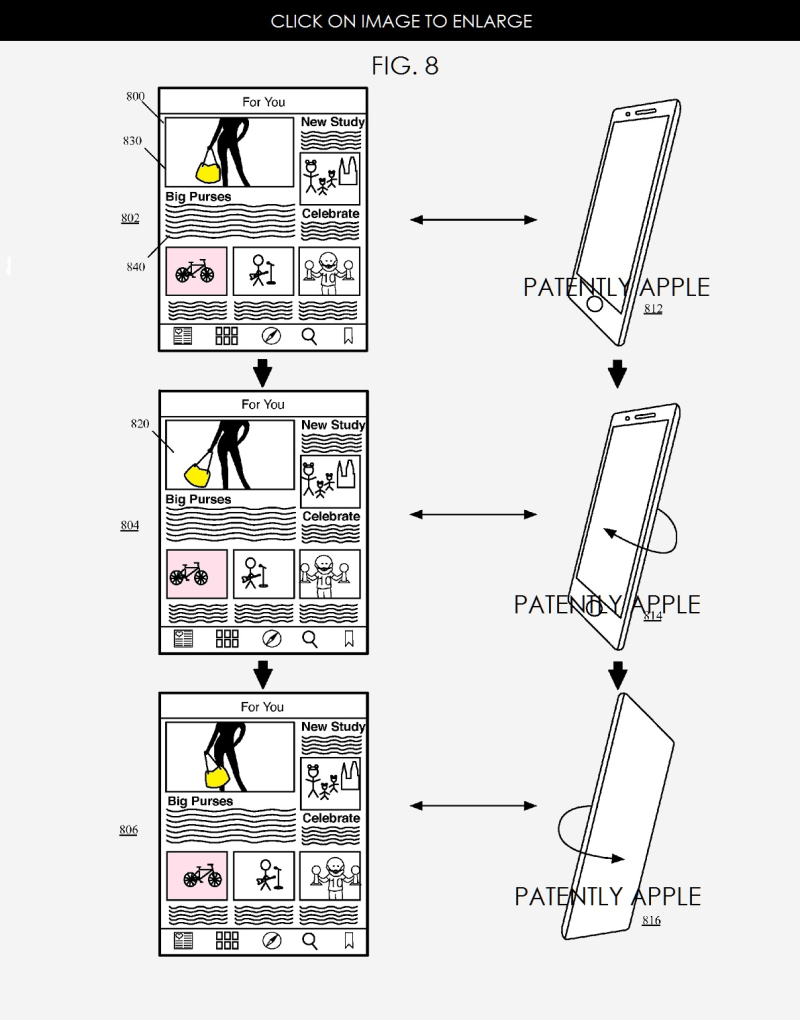 The motion sensor input in some embodiments comes from an accelerometer and/or a gyroscope of the mobile device.

Apple's patent FIG. 8 illustrates its example in terms of three operational stages 802-806 of the content viewer of some embodiments. As shown, each of these stages corresponds to a particular rotational state 812-816 of the device. Also, each stage shows a displayed document feed page 800 for each of the rotational states.

The first stage 802 shows the feed page before the device starts to be rotates. At this stage, the content viewer is not playing any cinemagraph presentations. The second and third stages 804 and 806 show the feed page after the device starts to rotate. As shown, this rotation starts a cinemagraph presentation 820 for one document summary 840 on a feed page 800. This cinemagraph presentation shows a woman standing still and holding a bag that swings from side to side. Before the scroll operation, the document summary's image component 830 presents a still image of the woman and the bag. In this static image, the bag does not swing, as shown in the first stage 802.

There are many, many examples to explore relating to this invention that you could review here. Apple's patent application 20170017616 was filed back in 14 2015. Considering that this is a patent application, the timing of such a product to market is unknown at this time.