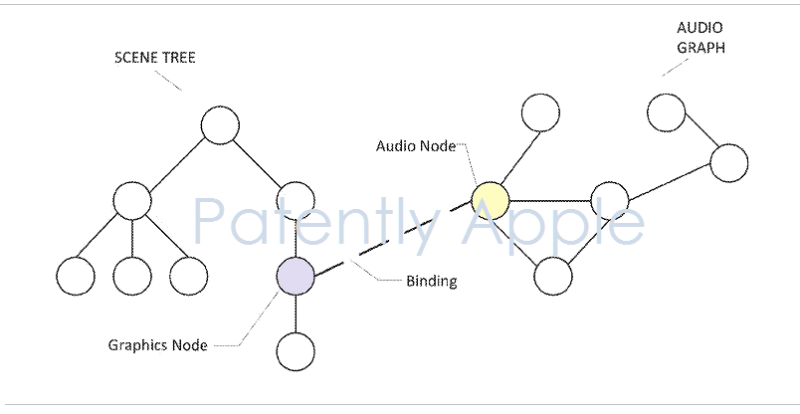 Last week the US Patent & Trademark Office published a patent application from Apple that revealed their invention that generally relates to the field of graphics processing, and more particularly to the field of automatic rendering of 3D sound. A framework is provided that supports an interface between a graphics framework and an audio framework. This will assist Apple gaming developers who use Apple's SpriteKit. Our cover graphic represents Apple's patent FIG. 4 which illustrates an example of a binding between a graphics node and an audio node.

Many programmers use graphics rendering and animation infrastructure as a convenient means for rapid application development, such as for the development of, for example, gaming applications. Many graphics rendering and animation infrastructures allow programmers to create 2D and 3D scenes using complex special effects with limited programming overhead.

For example, SpriteKit, developed by Apple provides a graphics rendering and animation infrastructure that programmers may use to animate arbitrary textured two-dimensional images, or "sprites." SpriteKit uses a traditional rendering loop, whereby the contents of each frame are processed before the frame is rendered. Each individual game determines the contents of the scene and how those contents change in each frame. SpriteKit then does the work to render the frames of animation efficiently using the graphics hardware on the hosting device. SpriteKit is optimized so that the positions of sprites may be changed arbitrarily in each frame of animation.

Three-dimensional graphics rendering and animation infrastructures are also commonly used by programmers today and provide a convenient means for developing applications with complex three-dimensional graphics, e.g., gaming applications using three-dimensional characters and/or environments. For example, Scene Kit, developed by Apple provides an Objective-C framework for building applications and games that use 3D graphics, combining a high-performance rendering engine with a high-level, descriptive API. SceneKit supports the import, manipulation, and rendering of 3D assets. Unlike lower-level APIs such as OpenGL that require programmers to implement in precise detail the rendering algorithms that display a scene, SceneKit only requires descriptions of the scene's contents and the actions or animations that the programmers want the objects in the scene to perform.

The SceneKit framework offers a flexible, scene graph-based system to create and render virtual 3D scenes. With its node-based design, the SceneKit scene graph abstracts most of the underlying internals of the used components from the programmer. SceneKit does all the work underneath that is needed to render the scene efficiently using all the potential of the GPU.

Apple's invention generally relates to the field of graphics processing, and more particularly to the field of automatic rendering of three dimensional (3D) sound. A framework is provided that supports an interface between a graphics framework and an audio framework. 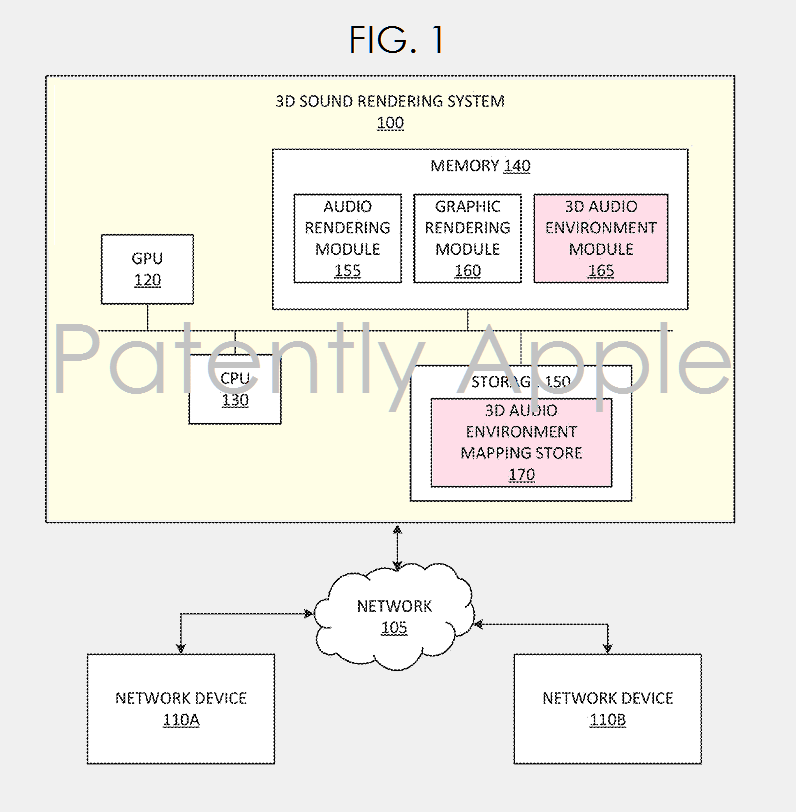 Apple's patent application 20160358364 was filed back in Q2 2015. The inventors were two Apple engineers from France named Thomas Goossens and Metrot Sebastien. Considering that this is a patent application, the timing of such a product to market is unknown at this time.