In August Patently Apple covered Apple's first invention relating to a future Apple Watch band having embedded haptic actuators to provide users with stronger feedback to notices and more. The core Apple Watch component will be able to communicate with one or more haptic actuators in the band which would allow Apple to have more room within the Watch to either add new components like a camera or to make the Watch thinner.

In Apple's August patent, FIG. 3 presents a top view of an Apple Watch attached to a possible future band that includes one or more haptic actuators. This design appears to be superior due to the fact that there are more haptic elements in the band to provide either different haptic effects or haptics that deliver more sensation than a single pin system noted in today's new patent application.

Today the US Patent & Trademark Office published Apple's alternative method of accomplishing the very same thing as their first invention detailed. This time they hide the haptics in an Apple Watch band pin that attaches to the main body of Apple Watch as noted in our cover graphic. 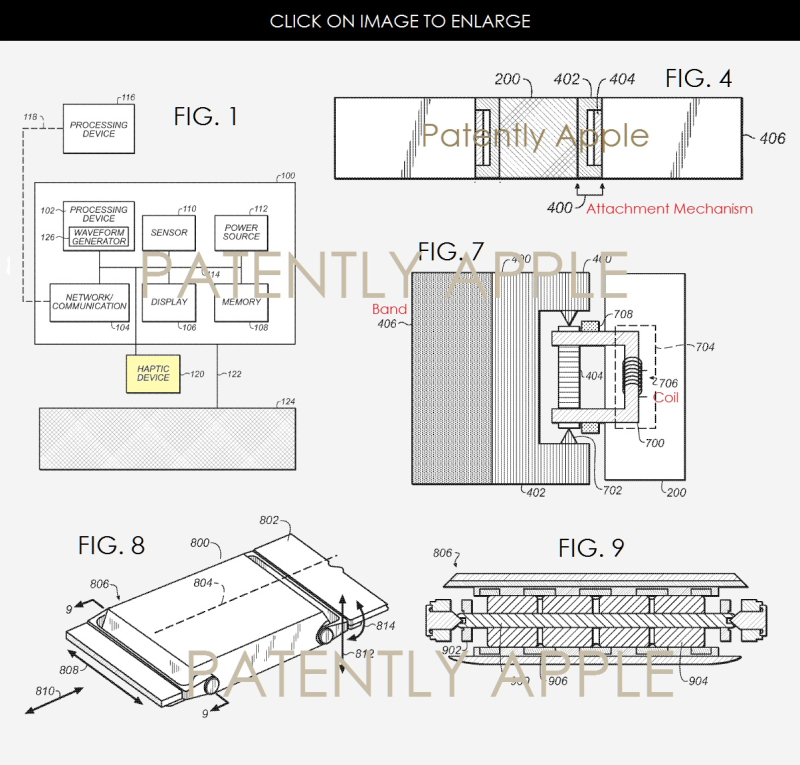 A processing device can be included in the electronic device that transmits activation signals to one or more haptic devices. Each haptic device can produce a selected force (e.g., pressure), motion, and/or vibratory response in an attachment mechanism that provides a tactile stimulation to the skin of the person wearing the band.

An activation signal can be sent at select times to a single haptic device or to groups of two or more haptic devices. Haptic stimulation can act as notifications for one or more events, such as the receipt of an email, a text message, a news story, a stock price, a reminder, and/or a low power state of a power source in the electronic device.

Another Apple Watch haptics patent was reported on back in July under the title "Apple is granted a Patent for the Haptics behind Apple Watch & Wearable Health Assistants."